VOTE ON THE NEW MONTHLY POLL and HOT/HOTTER TO YOUR LEFT!

I'm really surprised it has taken this long, but Broadway is finally catching up with the computer age.  As productions seek to make louder noise than every other production out there, it only makes sense, right?  I mean why not exploit everything that a computer can do to reach even more people who might be interested in seeing a Broadway show?

And so it comes as no surprise that in just the past week the PR people for two different incoming shows have asked me to promote their upcoming events: the revival of Death of a Salesman and Ghost: The Musical.

The new revival of Death of a Salesman has a special event TONIGHT being hosted at The Greene Space at 7PM.  Cast members Philip Seymour Hoffman, Linda Emond and Andrew Garfield will reveal what it feels like to perform in such iconic roles and discuss, along with director Mike Nichols, the creative process and the relevance of Arthur Miller's classic work in 2012. The event will be moderated WNYC's Elliot Forrest.  Ticket and event information is HERE.


The good news for those of us who don't live in New York City, is that the event will be simulcast in two places: at The Greene Space website or the show website.  Click on either link. 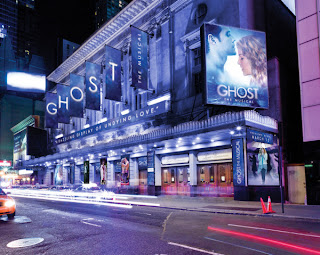 Recently, the folks over at Ghost:The Musical held a PR event at the Lunt-Fontanne Theatre, where the show will begin performances in March.  If you missed the live feed via Facebook, here is the event:


Broadway now at least seems to be catching up with the computer age.  Thanks to the people at both Death of a Salesman and Ghost:The Musical.  They are both very interested in your feedback, so please leave your comments here or email me at jkstheatrescene@yahoo.com with your ideas on what you've seen.  I will pass them along!