A couple of months ago, I let my cynical side rule my thoughts - and this blog - when I had to admit that I was sick of Broadway.  I found that misery loves company, as several of you wrote in and Tweeted similar sentiments.

But leave it to a natural disaster to help you gain some perspective.  "Super Storm Sandy" rolled through leaving a path of death and destruction.  The very least of it was having a few performances cancelled on and off-Broadway.  And as it has over and over again, the New York theatre community has rallied for the latest cause, using their considerable talents to lift spirits, raise money and awareness.

Broadway actor Jacob Brent (Cats) took to Facebook (word spread all over the Internet) and got a group of performers together to sing show tunes in Times Square for all of the stranded tourists.  Annie's Lilla Crawford led a sing along to "Tomorrow," Broadway's signature song of optimism.  And the event collected donations for the Red Cross.  A win-win.

Broadway Cares/Equity Fights AIDS donated a quarter of a million dollars to Hurricane Sandy relief efforts, including setting aside a portion of the proceeds from the current fundraising drive (for the Gypsy of the Year competition), as well as money for the Actors Fund, The Community FoodBank of New Jersey, AmeriCares, and The Red Cross.  For more details, click HERE.

And the cast of Wicked and Evita's Max Von Essen used this week's #SIP to promote, respectively, a clothing drive and donating via text to the Red Cross.  A lot of shows that were able start back up offered huge discounts and even free performances for stranded tourists and native New Yorkers alike. 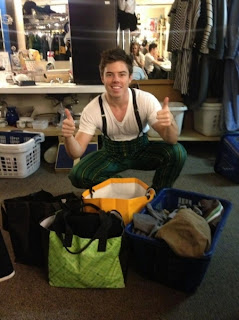 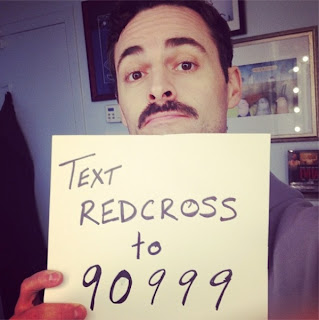 Leave it to theater people.  I love Broadway.

To contribute to relief efforts through The American Red Cross, click HERE.

Jeff
4.065
Comments? Questions? @jkstheatrescene (Twitter); jkstheatrescene@yahoo.com (Email); or leave a comment below and check a box!
Posted by JK at 3:34 PM