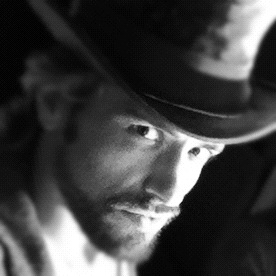 I am so excited to bring you a new series of interviews with another of Broadway's hardest working people, a true gypsy, The Mystery of Edwin Drood's Eric Sciotto!  In the show, he's part of the ensemble, and plays an important part in the final vote each night at The Music Hall Royale, aka Studio 54.  This time around, Eric talks about juggling family and career - when both parents work on Broadway.  He gives us this inside scoop on keeping his last show's dances razor sharp.  And shares the thrill of working with one of the Great White Way's living legends.

Question 1: In your Drood program bio, you mention your family!  "Proud father of two... husband, David" - congratulations.  How amazing is it that New York legalized same sex marriage, and now four other states have done the same?  Since David is also working on Broadway (most recently, he's worked on the choreography for Anything Goes and Nice Work If You Can Get It),  how does that impact the challenge of juggling your family and a successful stage career?

Eric Sciotto: First off...we actually live in NJ, and therefore cannot get married.  I question my choice to call him "husband" for fear that people might not realize that we are STILL not allowed by law to be husbands to each other.  However, after 11.5 years and 2 kids.... he's CLEARLY my husband.  We'd always planned to have kids, and always planned to do our best to keep one daddy home with the kids.... so initially juggling work and family was made easier by keeping one of us as SAHD (Stay At Home Dad) and one working full time.  We'd agreed to take turns.  The SAHD could also take short term work... so we both Vacation Swung for various shows while being the SAHD.  It helped with sanity and also income... because when we added mouths to feed, we halved our income.  Coordinating babysitting was a constant focus... not necessarily a challenge... and now Sammy is in school, so that helps...  It's not easy by any means.  But it's totally worth it.  I love my family and I love being a Dad.


Question 2: You've been in a lot of Broadway shows!  And you've had the opportunity to work with many big stars - John Lithgow, Kelli O'Hara, Bernadette Peters, just to mention a few.  What would you say has been the most interesting/valuable thing you've learned from working with famous people?  What is the one thing that audiences might find most surprising about working with such beloved actors?

Eric Sciotto: I have found, in my experience, that the BIGGEST and MOST TALENTED stars are often the nicest, most genuine people  around.  John Lithgow is like that, Reba McEntire! Chita Rivera! Bernadette Peters!  And Kelli O'Hara is actually one of my oldest friends, since we were dance partners in summer stock.... She's awesome!  Very thoughtful and caring and engaging people, and accessible and playful and silly! It's been beautiful icing on a spectacular cake to work on Broadway with some AMAZING people.


Question 3: OK, I have to ask... what was the trick to successfully dancing those elaborate routines in those "Gumby Suits" in Priscilla Queen of the Desert?  As the dance captain of that show what did you have to do to keep each production number sharp and fresh?

Eric Sciotto: Ha!  The Gumby Shoes were odd for a minute... they were giant foam half-spheres... but they were flat on the bottom... and they didn't weigh much... I guess the challenge was that they created a lot of drag - pardon the pun - and so lifting them was like fighting against the air... so the picking up of the legs and the lifting of the knees was very exaggerated out of necessity... probably not awesome for the knees.  To keep the show sharp and fresh, we just had to keep reminding and hammering home the "key words" or "defining details" of each number... since most of that was simple choreo with elaborate costumes... it was necessary to refresh the small style differences that kept each number from looking the same as the others.  "Pulled up." "Breathy." "Wiry and Tweaky." "Dream-like." "Effortless."

Question 4: The Mystery of Edwin Drood is kind of unique in terms of revivals.  Like most revivals, the show itself has fans who love the original (like me), but unlike most revivals, a lot of theater fans only know the show from the cast album.  In a lot of ways, it's almost like a brand new event.  I understand that Rupert Holmes (book, music and lyrics) has been very instrumental and "hands on" with the revival.  What kinds of things have happened during rehearsals to tweak the show for today's audiences, both new to the show and familiar with it?

Eric Sciotto: Drood has been an amazing and very singular experience!  The uniqueness is not lost on me! I'm THRILLED to be involved   I actually knew pretty much NOTHING about the show until I was cast....but yes, people who know this musical really know it and really love it!  Rupert Holmes was indeed around almost every day, and very involved.  I do not have much knowledge of the original production, but I would say that one thing that's very different is that today's audience are used to voting for things (Think American Idol and SYTYCD....) whereas in the 80's they were not...  And this version is definitely pieced together differently, using the original and the London, and cobbling together a new version! Rupert's been LOVELY to work with!  So happy to have him so hands-on with this production!


Question 5: Finally, let me quote again from your Drood program bio: "ERIC SCIOTTO (Ensemble) is incredibly grateful to be a part of The Mystery of Edwin Drood, and overwhelmed at the thought of working with the legendary Chita Rivera! " "Legendary" is right!  Has this experience working with her been everything you dreamed it would be?   Details, please, for all of us that wish we were in your shoes!

Eric Sciotto: Oh my!  I can barely deal with this question without crying a little.  Chita has been my inspiration and my idol for as long as I can remember.  Since I was young, I had three very specific dreams for my career.... 1) to dance at Disney World (which came true in 1994) 2) to sing with Bernadette Peters (which came true in 1999 with my Bway debut in the AGYG revival) and 3) to dance with Chita Rivera..... For real.  I'd met her once when we overlapped in shows at PCLO, and for a long time, I had decided that that may have to suffice.... but then I got Drood!  I had heard nothing of the principle casting until my agent called with my offer.  He said "it's gonna be great, it's got SJB, and Will Chase, and Chita Rivera...." UMMMM.... EXCUSE ME?!?!? "Yes, Chita Rivera."  I couldn't speak and I didn't stop crying with joy for 4 days.  Every time I thought about it I got weepy.  Seriously this is a HUGE DEAL for me.  And Chita could not be more lovely or wonderful or fun or caring and just one of my favorite people in the world!  I am in awe every day of this amazing legend and I am NOT taking it for granted!  I am VERY LUCKY to be able to watch her and experience her every day.  I'm learning a lot!  And... we have playful moments.  I'm beside myself!  Elated!  One of my favorite moments was when Chita said to me "I was thinking about you yesterday while I was decorating for Halloween!"  WHAT?!?!  I'm a huge Halloween fan and she was putting lighted skulls out in her yard... and it made her think of me... on her day off.... I smiled and laughed, then later shed a little tear.

Thanks, Eric!  Look for more with him soon!