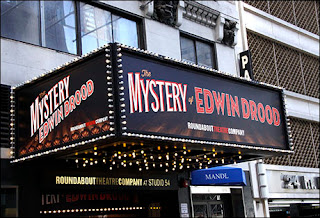 The title of the show is probably the one thing that sells a show the most, once it gets your attention.  Maybe the logo is a striking color, or there is a famous actor's name in huge letters above the title.  But once your attention is gotten, it is the title you likely consider most.  No wonder that producers clamor for movies to make into musicals, and why plays are a harder sell.

Back in 1985, the Public Theater had a doozy on its hands with The Mystery of Edwin Drood.  First of all, it sounds like a play title - musical mysteries were (and still are) rare.  Second, who or what is "Edwin Drood"?  And even if you bring up Charles Dickens as the author, who has heard of this unfinished book, right?  So they threw in a subtitle: "The Solve-It-Yourself Broadway Musical".  OK, it's a musical... but "solve-it-yourself"?  We were decades away from audience participation television shows.  It proved such an issue that the original production officially changed its title to Drood: The Music Hall Musical.  Again, what the hell is a "Drood"?  A music hall?  YIKES!

Some 27 years later, the problem remains the same, though 5 Tony Awards, a star-filled cast and an audience raised on voting for their favorite performers, will likely make it easier.  The new production at Studio 54 produced by Roundabout has a pretty good logo that should certainly work for the show, not against it. 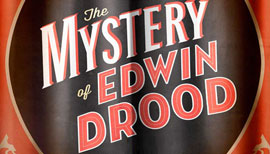 First of all, they handle the title well, with its old-fashioned mix of type-styles.  The "filler words" are in a small sized, old-style cursive, which actually draw your eye to the main words, like bright asterix.  The most provocative word in the title, "mystery," in a bright white, red-trimmed color.  The font is bold, and with its caps-as-lower-case style, it gives off an appropriately melodramatic flair.  The equally old-style font - again an all-caps style - gives "Edwin Drood" some prominence, but not as much as the more interesting "mystery."  Still, the bright red color of the letteringand the thin accent line inside each, along with their simple lines makes the name draw your eye.  Perhaps the best thing about the title is how smoothly it is integrated into the whole logo. 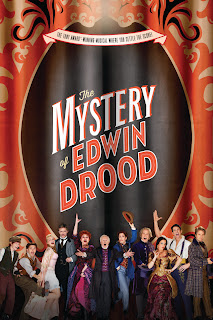 The background in primarilry red-orange, with its beige and brown decoration frames the dramatic oval where the titile sits prominently.  I can't remember a logo that used dark brown so perfectly.  The ripple effect of the print solidifies the image as a theatrical curtain, which, given the show-within-the-show nature of the musical is also a wise choice.  The title and background alone tell us in a quick glance that we are in for theatrical, meodramatic fun.  The banner across the top finishes off the job, information-wise: "The Tony Award-Winning Musical" - it's a musical!  "Where You Settle up the Score": a clever play on a song in the show, that hints that the audience will be involved.  (In other versions of the logo than the one above, the names of the shows stars are between that banner and the title.  Theatrical names all, this show is really for true theatre lovers.)

By adding the very intersting line up of main characters at the bottom, we learm a lot.  Theatre fans will want to check out their favorites.  The line up also suggests the line up of supects in act two, and the way they are posed is clearly theatrical and fun.  It also shows the exciting, exotic costumes, and the period/genre - Victorian Music Hall comes through very clearly.  But what also comes through is the bawdy fun of actors vying for your attention (just look at the clowning around of that poor guy and the undergarments of the blonde ingenue (Durdles and Rosa Bud)).  And they pose several interesting questions... why is there a woman dressed like a man?  Who is that exotic creature in gold?  Why is Chita Rivera so excited?

One of the nicest things about this logo is that it will mean even more once you've seen the show.  I hope the cast picture is on the show poster.  I want the full memory.

OK, so the title is still problematic... let's hope they don't go back to Drood!