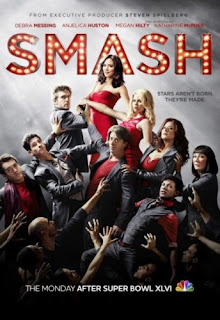 While the film version of Les Miserables, and now, Rebecca, continue to make headlines in the new year, so too will the top story.  It is a little TV show called Smash that is really probably the most important theatre story of the year.  OK, it isn't breaking any kind of ratings records.  In fact, after a HUGE debut, ratings dwindled.  And then they got better.  And then the network, NBC, ordered a second season.  Considering respectable, but not great, ratings, and better than great (as in enormous) budgetary considerations, the network still renewed it.  Apparently, the prestige of the series, and the steady - and slowly growing - core audience is enough.

Yes, theatre fans, to America at large, our beloved Broadway (and live theatre for that matter) is widely thought of as prestigious.  The biggest national tour conglomerate has "Broadway" in its name, and each city in its network has "Broadway" in its series title, too.  Live theatre continues to have a stellar reputation - a treat that even the middle class can save for for an extra special night out.  Having a Wicked t-shirt is a status symbol in Peoria, and saying you've seen The Lion King anywhere ups your cultural quotient.  And so it makes sense that a TV series about how it is all done would had to the struggling network's "cultural quotient."


The show attracts Oscar, Emmy and, of course, Tony winners.  Faces the nation knows (Angelica Huston,  Katharine McPhee, Debra Messing) easily mix with the top in Broadway talent (Christian Borle, Megan Hilty).  And the guest stars are a heady mix, too - Uma Thurman, Nick Jonas and Bernadette Peters!!??  And the supporting cast was a who's who for us (we?) theatre fans - Will Chase, Brian d'Arcy James, Ann Harada, Savanah Wise, Wesley Taylor and all the best gypsies - Curtis Holbrook, et al.  Broadway actors are finding juicy TV work and can still do a Broadway show since the show films in New York City.

This coming season looks, casting wise, to be more of the same - Bernadette is back! - and the cast has added Oscar winner Jennifer Hudson and Emmy winner/Tony nominee Sean Hayes, and Broadway darling Jeremy Jordan.  And theatre fans will love seeing Krysta Rodriguez and Andy Mientus in plum roles, too.

Thanks to talent shows like American Idol and The Voice and scripted shows like Glee and "musical episodes" being done on every network, the country is finally ready to embrace its inner theatre geek.. People can burst into song and dance and no one bats an eye, be it a cover of  "Rumour has It," or a new show tune, Marc Shaiman and Scott Wittman's "Let Me Be Your Star" to begin with.

OK, so the drama moves too fast for a the creation of a real Broadway show, things are too convenient, and the subplots sometimes drag down the rest of the show.  I'm sure we'd all love more backstage drama and production numbers.  BUT, and it is a big one, Broadway is now mainstream much like it used to be in the days of Ed Sullivan and West Side Story.  And it is mainstream in so many other ways - it is all over social media, the soundtrack (not cast recording!) is a HUGE seller, and cast changes make headlines.  The country, it seems, is ready, willing and able to enjoy the drama of creating a show from scratch and all the human drama that goes with it.  Those of us who follow theatre like sports fans follow their stats recognize it isn't realistic.  But it sure is fun seeing the theatre district as a character, enjoying the "in" jokes about Michael Reidel, and strutting our knowledge in front of previously uninterested friends.

Anything that puts live theatre in the forefront of the nation's collective consciousness - even people who don't watch it know what Smash is about - is good for the art form we love.  And that's why Smash is the top theatre story of 2012.