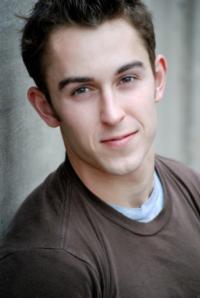 A couple weeks ago, I posted my latest "Face of the Future," and it must have really struck a nerve with a lot of you.  So many of you hit this blog that day that I had to re-set it.  TWICE!  Well, that guy was Cody Williams and now he's agreed to do an interview series for this blog!

It seems especially appropriate that we start this series on the day before the first preview of his new show, Rodgers + Hammerstein's Cinderella.  Today, he reminisces about his Broadway debut in Memphis, his high school and college training, the luxury of originating a role, and how he had to make a big choice after a pair of auditions.   Here is the first in a series... 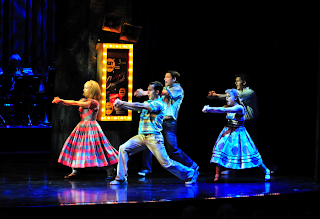 ONE
JEFF: Cody, thanks so much for sharing the momentous journey of opening a new Broadway show with us!  But this isn't your Broadway debut.  That came when you joined the cast of Memphis, right?  How was that first taste of "the Big Time"?  Was it everything you dreamed your debut would be?  What is it like joining a show already in motion?

CODY: My pleasure!  It was definitely everything I had dreamed it to be, and at the same time it was completely different than I had imagined! The excitement of being on Broadway for the first time was absolutely present and even more special than I had imagined it would be.  What I didn't realize, however, was how difficult it is to be a replacement in a show.  Replacements are essentially given a few hours of rehearsal to learn a part that someone had months to create.  I was the tumble track in the show, and I had never done those tricks with the lights, band, or set, when I first had to do them for an audience.  It certainly made things exciting!  For me, an actor’s first show on Broadway is the equivalent to a baseball player’s first chance at bat in the majors.  It doesn't matter if you one day become the next Babe Ruth - you don't want to whiff your first at bat!  (On a side note, something that made my debut extra special was that I was taking over the track created by Cary Tedder.  Cary was my best friend in high school.  He is the reason I learned how to tumble.  It was so special to take over his track.) 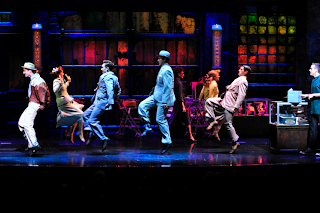 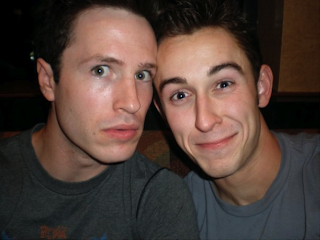 TWO
JEFF: In contrast, you are a part of the original Broadway company of Rodgers + Hammerstein's Cinderella.  I imagine that this experience is completely different!  From design to staging, you are starting it all.  Just how different is it?  What have been some of the great surprises?  And the unexpected challenges?

CODY: Creating a track in a show has been completely different than taking over a track!  Honestly, it has been much easier.  There has been much less stress because the creative team built my role around my strengths.  I also have had much more time to prepare!  I’ve been working on R + H's Cinderella since the beginning on July, and we don't open until March 3rd.  One of the biggest perks of originating this role has been getting to develop relationships with the creative team.  Watching these amazing artists work while becoming their friend has been an incredible gift.

THREE
JEFF: Congratulations on your really awesome blog series for Broadway World.com!  Your enthusiasm is infectious!  Judging from some of the rehearsal pictures you've shared there, animals play a part in this show.  What do you have to do with that aspect of the show?  How does an actor prepare for such a task?

CODY: Thanks so much!  I have to be careful not to give away any surprises, but nature in general plays a big role in Rodgers + Hammerstein's Cinderella.  I play the raccoon that drives Cinderella to the ball.  To prepare for this, I watched a lot of videos of raccoons to see how they move. Also, I've never driven a horse-drawn carriage, so I went to Central Park and watched the carriage drivers. 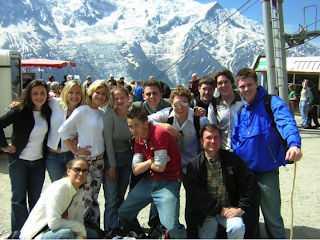 Pebblebrook visits Mount Blanc, Switzerland.
Recognize Colt Prattes (center) from Pink’s “Try” music video?
He was a senior buddy to me in both high school and college. 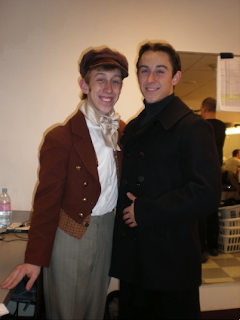 Pebblebrook and CCM peer
Ryan Breslin (Newsies) and myself.

FOUR
JEFF: Speaking of preparation, tell us about your high school and college experience at the University of Cincinnati College-Conservatory of Music.  I read in an interview that you did that they try to create "triple threats."  How has that helped your developing career?  And specifically, how has that helped (or hindered) working on a show where you are creating the role?  Of the three aspects of "triple threat-dom," which is your favorite and why?

CODY: I never performed at all until high school.  By a tremendous stroke of luck, I was talked into going to an amazing performing arts high school in Atlanta.  Pebblebrook High School is absolutely the reason I have the life I do today.  While in high school, I focused most on dance and acting.  To be honest, I couldn't sing at all.  That's why I wanted to go to Cincinnati (CCM).  Pebblebrook took me to all of the big musical theater schools to see shows and take master classes.  After seeing students from every school perform, I knew that I needed to go to Cincinnati.  It was clear that if I could train with CCM’s voice faculty I could become the singer I hoped to be.  CCM's mission is to train triple threats, and I feel they succeeded with me.  Being solid in all areas is the reason I have had luck getting work.  When I was at Pebblebrook, we used to visit New York to see shows.  I dreamed of being able to act and sing like the cast of The Light in the Piazza and dance like the dancers in Movin' Out.  Everyday, I am so happy to be at work because it is an affirmation that my dream has come true.  I get to perform WITH those amazing people! 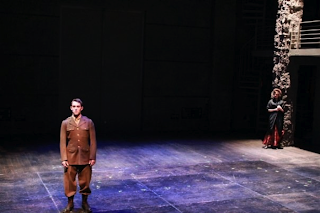 Playing the Soldier in CCM’s
Hello Again opposite Mia Gentile

FIVE
JEFF: Describe for us the audition process for Cinderella, from the call/notice to your reaction upon finding out you got a part in the show.  And what does your track in the show entail?

CODY: This past May, my agent called me with an audition for the workshop of R + H's Cinderella.  I went in to dance and sing initially, and I felt my audition had gone very well.  There were a couple of callbacks where I was asked to perform sides for [the roles of] Prince Topher and Jean-Michel.  I also was asked to come to a callback to partner dance.  The day I found out that I had gotten R + H's Cinderella was a really special one for me.  I had auditioned for Drood that morning.  That afternoon I found out I had gotten R + H's Cinderella, and a few hours later I found out I had been cast in Drood as well.  I was on cloud nine!  Unfortunately, once the dates for both shows were finalized, it became clear that I couldn't do both shows.  In R + H’s Cinderella, I am in the ensemble and have a great feature as the raccoon.  I also understudy Prince Topher and Jean-Michel.