I was starting to think that Mary Poppins would never close.  I mean, it has been around for 6 years, surviving a lack of Tony Awards, a shocking lack of buzz, and weeks at a time of less than 50% capacity.  But the things you can take a family of a range of ages, particularly little girls, on Broadway, are pretty limited (until lately).  And word-of-mouth must have been great, because it is one show you hardly ever hear about, save for a few casting announcements (Did Gavin Lee ever really leave the role of Bert?).

Now is probably the best time to close the aging show - while it is still in good shape, and not a joke.  And, oddly enough, the little-girls-on-Broadway-show market is about to become saturated.  We still have Annie, and a little show called Matilda looks to be a huge hit for the post-Harry Potter reading set.

Why it didn't have great buzz is beyond me.  When I think back to seeing one of the last previews of the show, I remember two particularly thrilling things that are still among the most exciting things I've seen in decades of live theatre attendance.  In what is now seen as precursor to the flying action of Spider-Man: Turn Off the Dark, watching Bert walk up the wall, dance upside down at the top of the proscenium, and then walk down the other side made the little hairs on my neck stand up straight - right now they are are tickling my collar once again.  And the other big thing was watching the enormous Banks mansion rise up from the floor and unfold its layers.  It looked pretty much like a real house - a whole house - on the stage.  And then the roof came off... and then the kitchen... I practically cried like a baby at the sheer wonder of it.


It probably surprises you that I don't talk about Mary's exit over the audience.  Well, I never saw it.  That's right.  Mary Poppins didn't fly away that day.  I guessed it wasn't going to happen when you could see the wires slack and the cast look up into the rafters and part slightly. But my fears were confirmed when stage hands appeared and pulled Ashley Brown down by her feet.  You never see stage hands at a Disney show, Heaven forbid.  So it had to be an emergency.  Looking back on it, I'm glad they didn't chance it.  Remember the press when a stunt man fell to his near-death across the street.  Imagine the media frenzy if the "actual" Mary Poppins plummeted to her death on top of children and in front of hundreds more?

But it speaks volumes for the show that I was hardly disappointed at no seeing her fly.  I loved the show.  Loved it.  And besides, I'd go back and see it again, and she was sure to fly.

Sadly, I never made it back to the show.  And I won't get there before March 3rd, either.  I guess I figured nothing would kill the old gal.  Even more sadly, I won't be able to take my niece to see it as her first Broadway show.  I have been able to picture her beautiful brown eyes grow as each visual delight came to life before her eyes since she was born 3 months to the day after Poppins opened.  What will be her first Broadway show? 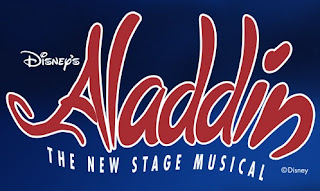 I know it probably won't be the next show to take the New Amsterdam stage, Aladdin.  She is absolutely terrified of Jafar.  I, for one, can't wait.  After Mary and Spidey, I bet that magic carpet will be SPECTACULAR!