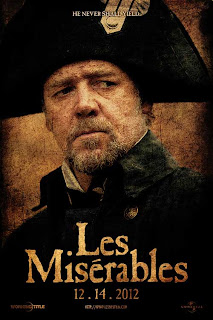 The film version of the blockbuster stage musical Les Miserables was first announced some 25 years ago.  I'm sad to report that even one day more wouldn't be enough to save this dull, heavy-handed weeper wannabe.

Let me start off by saying that the failures of this film do not include director Tom Hooper's much written about live singing.  They had the desired effect: intense, more organic performances.  Unfortunately, it is a variety of other directorial choices that undermine this should-be-but-isn't epic musical.

1.  The use of extreme close-ups is so excessive, that it has the opposite effect of its intent.  Extreme close-ups do, in fact, up the "intensity factor."  Particularly helpful during key moments of the score's many soul searching arias, Hooper captures them all.  But then he keeps at it, relentlessly cutting to different angles of the same face for entire songs and their surrounding scenes.  I'd venture to say as much as 80-85% of the nearly 3 hour film is done in this fashion.  The overkill of it is more distracting than it is intense and personal.  And in this age of hi-def screenings, it makes the giant faces on the screen all the more under scrutiny. Every bump and scar is larger than life, and it is distracting.  Note to Mr. Jackman, Mr. Crowe and Ms. Bonham-Carter - you all have moles that need a doctor's attention. 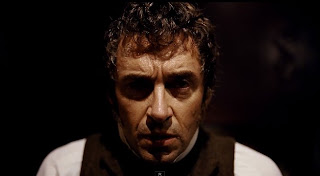 2.  The near constant cutting from angle to angle does not add to the tension; it distracts from it.  There are more quick cuts from angle to angle, from subject to background and back again, that the film is a jumpy mess.  Great for an action thriller (and admittedly for some of the more "action-y" scenes here) such rapid fire cutting in a serious drama doesn't allow emotions to build as much as they could, mostly because your brain is working so hard trying to keep up with what it is seeing.

3.  Another by product of the extreme close-ups and jerky cutting of camera angles is the third most distracting thing about watching this film: half of the subject of any given frame ends up off screen.  How many times do we have to see the right side of Hugh Jackman's mug?  Or the top half of Helena Bonham-Carter's face?  Of course, it wouldn't be so bad if the rest of the jumbo screen were full of something worth looking at.  Usually, it is a blurry wash of the filth and decomposing buildings that all of France seems fully stocked with. (We get it already! Everything about this film is "miserables"...ugh.  Yawn.)  Usually.  Which leads me to... 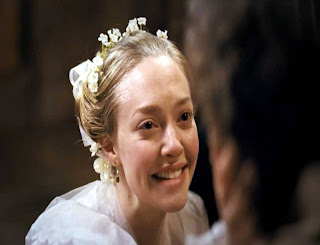 4.  Heavy-handed screen imagery/symbolism is so blatant it is literally laughable.  A distraught Valjean runs through a broken down church toward a broken down altar to confess to/yell at God in a moment of religious confusion.  What do we see on a table next to him?  A huge, broken crucifix!  And another moment of emotional crisis, Valjean drops to his knees on the street by the barricade, while a giant eye from a sign stares down at him.  SYMBOL! (And awkwardly inappropriate homage to The Great Gatsby, all the more obvious since a trailer for that upcoming film includes a shot of the same thing...)  And when the young revolutionaries are gathering stuff to build the barricade, great pains (aka wide, normal camera shots for a change) are taken to show us that the neighborhood is throwing all of its possessions in the street.  So forgive me for laughing when, after it is assembled, two coffins are front and center on said barricade.  Really?  Even back in the day when people died from the common cold, households weren't stocked with coffins.  Insert eye-roll here.  I could go on, but you get the point.  I hope.

5.  Laughable (also literally) special effects undermine the real emotion of a few scenes.  Did they really cut the tail off of a live cat for a cheap laugh?  Yep.  Did they really resort to horror film tactics to make us jump when Valjean springs to life literally covered in shit in the sewers?  Yep.  Did they really show that Javert was a man on the edge by showing him constantly waking on the edge of high places, honing in on his shiny, never dirty shoes? Yep.  And worst of all, did they really show Javert hit a dam with a literal splat sound effect as he plunged to his death?  Yep.  And instead of being moved, we laughed.  Yes, laughed.  A cheap one at that.

There is one major draw back to the live singing thing, though, which also undermines the intensity and emotion of the film.  Say what you want about the score, no one can say it doesn't soar when it needs to, and that its quiet moments are all the more amazing because of the way it modulates.  Unfortunately, because more care has to be taken to hear those "live" voices, the terrific orchestra which has been brought in here has largely been reduced to background music.  The result is a lackluster showing for all of the show's sweeping anthems.  I went in fully expecting to want to applaud at the end of "One Day More," much as we did at the end of "The Cell Block Tango" in Chicago's film treatment.  No such luck.  Ditto "Do You Hear the People Sing?" and the final death scene. 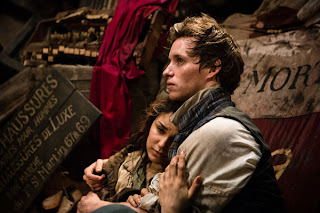 What must have played as very intense while filming does not come across as much on film.  Granted, Valjean, while an emotional mess, and Javert, a rigid, unbending man of obsessive righteousness, are, in the stage version well-sung but one note characters.  Pretty much the same with too-sweet-for-their-own-good Marius and Cosette.  On film, as on stage, they come across as just that - one note emotional button pushers.  Hugh Jackman does everything right, but not not enough of any thing to make it any more interesting.  Russell Crowe looks intense - more a concentrating-while-going-number-two intensity than a rigidity of righteousness; apparently both are the same look.  (I won't touch his singing beyond saying it is in character if not pleasant.) Eddie Redmayne is pretty and not much more - his "Empty Chairs" was one of the film's biggest disappointments.  And poor Amanda Seyfried has had her role cut to the point where Cosette is barely a supporting character. 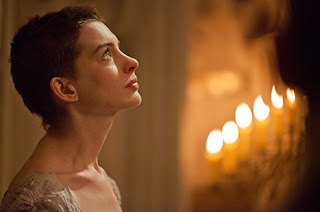 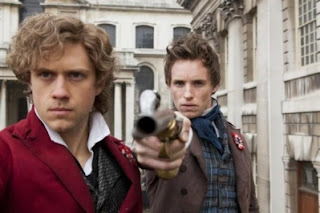 It isn't so surprising that the the two most interesting characters in both versions are the ones that are again getting the most attention, and it is even less surprising that a stage actor nearly steals the film with a role that seems to have expanded exponentially.  Fantine has long been a character that critics and audiences attach to quickly - and Anne Hathaway does not disappoint, even as her big number "I Dreamed a Dream" is blisteringly intense no placed AFTER everything has happened to the girl.  No wonder she chokes back sobs when she sings about hope.  Fantine has none left.  And I'll say it now: the only reason I didn't give this film an "F" is because of her performance.  She deserves the Oscar period.  The other female role that is so amazing in both versions, Eponine, is warmly played by Samantha Barks.  But she is a victim of the poor balance between singer and orchestra - "On My Own" is nice here, but not the gut-wrenching aria it is on stage.  I left thinking, "She was better in the anniversary concert."  This role also earned its original portrayer, Frances Ruffelle, a Tony.  Both characters seem built for awards; they are the best written and most interesting.  Another Tony was won by Michael Maguire for playing student leader Enjolras, and bless him, Aaron Tveit makes his small role seem enormous.  The camera loves him.  A lot.  Though the film does nothing to clarify the relationship between Marius and Enjolras, Tveit makes great strides in making us believe he has the charisma to shut down an entire city. 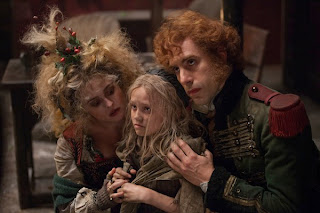 Three crowd favorites on stage are always the Thenardiers and Gavroche.  If the audience I was with is any indication, the film will only solidify that.  But for not the same reasons.  In both, the Thenardiers are comic relief for sure.  But in the stage version, they are also evil bad guys.  In the film, Helena Bonham-Carter and Sacha Baron Cohen are clowns - one note clowns - which is something sorely needed to relieve the tediousness of the rest of the film.  And they are good at it.  (I fear, though, that all future productions will add the little running gag of not knowing Cosette's name and, God forbid, cutting up a cat and a fornicating Santa.  A good as they are at the funny stuff, the film version undermines the evils of these two - does Cohen really need to completely change his look in every different scene?  I am certain that there are people who don't realize he is in more than two scenes.  And little Gavroche, never a favorite of mine, as played by the cloying and infuriating Daniel Huttleston, made me want to gouge out my eyes, not empathize with the brat.

Les Miserables has never been one of my favorites on stage.  It is an exercise in excessive emotion and shameless manipulation.  The score is really the same 4 or 5 songs recycled in different keys and tempos.  And the kids make me cringe.  But given the epic nature of the story and the stellar cast, I had high hopes.  The opportunity to use the medium of film to cash in on the enormity of the story seems so obvious.  Unfortunately, that opportunity was completely blown by over direction and heavy-handed symbolism.