Kudos to Broadway Records for starting the 54 Below recording series, capturing various cabaret acts by Broadway stars.  I hope the series proves successful, since most of us don't live in New York City with easy access to such events.

First up is, two-time Tony-Winner, Norbert Leo Butz, with an act he calls Memory and Mayhem.  Given the song list - a curious mix of classics and contemporary, blues and jazz, rock and country - and the banter, the title seems fitting enough.  The execution, however, is somewhat short on mayhem and is only occasionally memorable. 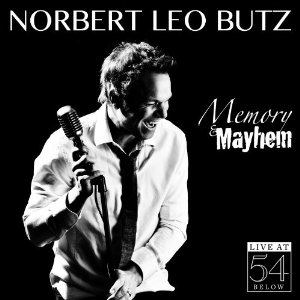 I suppose I should preface my negatives by reiterating something I said in my review of the Laura Osnes concert CD: of all the things there are about Broadway, I generally dislike the "Broadway-actor-solo-CD."  I find them forced and phony feeling.  That was not the case with the Osnes CD, and it is only partially true in this case.

Especially at the start of the CD, Mr. Butz' patter feels very forced; even his voice goes up as he tries to be funny and "casual."  He's only a tinge funny - even the audience's "woo hoo's" and laughing applause wanes as he goes on.  And the first couple of numbers feel equally forced.  Don't get me wrong, the man has vocal skills that work remarkably well across genres.  But in what feels like an exhausting over-attempt to distance himself from his Broadway vocal stylings, the first few numbers (especially "Home" and "The Way Young Lovers Do") feature what sounds like a strained Butz riffing on end notes in an odd combination of jazz scatting, yodeling, and Idol style histrionics.

Mr. Butz is wise enough to include a bone for his avid Broadway fans, which surely made up the majority of his audience that night.  That tease is a mash-up between "Sixteen Tons" and his Tony-winning turn as Freddy singing "Great Big Stuff." But, as the kids say these days, it is an "epic fail."  What starts out as clever, ends up being a tedious and way too long "Great Big Stuff" sung to the tune of "Sixteen Tons."  It is clever for the first verse and goes down from there.  His oh-so-brief guest star, Lauren Kennedy does her job and nothing more in their duet, "I Could Be In Love With Someone Like You," a song cut from fan favorite The Last 5 Years.  Another nod to his theatre fans, another disappointment.

OK, I get it.  Norbert is using this opportunity to get back to his vocal roots.  I applaud that attempt, really.  In fact, maybe the whole thing would have been better without any reference to his stage career. 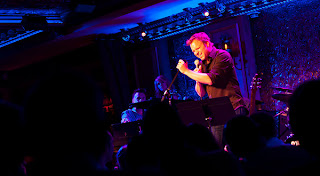 Norbert Leo Butz is one of my favorite Broadway actors; I'd go so far as to say he's on a very short list of my top favorites.  That said, even I recognize that watching him perform is much easier on the senses - the visual and aural together even each other out - than just listening to him.  (Try listening to the audio of his Tony telecast number from Catch Me If You Can without watching it.  YIKES!) So perhaps much of my objection to parts of this live recording has more to do with not being able to see him work each number than anything else.

Yet, there are whole sections where he sounds at ease.  His vocals flow, strain-free; his patter is affectingly sincere.  When he talks about his new daughter and launches into "Georgia On My Mind," I think we are hearing the "real" NLB, the man connected to his life and his life connected to his music.  And it is wonderful to hear.  Another part of the show has him talking about the ups and downs in his life recently (he doesn't elaborate, but if you follow his career/life at all, you know what they are) and there is a catch in his voice, understandably.  And then he sings with even more emotion.

Truly, the "memory" part of the CD comes across exceptionally well.  His liner notes are equally emotional in spots.  It's when he tries on the "mayhem"... the "smart ass New Yorker" that the act falls apart.  Mr. Butz is at his best connecting with a cabaret audience when he is being himself.  He should leave the actor on the stage where he belongs.