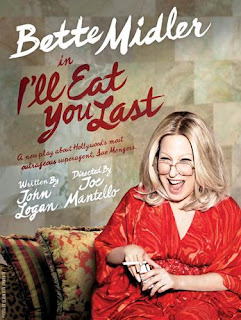 THE CONTEST HAS ENDED!  THANKS TO ALL OF YOU WHO ENTERED!

Legendary performer Bette Midler is back on Broadway!  And JK's TheatreScene is celebrating the return of the Divine Miss M with a ticket giveaway!  That's right, FREE tickets to see Bette Midler!  BUT (there's always a "but" with good news isn't there?) YOU HAVE TO ACT FAST!  The tickets are good for a VERY limited time.  So the contest will be over before you know it - entries must be received no later than NOON on Tuesday, April 9th!

For more than 20 years, Sue Mengers's clients were the talk of the town, and her dinner parties were the envy of Hollywood. Now, you're invited into her glamorous Beverly Hills home for an evening of dish, dirty secrets and all the inside showbiz details only Sue can tell you.
Appearing on Broadway for the first time in 30 years, Tony® and Grammy® Award-winning superstar Bette Midler plays the legendary Hollywood agent Sue Mengers (1932-2011) in this new, one-character play written by Tony Award® winner and three-time Academy Award® nominee John Logan and directed by two-time Tony Award® winner Joe Mantello.

1.  Bette Midler famously made her Broadway debut in which classic musical?
A.  Hello, Dolly!
B.  Gypsy
C.  She Loves Me
D.  Fiddler on the Roof