With Constantine Maroulis in the title roles of Jekyll and Hyde you really do get a "twofer" your money.  I wish I could say it is two exciting performances as Dr. Jekyll and Mr. Hyde.  I wish I could say he is scary and sexy, evil and good, provocative and riveting.  But I have to be honest the "twofer" is boring and boorish. The "actor" in him is variations on one note sad-sad and sad-grumpy pants; the "singer" in him relies on American Idol parlor tricks at the expense of character.  And while I bring up that whole Idol thing, let me just call him out on something that drives me nuts when people who have no business on Broadway make it without earning it.  Constantine, you don't get to do that whole "slump-shouldered-crooked-bent-head-shuffle-to-the-front-I'm-so-humbled-by-all-the-applause-aw-shucks" shtick.  No one believes it, especially from someone whose fame came from the applause and phone calls of the very same audience.  Bad form. AND, as Randy Jackson would likely say, "Dawg.  You were pitchy.  Many times."  And maybe Simon might have said, "Style over substance.  I'm not feeling it."  You see, for all of the "vocal pyrotechnics" of every last number, it is all at the expense of character or emotion of the moment.  In fact, "This Is the Moment," one of the show's most famous songs, sounded pretty much the same as every other moment in the show: loud, overblown and absent of genuine feeling. 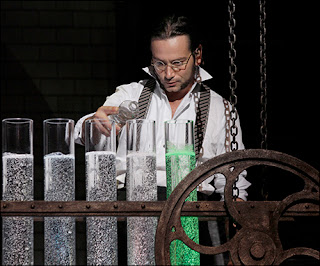 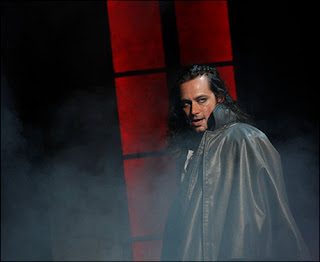 Not that Maroulis is alone in this.  Deborah Cox, a far superior vocalist to her leading man, still managed to make every number of hers sound like all the others.  But at least I can say she appears to be trying.  That said, she's either too vulnerable or too tough, but never a mixture of the two, or even a variation of emotional level.  Of course, she is fighting an uphill battle.  Everything is working against her.  She's either fighting off the dirty hair and monotone growl of Maroulis as Hyde (not to mention an uncomfortable set of sequences involving light bondage), or the icky gross advances of her boss, Spyder (David Benoit).  A singer more than actress, she should have been given more direction, too.  She meanders around the stage with an air of not being sure where, from scene-to-scene, she's supposed to be, and no one told her what to do with her arms, either.  I have no doubt she could have been a kick-ass Lucy, but no one, it seems, has tried to help her. 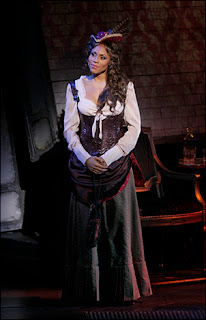 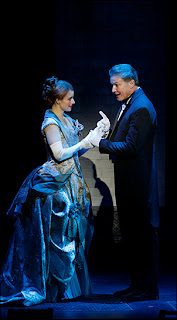 And did they cut a lot of Emma's role in this version?  I seem to recall a lot more of Jekyll's fiance in the original than we got here.  Of course, to be completely honest, Teal Wicks, as Emma, might have been on more than I realized.  In what I think was her first scene - the engagement party - I didn't realize she was Emma until she finally spoke to her betrothed.  Until then, she clung to what turned out to be her father, with a posture and deepened voice that came across more like a dowager from Downton Abbey than as a young socialite in love.  She can sing, but I've heard several others sing better and with more passion.  Again, this may be a function of the direction she has been given.  It is clear, even from the show's advertising, that this third member of a love triangle isn't all that important to the way this story will be told.  Instead of giving equal weight to the Jekyll/Emma pairing and the Hyde/Lucy pairing, Emma is footnote.  This is sad because the parallels between the opposite nature of the two women really could heighten the duality of the two men these women deal with.

A brief note or two about the "villains."  Even considering the inexcusable lack of plot and character development in Leslie Bricusse's laughable book, I felt absolutely nothing for these people, which is crucial for any villain, but even more so here, where their deaths are germane to a good portion of the plot.  They aren't even developed enough to call stereotypes, or interesting enough to look forward to their getting their due.  One of them, though, did do one thing for me.  Blair Ross does give the single worst performance of the entire 2012 - 2013 season.  Bar none - including the entire casts of Scandalous and Motown.  Side note - the bad guy in the fez suffered no more than a broken knee at the hands of Hyde.  In fact, he manages to crawl off the scene on his own.  And yet he turns up dead, anyway.  Really? 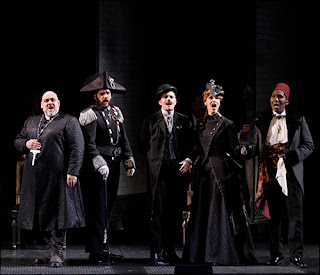 It is hard to imagine that the same guy who put together the jubilant Newsies and the comparatively complex and infinitely more emotional Bonnie and Clyde was responsible for this.  I generally enjoy and definitely respect the work of Jeff Calhoun, but it would seem he didn't do much with this production.  Well, much that makes sense, anyway.  OK, what was with the hospital cronies in their underwear being dressed by their servants. I literally laughed out loud (not that anyone heard me - only my companion Mike was within 10 feet of me in any direction) as this was going on.  I also laughed heartily at the sound effects.  Who knew the being impaled and gutted by a crucifix sounded so squishy?  Then, too, are the oddly distancing moments in Hyde's lab, where a lot of the story and conflict happens.  But it gets lost on the huge Marquis stage, especially with a lack of scenery.  With so little happening, in such a huge space, any intensity gets washed out, and none of it all that interesting.  I am loathe to admit this, but I had to fight to stay awake.  For a horror thriller musical, it was so dull.

The stars and the director aren't helped much by the design team, either.  Crooked LED panels, looking like they might fall over at any second created more potential tension than the scenes they were supporting.  What was set designer Tobin Ost thinking with that odd set for Spyder's nightclub?  I get that the strings were supposed to be spiderweb-like (rim shot here).  But ugly to look at and with no pay off.  And Ost's costumes are uniformly Victorian enough, but also monochromatic for the most part.  In other words, it is boring to look at.  Even Emma's wedding gown was underwhelming.  And what else can I say but that the hookers in this show are the best dressed in Broadway history.  For someone who can barely afford to eat, Lucy dresses like the Queen.  Much has been talked about in regards to Daniel Brodie's projections, particularly when Hyde and Jekyll confront each other.  Well, it actually works.  Well, almost.  Whoever thought it was a good idea to have Hyde disappear in a filmed "Charlie's Angels"-like explosion clearly wasn't thinking it out.  Why didn't the walls explode or even smoulder a little?  Jeff Croiter's lighting may be more notable for its lack of light than actual illumination.  Finally, Ken Travis' overamplification made the show easy to hear, but at the expense of being able to tell who was talking or singing at any given moment.  Were this a rock concert, I'd say "bravo," but it isn't. 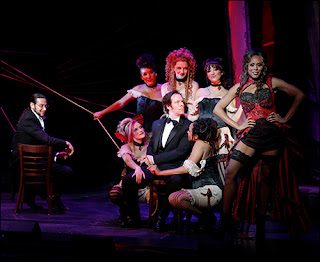 Perhaps, much like the recent concept album with the same stars (review HERE), this would have been better as a concert.  And I am all for updating scores - Drood, Pippin and Cinderella have all benefited from just that.  But isn't it telling that a show that closed in 2000 needed to be "brought into the 21st century?"  But they did some updating - now all of the power ballads have been equally amped up so that what once sounded similar is now completely indistinguishable.  And the three numbers that aren't ballads have been reworked to the point that they are unrecognizable.  "Murder, Murder" is now a solemn hymn-like thing.  "Bring On the Men" is so slow in tempo that only senior citizens might become aroused by it.  And the most rousing number, "Facade," is now an odd waltz.  The lyrics, like the tempo, are now sung in groups of three, and so shoehorned into this waltz mode that the meaning of the words is lost completely.  Even some of the ballads have been heinously reworked.  When Jekyll sings his big "I need" number ("I Need to Know" appropriately enough), I had to ask my companion, Mike, if the orchestra was playing the same song Constantine was singing.  I kid you not.

Not only is this revival one of the worst shows of the season, this is also one of the most unnecessary productions ever staged.  For something that looks so slick, the whole thing smacks of not being ready for public consumption.  You'd never know that this was the last stop in a long national tour.  And, Jekkies, spare me your hate emails.  If it were any good, you'd all be there, selling the show out.  And you are staying away in droves.  So maybe I'll get letters of support instead?