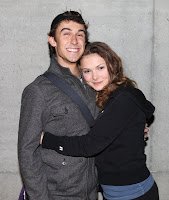 These days, Cody Williams is in an established hit musical, Rodgers + Hammerstein's Cinderella.  We've been following him since the show started previews, and he's been gracious enough to give JK's TheatreScene a series of brief interviews chronicling his journey with the show.  (To read his interviews from the beginning, click HERE.  Part 2 HERE. And Part 3 HERE.)  Today, it is my pleasure to bring you the fourth, and final, interview in the series.   Cody shares the view from his home away from home, the secrets behind that amazing chase scene, and much more.  Plus, he answers some of your questions!  Thank you for everything, Cody!

ONE
JEFF: Now that you've settled in for what looks to be a long run at the Broadway Theatre, what is life like in your dressing room?  Who do you share with?  How cramped is it?  What do you guys do to make it more like "home"?  What are your pre-show rituals?

CODY: My dressing room situation is pretty fantastic.  All of the ensemble guys share one large room, but our costumes never go up to it.  Compared to my last show, we have three times the space!  There is no point in the show that I have time to go upstairs, though.  I make all of my changes in the quick change booth below the stage.  Even my intermission is packed full with putting on the Raccoon unitard and wig. Pre-show rituals for me include taking a power nap before almost every show, and at half-hour, I go down to wing 3 (stage left) and warm up.  It’s so nice to do my ballet barre while listening to the sounds of the forest.


TWO
JEFF: One of the things I found interesting about this version of Cinderella is that it isn't so "girl-y."  The family who sat in front of me had a little boy and a little girl in it, and both were equally enthralled throughout.  What do you think it is about this production that makes it seem to have a broader appeal - to adults and children, boys and girls alike?

CODY: I think Douglas Carter Beane’s new book is makes this show appealing to everyone.  Of course any girl would love Cinderella, but Doug’s new story of Prince Topher, along with all of the new humor, really makes the show enjoyable for all.   One of my favorite things to happen at the show is when little kids respond to something that I assume they won’t understand.  For example: while meeting some poor peasants, Prince Topher is confronted by Lord Protector Sebastian and asks, “Sebastian- you said no one needed my help.  What do you call these people?”  Sebastian’s response: “From their attire, I assume artists.”  Every couple of shows a young child will just scream out with laughter at that line.  Haha!

THREE
JEFF: There are several sequences in the show that are, how do I describe it?...that are "athletic" - the opening scene, the chase sequences, etc.  What was the preparation like for those scenes?  I assume that as a dancer, you are called upon to use different techniques and muscle memory for those scenes versus the more traditional dancing in the ball scenes.  Is this the case, and can you explain it for those of us who aren't dancers?

CODY: “Bang-em up” numbers, as I like to call them, are my specialty.  I have had to do a “Bang-em up” number in every single show I have been in since I moved to New York (both as principal and ensemble).  The reason I am able to do these numbers isn’t because I trained a certain non-traditional way.  It is because I have trained my hardest with as many of the traditional dance/movement techniques (ballet, modern, jazz, gymnastics) as I possibly can.  My ballet training helps me move as quickly and efficiently as possible, my jazz and gymnastics training helps me execute tricks, and my modern training helps me transition from standing to the floor without bumps and bruises.  The key to performing these numbers every night is staying on top of the counts.  Get behind on your counts, and you will feel like Lucy in the chocolate factory.

FOUR
JEFF: You are featured, along with Andy Mills, prominently in one of the sequences.  While I know that it has been extensively rehearsed, there is a feeling of spontaneity to it, not to mention several gasp-inducing moments, how do you and Andy make it look like the first time?  And how are you prepared for any potential mishaps?

CODY: Anyone who has ever taken an acting class knows that one of the best ways to make a scene feel real is to give yourself a physical activity to do.  Usually this is something like sweeping a dirty floor or trying to organize a deck of cards.  In ‘the pursuit” Andy and I can always make it feel like the first time because we are in fact running for our lives. Haha.  It is not the fear of being arrested by the Prince’s men that makes the excitement real; it is the reality that if we don’t move as fast as we possibly can, we will cause a train wreck.  Everything happens so fast in “the pursuit” that the only way to deal with mishaps is to be on our toes and to keep going.  One of the first lessons learned in gymnastics class:  If you get scared you are going to crash a flip, so keep going.  It’s always better to land on all fours than to try and stop the flip and land on your neck.

FIVE
JEFF: What is your favorite scene/part of the show that you are in?  Now that the show is running, how has it been rehearsing for the roles of Topher and Jean-Michel?  Are you looking forward to the chance to go on and/or how scary is the prospect?

CODY: I have so much fun being onstage that it is hard for me to pick a favorite part.  I’d say my three favorite parts are being a knight at the beginning, being transformed by fairy godmother to drive Cinderella to the ball, and “the pursuit”.  I also love any moments I get to share with Phumzile Sojola.  It has been so great rehearsing for Prince Topher and Jean-Michel.  I am thrilled to get to go on. Shamelessly, I am not scared at all.  I am chomping at the bit to get a chance to sing those songs with that orchestra! 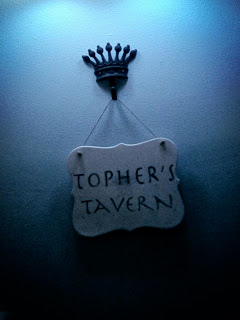 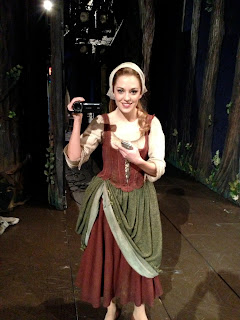 LEFT: Santino Fontana's dressing room is where the party's at on Sundays, post-show
RIGHT: Laura Osnes filming her "Princess Diaries" blog for Broadway.com

OK, Cody, before you go... here are a few questions from my readers!

1.  What is something about the cast (or certain cast members) of Cinderella that you think audiences would be surprised to know? 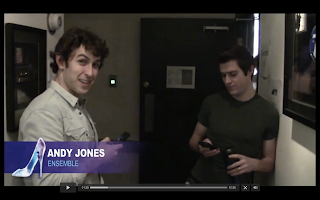 CODY: I think they would be surprised to learn my name is Andy Jones.  Thanks broadway.com! (For anyone who doesn’t know, Nick Spangler won The Amazing Race.  That’s pretty freaking cool!)

2.  If you could be in any Broadway musical past or present what would it be, and why?

CODY: Oh man that is a hard one!  There are so many I would have loved to have taken part.  I wish I could have played the role of Investor in the original cast of Wicked ;) In seriousness, I think I would pick to be part of the original cast of Oklahoma!  It is so much fun to perform, and I would have worked with Rodgers and Hammerstein as they were just starting out, doing such an inspiring, patriotic show while we were in the middle of WWII.

3.  Is it difficult to keep a Broadway work schedule and have a girlfriend?  (BTW, she's very pretty!)

CODY: It is if the girl works a 9 to 5, but fortunately I don’t have that problem.  And thanks!

4.  If TMZ brought their cameras backstage to do a [segment] on you, what would they find out?

CODY: They would learn that I eat all of the chocolate in the wig room and that I make my dresser Michael buckle over laughing at least once a show.