Review of the Saturday, March 30 matinee preview performance at the Lunt-Fontanne Theatre.  Starring Brandon Victor Dixon, Valisia LeKae, Charl Brown, Bryan Terrell Clark and Jibreel Mawry.  Book by Berry Gordy.  Music and Lyrics from "The Legendary Motown Catalog.  Based upon the book To Be Loved: The Music, The Magic, The Memories of Motown by Berry Gordy.  Script Consulants David Goldsmith and Dick Scanlon.  Choreography by Patricia Wilcox and Warren Adams.  Directed by Charles Randolph-Wright.  2 hours 50 minutes, including one intermission.

There are a few positive things I can say about Motown: The Musical which opened last night on Broadway.  First, it has some seriously good luck.  For some reason, it has an enormous advance sale (rumored to be around $16M).  Second, it seems impervious to word-of-mouth (and I don't mean just the theatre message boards).  And third, it isn't the worst musical of the season.  As luck would have it, this thinly veiled vanity project/biographical concert opened the same season as Scandalous.  And the sheer scale of it makes it appear to be a masterpiece compared to its sister musical, Baby It's You!


Also amongst its charms is a winning performance by Valisia LeKae as Diana Ross, though that is mostly due to a better than average impression of the music legend, and the fact that she's the most fully developed character in a cast of hundreds.  And young star-to-be Jibreel Mawry tears down the house as young Michael Jackson - he is charming, has an amazing voice, and reminds us of the gloved one before the fame got to him. The costumes by ESosa are sure to earn a Tony nod, if for nothing else than sheer quantity.  And that professional singers can do a fine job singing some of the greatest American music ever written - even if much of the time it isn't the whole song.  (Of course, there are more than 50 songs represented here.  To play them all in their entirety would cause an already too long show to be even longer.)  Alas, hard work and a talented ensemble isn't enough to make this a good musical, and barely a passable one at that.

Motown: The Musical did afford me one of the most interesting theatre-going experiences of my life, however.  It was a surreal experience up in the mid-mezzanine.  The entire house was extremely vocal, with cheers and screams greeting the arrival of every new "Motown artist."  But the deafening roar was very deceiving.  It seems the closer folks sat to the stage, the more zealous the reaction (is it true that people manufacture their love for a show in proportion to the price they paid to see it?).  Those of us in the thin air section felt more compelled to let the producers know how we felt about the show a little more "honestly."  When something was particularly well done, we cheered and screamed ("War," which closed the first act got a stirring reaction from us, as did anything "The Jackson 5" did.)  When things were preposterous, we said so out loud, even as the Premium Seated royalty cheered even louder.  There were times when whole bunches of us didn't applaud.  And intermission was like sitting at the Theatre Talk table with Michael Reidel.  As luck would have it, I sat between two charming ladies of my mother's age - one white, the other, African-American.  Both adopted me the minute I sat down, telling me I was surely too young to remember the early Motown years (thank you!), and wondering what I expected from the show.  What they expected, however, is what was interesting.  As the conversation eventually turned to a dialogue with me sitting in the middle, I learned that the lady to my right remembers Motown records as being the first "colored music" she was allowed to listen to, and some was the first her parents learned to enjoy.  The lady to my left remembered trading Motown 45's with her very first "white girl" friend - the first girl that spoke to her when she went to an integrated school.  I was suddenly appreciating Hairspray all the more.  In short, they were looking forward to show that depicted the racial struggles and American growing pains in the 60's, and how this cultural icon brought people that much more together.  A show that advertises "The beat of a generation.  The soul of a nation." seems to imply that they were going to get a show that will fit their desires.

Instead, they (and we) got a tension-less biography musical about Berry Gordy, with a script by Berry Gordy, based on a book written by Berry Gordy.  To call this a vanity project is the epitome of obvious understatements.  (Brandon Victor Dixon plays Gordy with little interest.  Even from the cloud club seats, it felt like he was walking through the role with the energy of a sloth.  Who can blame him?  How much fun can it be to have the lead in a Broadway show and have the least interesting role?) Given the success of his record company, clearly Gordy knew what he was doing, so one should expect a certain amount "the great American success story" angle.  But surely, there had to be some flaws in the man.  OK, he cops to struggling to find a first hit for the Supremes, and "fixes" things with the only artist on his roster who tries to grow with the times (and the closest thing this show has to an antagonist) Marvin Gaye (played as written - one note: angry - by Bryan Terrell Clark) by creating a sub-label.  And as a man, apparently his lone flaw is that he couldn't get it up the first time he bedded Diana Ross.

As far as the real conflicts of the story, they are presented and glossed over immediately - the racism of the age, paramount to the success or failure Motown is depicted in two cliched ways.  The label sponsored concert series toured the country as a segregated event until someone shot a gun into the crowd.  After a minute of remarkably calm discussion about it, the cast bursts into a desegregated song and dance frenzy, more Memphis than March on Washington.  And in act two, a Southern DJ states the obvious: that "nigger music" is a hard enough sell when they are buying from white salesmen, let alone black ones.  The lady to my left said, rather loudly, "Are you kidding?  After all of that, this is the FIRST time we are going to hear that word?  Riiiiggghtt!"  The rest of the "conflicts" center around Gordy feeling unloved, unappreciated, and sulking when money gets tight after he refuses to change with the times.  And, according to Motown: The Musical, Diana Ross and the Supremes parted ways with barely a whimper, and some passing comments about one of them not really being sick, after all.  And Smokey Robinson (Charl Brown) was an ineffectual "yes man."  And Stevie Wonder's 5 decades plus in the business are reduced to an entrance with his snarky mother, and a snippet of one of his least famous numbers in a second act montage number.

One other thing I learned is that all of the guy and girl groups were completely interchangeable - 5 guys in matching suits or 3 gals in matching cocktail dresses, both in a "V" formation doing synchronized or repeated motions.  The Temptations, The Four Tops, The Supremes, and Martha Reeves and Vandellas were all interchangeable.  I know this because ESosa's costumes and Patricia Wilcox and Warren Adams' choreography told me as much.  (That said, the sheer quantity of dancing will earn them Tony nods, I'm sure.)  But mostly, what  I came away with was Berry Gordy was a saint with self-doubt issues and the occasional flaccid penis. 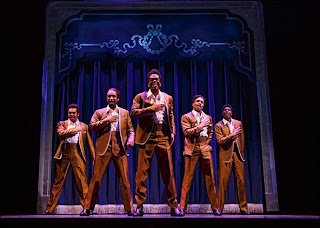 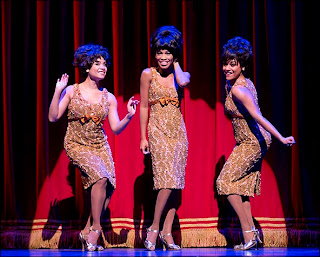 At the preview I attended, act one was nearly as long than the entire production of Passion and felt twice as long.  Clearly, despite director Charles Randolph-Wright's best efforts, people where I sat were not interested enough to wait to go to the rest room.  I stopped counting when patron 22 left before the intermission.  I bet they'd have been more willing to hold it if the show could decide what it wanted to be.  Is it a sweeping time travelling pageant?  A social commentary musical that should have been a concert?  Or is it tribute show with passable approximations of celebrities suitable for Branson, but not the more interesting if not campy impersonations suited for a Vegas revue?  His blocking would suggest that he was going for a seamless interweaving of music and drama, as each group sings down center, then dances its way upstage as the next scene comes in from the sides.  If that technique were done successfully in a consistent manner, it might be cool to look at a few times.  Instead, a combination of trying to mix it up (with one group finishing a song, bowing and walking off stage), and other groups struggling to match their dances to fit the ever moving lit scenery frames - forget being centered, they struggled to get past the scenery before being hit by it - destroy any visual flow the show has and desperately needs.  I hope in the rest of the preview period that was cleaned up, but unless they got rid of David Korins' awkward and surprisingly unattractive set, they problem could not be entirely solved.  Finally, Danie Brody's amateurish projections and Natasha Katz's uninspired lighting are a uniformly epic failure, adding nothing to the show except an occasional unwelcome visual interruption.

My two new friends looked at me when it was over, their disappointed faces saying it all:  "We lived through that time.  It wasn't ever that nice."  "They said the 'n' word once?  I can't believe they didn't go there," said the African-American lady.  "Yes!  Do you know how many times I got called a 'n-lover' over those records and my new black friends?"asked the white lady.  They agreed.  Their arguably more important story wasn't being told, and therefore the show wasn't being truthful.  One of them said goodbye with this parting shot:  "Looks like Berry Gordy's going to make another million or two."  The other closed with: "Well, I won't be recommending this to any of my friends!"


A show with an identity crisis - bio-musical?  cavalcade of song? - and a shocking lack of design coherence is bad enough to sit through.  But a story of a man who brought one of the most influential sounds and cultural phenomena to the world couldn't possibly be as boring as this makes it out to be.  Could no one in the fabled "Motown Family" find the courage to tell Mr. Gordy that his flaws and setbacks enriched the story, it didn't hurt it?  And that showing the really ugly side of America that he not only survived but thrived in, would have made him even more of the hero he already wants us to think he is?  Is there anything more American than a self-made man overcoming all the odds?  Too bad Motown: The Musical wasn't brave enough to go there, because Motown the record label is quintessentially American - "the beat of a generation, the soul of a nation."