The Last Five Years has a very passionate following, owing mostly to its original cast recording with Norbert Leo Butz and Sherie Renee Scott, and the hundreds of regional productions performed in recent years.  That there have been so many productions is no surprise - a cast of two and little or no scenery requirement make it a fiscally responsible choice for many theatre companies.  And given that each number is a solo story with ample opportunities to emote and belt, actors and anyone who dreams of acting has at least one number from the show in their audition book.  From the theatre enthusiast point-of-view, the show gets a little murky.  Despite the lack of a long-running hit on his resume, Tony-winning composer Jason Robert Brown is a popular and well-regarded member of the post-Sondheim generation.  While he has the complex Parade to his credit, his two other major titles, 13 and The Last Five Years are considerably lighter, with more obvious themes and emotions on display.  Both also rely on an obvious gimmick; the former, that the entire cast is to be 13 and under (more or less), while the latter tries to generate interest in a pretty by-the-book relationship by having just the two people involved tell the entire story AND having one start the show at the beginning of the relationship, while the other starts at the end.  They never share a scene until their time travels bring them together in the middle of their time together. 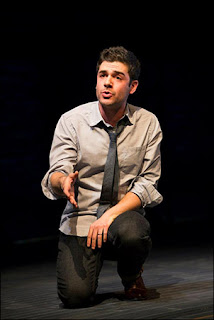 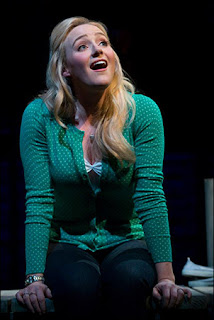 Adam Kantor as Jamie and Betsy Wolfe as Cathy

On paper, it sounds like an intriguing idea. But the problems that this plot structure causes are almost immediately apparent.  It is easy to like the guy, Jamie, from the get-go: he's happy and very excited about the direction his life is taking.  The world is his to enjoy.  Then there's Cathy, who we first meet at the lowest point in her life: she's miserable in her marriage, her husband has now left her, and for all of his success as a writer, she is a struggling actress doing summer stock in the middle of nowhere.  She's angry, bitter and very sad.  Then he goes forward, and gets a hair less likable; she goes backward and she's a bit less sad, but still angry and, well, kind of a bitch.  The problem?  Without any context, it is mighty hard to give a crap about either of them.  (Reports of hysterical fans sobbing loudly are false if the matinee I attended are any indication.)  But theatre goers that enjoy a challenge, like me, will try to put in the work required simply to even understand what happens to these people between the happy start and miserable end.  And I worked at it the whole time.  I watched and listened for aural and visual clues to link it all together.  But with my rather intense scrutiny came a fatal error.  Apparently, I missed a crucial plot point which is the real key to understanding the downfall of the newlyweds.  No spoiler alert here - I still am uncertain exactly what it is.

But I kept going despite my growing frustration at finally making enough connections to understand the basic story, and still feeling like I should feel something, anything about what I was seeing.  Frankly, what satisfaction I did get from making the connections I did make was more akin to figuring out the answer to a clever crossword clue than any kind of emotional satisfaction.  No show - especially one that is otherwise so striking in its simplicity and honesty - should take that much work for just the storyline. Perhaps a clever framing device - an opening scene from the middle of the story, where we can see the couple happy and together might make the audience care about what happens to these crazy in love kids.  Of course, ultimately, it is the cleverness - the unbending structure - that is Brown's downfall here.  At best, I'll say that Jamie and Cathy are interesting enough to keep me there; at worst, I'll say the plot device is a failure.


And so, you are probably wondering why the relatively high "B-" grade?  It is simple.  This is a grade "A" production of a "C-" theatre piece.  The direction is tight, the production values a cohesive pleasure, and the performances top notch.

I always fear that when a writer directs his/her own piece that they might be a little too close to it to take the needed steps to create a fulfilling evening of theater.  Brown doesn't solve the work's problems, but it is very clear that he has listened to critics and fans alike.  Several times, he has pointedly had his actors create memorable movements/moments, or simple set pieces that are easily recalled later when the same scene comes up.  A perfect example is the scene where author Jamie is doing a reading of his first book.  When we first see it, a bookcase with his novel prominently displayed comes down, and Cathy sits in front of it, smiling blankly and singing of her unhappiness with her life as compared to his success.  But she is there, the dutiful wife.  Later, that springs immediately to mind, when the same bookcase appears.  Only this time, Jamie is there, proudly reading, while we can visualize Cathy.  Connection made.  Too bad it takes so long to make them, and that there aren't more.  Kudos to the author for making those moments happen. Still, at the very end, when he has his actors - one in the present, the other in the 5 years ago - look at each other - one blissfully happy, the other devastated that it is over - I know I'm supposed to be in tears.  Instead, I'm relieved that it is over so my brain can rest.

Derek McLean's smooth set pieces quickly tell us where we are, and the windows that serve as a barrier between the upstage band and the action below.  Jeff Croiter's lighting design is straight forward and entirely appropriate if not entirely inspired.  The same can be said for Emily Rebholz's costumes.  Only Jeff Suggs' projections are ever at odds with what is going on in front of them.  During a particularly annoying song sung by Cathy while in a car, I found myself fixated on the driving scenes going on behind her.  I can tell you that at one point, the "car" goes through a tunnel.  After it gets through, I started counting how many other cars pass.  Again, no spoiler alert here...LOL. Good projections add to a scene, they don't distract from them.

It is the cast, however, that makes any success this show has happen.  And you can't get much better these days than the talents of Adam Kantor and Betsy Wolfe.  And lack of connection I felt with their characters isn't their fault, really.  If you look at each scene as a separate little play, they are each doing 7 or 8 little plays, and beautifully.  Kantor's charm comes from a winning smile and slightly awkward look, not to mention a lovely voice, powerful and subtle, terrific in a lower register, and pleasant in the occasional falsetto.  And he is a very good actor - his joy infectious, his anger palpable, his sadness affecting.  Wolfe is equally adept, no small fete especially considering that she faces the uphill battle of getting us to like her when she starts in a bad place.  I think she is best in the more comedic scenes, especially her hilarious aria about being stuck doing bad rep in summer stock, and in a later scene when she's auditioning, singing her song, while giving us her interior monologue.  If you've ever sat through or given an audition, you could completely relate.  And while she sings the more sorrorful stuff superbly - what a vocal style range! - I can't help but think she'd be even better if she could sing/emote/argue to someone.  Again, any quibbles I have with their performances have to do with the material and concept, not the actors themselves.  They, and the excellent  band, are the only reasons I can recommend this show.

Every good composer/writer/artist has his share of works that don't turn out as well as the idea must have sounded - Sondheim has Merrily We Roll Along, Rodgers had No Strings, Lloyd Webber has Starlight Express.  None of them even close to perfect, but each with their own gimmicky charms.  And so Jason Robert Brown has his.  I know he is on the cusp of his huge hit.  For now, I'll just have to be patient.