BE SURE TO VOTE IN THIS WEEK'S "HOT OR NOT" POLL!

Despite the huge fan bases and social media frenzy surrounding such shows as Wicked and Newsies, Broadway just doesn't generate household names like it used to.  You might be thinking what about Kristin Chenoweth, right?  I'd say she's more generally famous for her TV work than being a Tony-winning actress. Broadway was her springboard to national recognition, not necessarily her calling card.  Not true of Andrea McArdle, who, as a pre-teen, was a national icon for being a Broadway star.  Period.  Even when she was on TV, it was because she was talking Annie and singing "Tomorrow."  Now, more than 35 years later, she is still around and is as fantastic as ever. 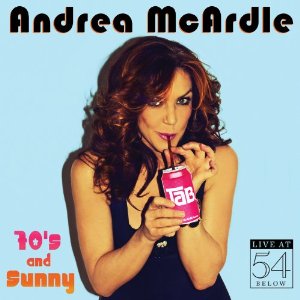 The cover art of this latest CD in the 54 Below series by Broadway Records really says it all as far what you are going to get when you buy it: a 70's icon with a coy smile with material the goes down a smoothly as another 70's icon, TAB.  The content is strictly 70's - Broadway standards and songs by other 70's icons.  In between, she keeps the patter light and quick and, most importantly, sincere.  She sounds almost as embarrassed as she is proud to have met Barbra Streisand, Brooke Shields and Michael Jackson.  And she tells some really nice stories - her obsession with A Chorus Line is sweet, and her story of being taken down a peg or three by none other than Carol Channing is as charming as it is funny.  She does a hilarious Channing impression.

Ms. McArdle is in fine voice here.  She's got an amazing range and a nice throaty lower register.  And her legendary belt is as lusty and powerful as ever.  I love her selections, quintessential 70's all.  She does a sweet "Fallin'" from They're Playing Our Song, a terrific "Wherever He Ain't" from Mack and Mabel, and a full on "Nothing" from A Chorus Line.  I particularly enjoyed her "Meadowlark" from The Baker's Wife.  Is she LuPone or Buckley? No.  But she still delivers an amazing version all her own.  And, naturally, she does "Tomorrow" from Annie; gone is the cloying nasally child, here she is all grown up and as optimistic as ever.

She also picks some great 70's standards, including a fine tribute to The Carpenters' "Rainy Days and Mondays" and a fierce reading of Billy Joel's "Angry Young Man."  And she includes lesser known songs by giants like The Jacksons and Peter Allen. She ends with a soaring "Over the Rainbow," from her film Garland in which she played Judy.

Director Scott Logsdon keeps things going at a brisk pace with just enough time to savor one delight before moving on to the next.  And McArdle's band is top notch, most notably pianist/arranger/musical director Steve Marzullo.

When you buy this CD, and you really should, be sure to take a close look at all of the publicity stills of young Annie, Miss Andrea McArdle, giving audience to such luminaries as Streisand, Jackson and one Mohammad Ali.  They were coming to see her.  A real American icon of the Broadway stage.