Looks like, at long last, the Broadway season has its sentimental crowd-pleaser!  And with the new musical, Kinky Boots, the pleasures are many, if not a tad well-worn.  I'll say, from the get go, that I really, really enjoyed this show.  In fact, I loved parts of it, and I left the Al Hirschfeld Theatre humming a tune or two and contemplating a return visit.  That said, it is not the best new musical of the season, though it might have been in other seasons. 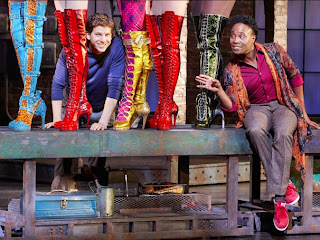 Let me get the negatives out of the way so that we may celebrate the positives.  First, there is really no new ground being covered here.  If La Cage aux Folles and The Full Monty had a baby, it would be Kinky Boots.  And it mostly works, even if the gay/drag queen thing was funnier and more poignant in La Cage, and even if the desperation of the working class and their triumphant recovery was grittier, funnier and more poignant in The Full Monty.  Maybe I'm just getting tired of the whole drag musical thing in general, but, really, isn't there another story to tell with these dazzling, gender-bending beauties?  Must every drag show feature an overcoming public hatred theme capped by an "open your heart and mind" disco number?  Just how many variations on the "I Am What I Am" anthem are there?  It is perhaps more glaringly obvious because Harvey Fierstein wrote the books for La Cage and Kinky Boots.  It is to his credit that as it is happening before our eyes, the comparisons aren't so obvious.  There are fresh jokes, and (Thank the Lord.) the central characters do not end up as a happy couple, walking off into the sunset manly arm in manly arm.  (Thank You again.)  And in this show, the troupe of drag queens are known as the "Angels."  But is there anyone reading this that doesn't already know that they are fierce, strong, sassy gals, who are sharp tongued when the wigs come off, and that the fur nearly flies in every production number they are in as each tries to "out fierece" the others?  OK, so they aren't as good as the 1983 Cagelles, but they are leagues better than the 2010 version.  Heck, from the front mezzanine, there are couple of them that I wasn't sure were really men, they are that good.  (They should put Charlie Sutton on the Sports Illustrated swim suit issue cover!)

I am a huge Jerry Mitchell fan, and have been since he danced on that drum in The Will Rogers Follies.  I think he is one of the best choreographers working on Broadway today, and he is a fine director, too.  That said, what is on stage here is not his best work - Hairspray had better dances, and Legally Blonde was more exciting to watch from curtain to curtain.  Here the dances are serviceable, but nothing really new, particularly the "Angels" numbers that, while well-executed, aren't all that eye-popping; they are more like back up dancers in The Temptations or even N'SYNC style, than anything newer. (And I never could forget he worked on Priscilla, either.)  And maybe, because most of the show takes place on a crowded unit set, sometimes the scenes feel cramped and claustrophobic.  Oddly enough, the moments of Mitchell's "A game" come when he is forced to make creative use of that limited space.  He stages a boxing match with what amounts to a couple of big rubber bands and a leg (yes, you read that right!).  And I don't think you'll ever see a treadmill of any kind again without thinking of this show, he's THAT creative with them.  Perhaps my expectations of Mr. Mitchell are too high, I can't really find fault with a minute of his staging, but I can't say it gave me goosebumps regularly, either. 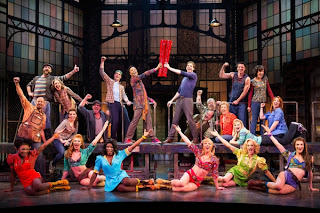 Design-wise, the whole thing is slick and professional.  David Rockwell probably had little choice in having to go with a unit set, given the size and nature of a shoe factory.  He makes excellent use of the space with a smaller revolve set that has more surprises in it than the original pie/barber shop in Sweeney Todd.  And given the number of times that we are seeing things happening in multiple locations simultaneously, Rockwell and lighting designer Kenneth Posner have worked wonders helping us keep track of where we are and where we need to be paying attention.  Posner's lighting is more than effective - it is colorful and exciting, focused and evocative - and his finale work is pure theatre magic.  The design star of Boots, as you might expect, is costume designer Gregg Barnes.  His costumes are working-class perfection and still manage to help each factory worker be individual.  The drag show costumes are outrageous and fun.  And the titular footwear?  BRILLIANT.  Each and every pair.  Kinky Boots looks fabulous from top to bottom, hip to heel. 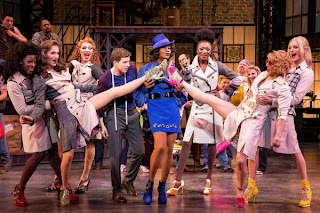 This may also be the most perfectly cast musical of the season.  The ensemble effortlessly (and often wordlessly) creates individual characters with full lives, no small accomplishment considering that we see them mostly in their factory environment.  They sing and dance with abandon, and you can tell that they all really are loving their jobs.  Ensemble standouts include the funny and touching Tory Ross and Jennifer Perry. Andy Kelso has a brief moment as Charlie's best friend that is fun, too.  And, of course, there is the fierce and fiery work of the aforementioned "Angels": Paul Canaan, Kevin Smith Kirkwood, Kyle Taylor  Parker, Kyle Post, Charlie Sutton and Joey Taranto.


Celina Carvajal has the unenviable task of playing the ill-fitting girlfriend of one of our protagonists, a fact the audience knows from the get go.  She does the role justice, making us not like her, but still not hating every minute she shows up, either.  Daniel Stewart Sherman is a riot and an enigma in a role that is outwardly funny, but also a definite antagonist.  Watching him navigate this pivotal role is one of the more interesting things in the script, and he's just terrific.  Marcus Neville takes what could have easily been a one-note factory floor foreman, and creates a well-rounded and even surprising turn.  It is hard not to watch him, even when he's not to focus of the moment.  And it looks like Annaleigh Ashford is still in search of a show that fully exploits her multitude of talents.  She does everything she can with her part as the friend of Charlie who obviously belongs with him.  She is by turns extremely funny and painfully sad; her big solo, "The History of Wrong Guys," is so funny because it is so blatantly true.  You could just feel the whole audience nodding its head in unison in understanding.  As usual, Ashford is a maximum impact performer even in the most minimal of stage time. 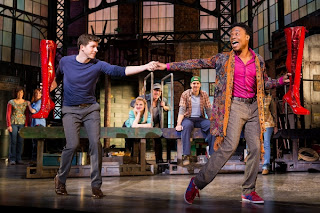 There are two stars listed in the Playbill, and it is almost impossible to think of the show without the two of them together.  I love that their chemistry is so amazing that it elevates their relationship - struggles and all - to the same importance as a romantic couple.  For me, the biggest delight of Kinky Boots is that it celebrates a life-changing friendship between two men, something you rarely see, especially when one of them is straight and the other is not.  I'm speaking, of course, about Stark Sands and Billy Porter.  As Charlie, Sands makes a rather sad young man forced into a position he loathes likable throughout.  He gets to play the full gamut of emotion - from aching despair to angry denial to hopeful forward thinker to self-doubter to triumphant achiever.  He sings the role well - "The Soul of a Man" is a small tour de force.  The much flashier role goes to Porter, as Lola, the equally struggling drag diva, who is in search of purpose and acceptance from everyone in his life.  Porter is a riveting performer who plays the more traditional broad strokes of this kind of role like a violin virtuoso.  But what really makes his performance so strong and universally appealing is that he manages to play each moment with a grounded and clear honesty.  This truth is what separates Lola from all the drag queens before her, and kudos to Porter for finding it and making it equally important.  Like yin and yang, Sands and Porter work in a tandem that is remarkable, and they are the heart of what makes the show such a crowd-pleaser.

But the real star and soul of the show is the fantastic score by Cyndi Lauper.  It is a crazy, exciting and absolutely pitch-perfect hybrid of Broadway and popular music.  She has taken great care to formulate music that fits very specifically each character and each situation, be it 90's beats, 80's synth-pop, or golden era Broadway.  Almost every number gave me goosebumps, and it was difficult to sit still and not move to the music several times.  Standout numbers include the opening number, a riotously funny ode to shoes, "The Most Beautiful Thing," the very touching "I'm Not My Father's Son," a number that'll tear your heart out, and the exciting and sexy "Sex Is in the Heel."  Even the obvious, but infinitely catchy act closers "Everybody Say Yeah" and "Raise You Up/Just Be" score big, recalling the infectious fun of Lauper's own "Girls Just Wanna Have Fun."  Even when she provides the inevitable "I Am What I Am" number, here called "Hold Me In Your Heart," it feels as fresh as possible.  Lauper, the latest pop/rock musician taking up the whole Broadway score thing, is a natural - I can't wait to see what she comes up with next!

Kinky Boots treads no new real ground here.  But how can you not enjoy a show full of characters you care about, an interesting, happy plot, with some great music?  You'll leave with a smile and a hum on your lips.  It is, flaws and all, a really fun time.  Don't miss it!