CD Review: Bring It On: The Musical and Chaplin

As the theatre year rapidly draws to a close, with new shows grabbing all the headlines, I thought it might be nice to revisit a couple of shows from the beginning of the season.  I enjoyed both (click the "Show Reviews" tab at the top of the page to read my reviews) despite their flaws.  Both Bring It On: The Musical and Chaplin, like just about every other show this season, seemed to polarize theatre fans, and neither had spectacular runs or finances.  But I do think it is erroneous on the part of the "against" camps to completely dismiss either show.  Nowhere is that more obvious than the Original Broadway Cast Recordings of these shows.

Both recordings are high quality in terms of packaging, sound quality, and very high performance levels.  Both definitely have their highlights, and both will still likely have their detractors. 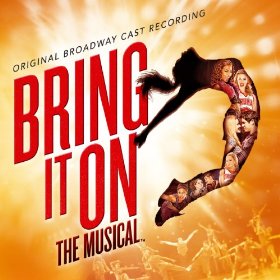 First and foremost, like the show, the CD is FUN.  It hardly aspires to more, and yet there is much to admire beyond the Sports Center vibe and the pounding rhythms of the cheer-dance mix sounds infused in much of the score.  It was nearly impossible to keep my feet still when I listen to this.   And like most catchy songs on the radio, it is fun to sing (or chant) along with the infectious hooks.  Second, it is fun to guess who wrote which songs, and who provided the mostly catchy and sometimes insightful lyrics - Tom Kitt, Amanda Green and/or Lin Manuel Miranda.  For the most part, the lyrics are spot on for trendy teens in the Twitter era, offering humorous and heaping loads of irony.  Even the over sincerity of the inner-monologue numbers work.

Third, and most importantly, the recording introduces some amazing talents who can sing and act.  It is darned near impossible not to fall for the sweet charms of misfit Bridget in the dynamic hands of Ryann Redmond, or the sassy bravery of La Cienega in the dramatic hands of Gregory Haney.  The comic Valley Girl-ish turns by Janet Krupin, Kate Rockwell and Neil Haskell as Kylar, Skylar and Steven are just as fun here as they were live.  As the geeky hero of the story, Jason Gotay really comes across on the recording as the smart and romantic voice of reason.  And "Eva's Rant" is a scream in the devilish power belt provided here by Elle McLemore.  But is it the star turns provided by the co-starring ladies of the show, Taylor Louderman and Adrienne Warren that really make this CD a must have for your cast recording collection.  What amazing voices!  Here's hoping we hear a lot more from the entire cheer-tastic cast in the future! 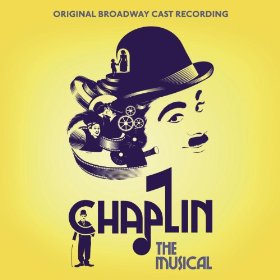 That the show was even recorded should be enough.  And I'm glad they did, since the pleasures of the recording outweigh the problems.  One of the reasons I really enjoyed Chaplin was watching how it was staged - from the black and white pallet to the recreation of silent film scenes to the often brilliant conceptual numbers.  Of course, you can't see the staging when you are listening to the cast recording.  Were the score by Christopher Curtis more consistent in quality and tunefulness, the whole thing would that much better.  Numbers like "Sennett Song" and "The Look-a-Like Contest" lose something without the visual.  The better songs are just fine without the visual - "Just Another Day in Hollywood" and "All Falls Down" work no matter what.  Character-driven songs that come out very nicely here include "Look at All the People," "Where Are All the People" and the Finale.  Still, I can't imagine what a listener might think of "Man of All Countries" without having seen it on stage.

One of the biggest benefits of the recording is that it has preserved some wonderful performances, including all three leading ladies - Christiane Noll (heartbreaking), Erin Mackey (warm and powerful) and Jenn Colella (terrific in every sense).  And of course, there's the memorable performance of Rob Mc Clure, who sings the hell out of all his numbers.  Still, as Chaplin, his entire physical performance is lost here.  One hopes that in a few weeks, his efforts won't have been forgotten.

Everyone who has an interest in musical theatre benefits every time a show is recorded.  Great performances are memorialized, tunes are remembered, closed shows are brought back to life.  Even the weaker scores have moments of greatness; a lack of recording means that those scores, like the live show itself, would be just a memory.  Like a given show or not, we should all be thankful that these two made it to CD.