CD Review: Ahrens and Flaherty: Nice Fighting You (Live at 54 Below)

Broadway has had famous composing teams throughout is long history - Rodgers and Hammerstein, Rodgers and Hart, Lerner and Loewe, Bock and Harnick, Kander and Ebb... For the last twenty-four years, Broadway has had its share of tunes contributed by the team of Lynn Ahrens and Stephen Flaherty.

They've had only five new scores on the Great White Way (so far), and they won a Tony, but they still haven't had that big breakout hit.  They've had two beloved , if modest, hits with Once on this Island and Ragtime, two flops with Seussical and My Favorite Year, and the jury is still out on this season's Rocky, a bigger hit in Germany than here.  And they've had modest success off-Broadway and regionally with shows like Lucky Stiff and Dessa Rose, and with the animated film (again, a modest hit) Anastacia.  To celebrate their 30 years together, they put together a series of concerts at 54 Below, featuring some of the stage's biggest stars, singing a sampling of their songs, past, present and future.  Listening to this terrific 2-CD set, Nice Fighting You, makes you realize that, despite not having a huge hit under their belt, they have quite a cache of amazing songs in a really astonishing variety of styles.  And you will also realize that Ahrens and Flaherty belong in that list of great Broadway composing teams. 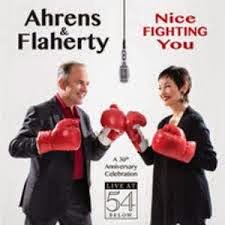 
THE TOP THREE REASONS YOU NEED THIS RECORDING 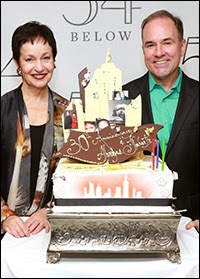 1.  The hosts are terrific!
They are articulate and charming.  Their patter is the perfect blend of humor, self-deprecation and "insider-y" gossip.  And best of all, Ahrens and Flaherty's affection for their chosen profession and each other comes shining right through your ear buds!

2.  The great selection of songs!

This is more than a greatest hits recording - and there are plenty of great hits here.  But there are also some great lesser-known songs from shows like Dessa Rose and Lucky Stiff.  And there are a few awesome gems, like Flaherty himself playing the overture from Ragtime on the piano, a song that was cut from the same show, and a few new songs from their upcoming new musical, Little Dancer.

3.  The cavalcade of Broadway stars!
The "cast list" here reads like who's who of current Broadway stars, including Kecia Lewis, Rebecca Luker, Stephanie J. Block and Mary Testa. Then there are the stars who have come back to sing the songs they created on Broadway and beyond, including LaChanze, Brian Stokes Mitchell, Bobby Steggert, Marin Mazzie (who also shows off some of the crazy she brings to her role in Bullets in an hilarious number called "Speaking French"), and the absolutely sweet Kevin Chamberlin, who recreates his Suessical numbers, "Alone in the Universe" and "Solla Sollew."  (There are several others on this recording, too.)

The bottom line is this: If you are new to their work, or love their work, this CD is for you.