LOGOS: Holler If Ya Hear Me 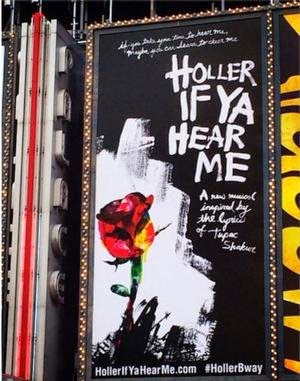 I haven't seen the show yet, so I can only give my impressions based on what I see, which is probably the most honest and exactly the experience most theatre consumers should have with a new logo. It should beg the question: does this peak my interest enough to buy a ticket to Holler If Ya Hear Me?

One can only imagine the conundrum the publicity team and the producers faced trying to come up with a campaign that shows everything it needs to show.  Does it reveal anything about what it is about?  Does it show how edgy and progressive it is trying to be?  From what I see, kind of...

The predominately black background is actually eye-catching, if you consider that it is different than most of the other Times Square billboards.  It also has the feel of darkness, solitude and anger, especially in contrast to the bright white that seems to have broken through, the jagged, sharp remains of that "breakthrough" like urban rubble at the bottom.  The white, looking like paint brush strokes (and an urban skyline, sort of), leads you to the title, also in white paintbrush strokes.  It suggests to me that the "painter" broke through the darkness, and left his mark - "HOLLER IF YA HEAR ME" for the world to see. Then there is the colorful rose that has grown out of the destruction, offering a ray of romantic hope, its multicolored petals suggesting a coming together of many forces, declaring that the world is not just a black and white place.  So far, pretty artistic... 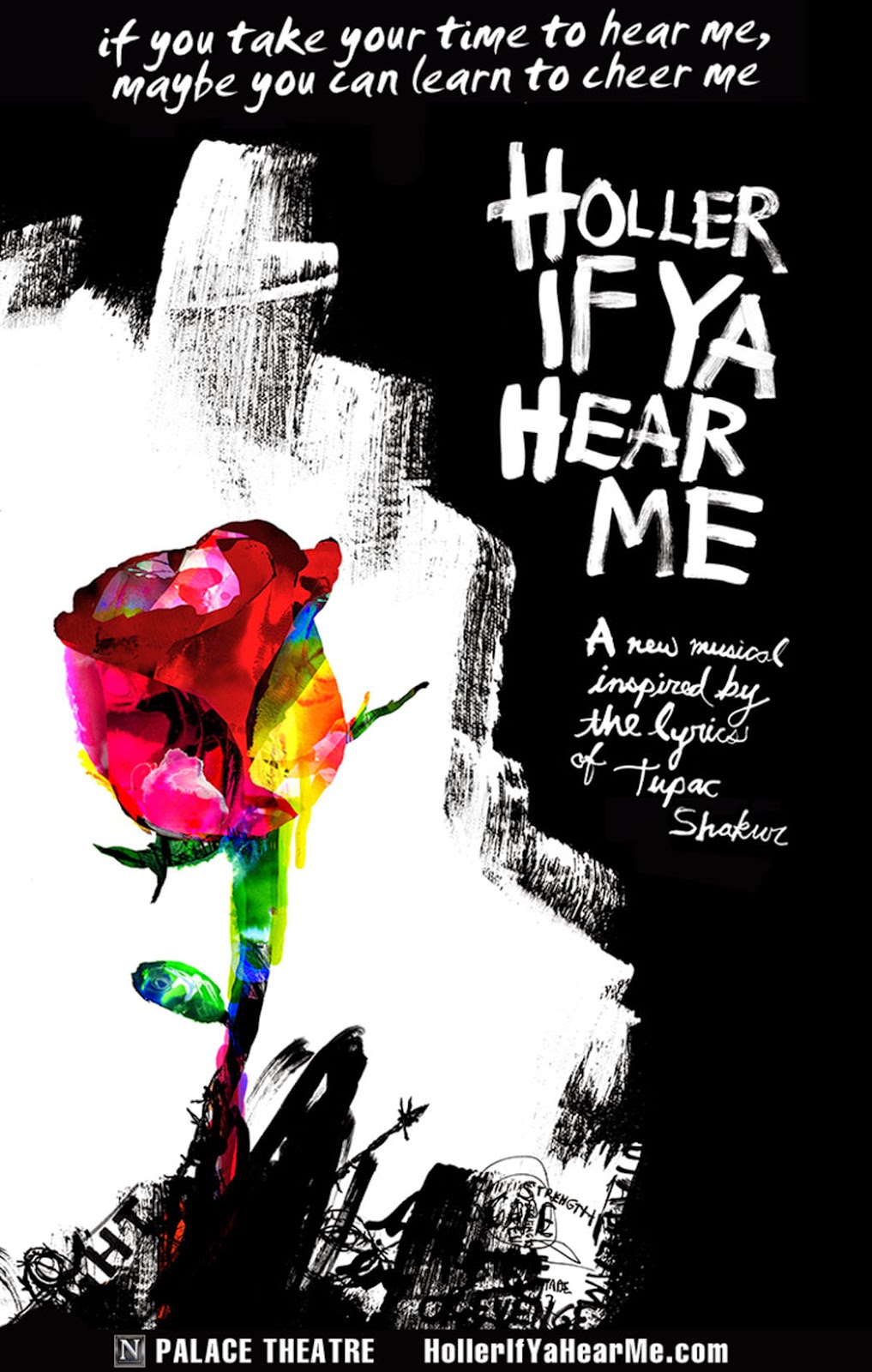 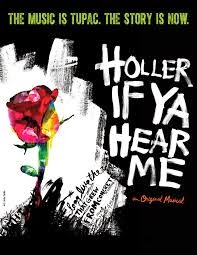 Then there is the subtitle, in a you-really-have-to-stop-and-read-it-because-it-is-too-messy-to-get-in-a-glance cursive (?).  It tells us that the show is based on the lyrics of Tupac. Does that mean it is about him, or just uses his words?  I must not be the only one who had this confusion, as later iterations replaced that with a cursive "An original musical" - to enthrall regular theater-goers who are vocal about wanting new, from scratch musicals? And the "urban stamp" font at the top: "The music is Tupac. The story is now."  Okay, so now it is his music (his lyrics are along for the ride?), and the story is a today story. (Is this supposed to imply that Tupac's stuff is old?  Or are we supposed to know that Tupac died years ago and if the story is "now" it can't be biographical?  Who knows?  And if you have to spend that much time figuring it out, is the show going to be that potentially confusing?

I guess it is very difficult to court Tupac fans, a young audience demo AND regular theatre-goers, many of whom (myself included) probably aren't familiar with this kind of music.  You don't want to alienate anyone, right?  But the whole thing smacks of compromise - big compromise.  And compromise will alienate hardcore fans of any musician AND hardcore theatre fans.  (They should have gotten together with the people behind American Idiot.) It sure is perplexing.

If being perplexed means "interested enough," then I'd buy a ticket.  Otherwise, I'd try a different show. Apparently, based on its box office numbers so far, I am not alone.