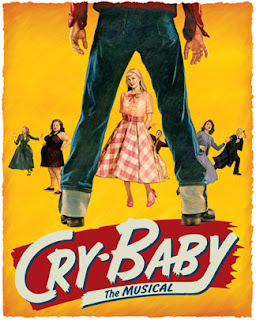 I was shocked to find out that Cry-Baby closed SEVEN years ago this week!  Shocked!  For me, that realization was one of those "what? only seven years? it seems so much longer than that!" moments.  The truth is, I really liked that show, especially the cast and the score.  And it was witty on all fronts.  It, fairly or not, was bound to suffer in comparison to the nearly perfect Hairspray.  And it saddens me that this 4-time Tony Award nominee (Best Musical, Best Book, Best Choreography and Best Score) wasn't recorded - or if it was, it was never released commercially.

Cry-Baby played 45 previews and 68 performances at the Marquis Theater.

Notable Cast Members included: Harriet Harris (It Shoulda Been You), Elizabeth Stanley (On The Town), James Snyder (If/Then), and some of my favorite Broadway gypsies and co-stars: Nick Blaemire, Cameron Adams, Charlie Sutton, Spencer Liff, Colin Cunliffe, and my buddy, Eric Sciotto.  And then there's Ryan Silverman, who made his debut in the ensemble - he went on to ply Raoul in The Phantom of the Opera, Billy Flynn in Chicago, and starred in the revival of Side Show. no crying for him!