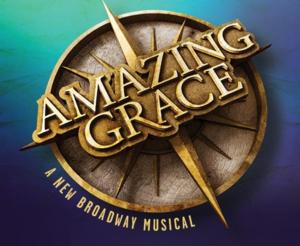 With the first new musical of the 2015 - 2016 season beginning previews this week, I thought it would be a great time to look at its logo.  Amazing Grace sets sail at the Nederlander Theatre this Thursday, and I wonder if the logo on the marquee will entice theater-goers (and tourists in general) passing by.  Of course, I hope so, but I'm not so sure.

I actually find the logo itself interesting.  It looks very nautical, especially against the ocean blue background. And it certainly looks historical.  Majestic, even.  And only if you look at it closely, does it look somewhat religious.  The title aside, the compass point, with its southerly end longer than its northern end, does look like a cross. Is it a "moral compass"?

But, really, what does the title suggest beyond the obvious?  All I picture is a church full of solemn parishioners, swaying with emotion as their voices raise as one to sing the admittedly moving song.  In fact, the tagline addresses it head on (an admirable thing).  How you see it in print might affect your interest, too.  I like how, in the version below, "The Song the World Knows" is smaller - we know this already - and "The Story It Doesn't" is much bigger.  It emphasizes that this might just not be what you expect. BUT is "A New Broadway Musical" a selling point or afterthought?

Any other season, the epic look of the production photos might entice, too.  But this year, colonial is definitely in.  Problem is, the other historical musical - opening next! - has the same costumes, but somehow looks waaaayy more hip,  In the summer heat (or the winter freeze), will audiences flock to a museum piece or an edgy stomp through history? 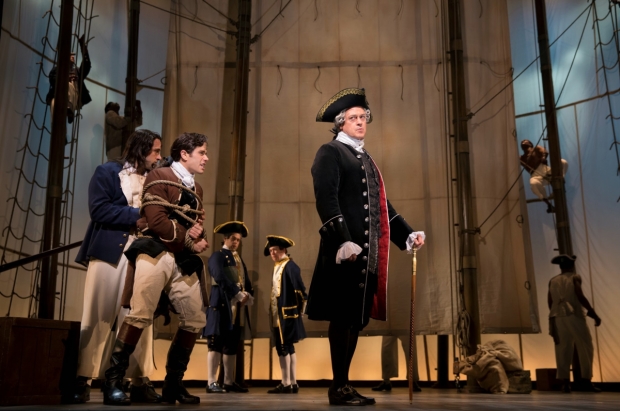 Probably the biggest thing Grace has going against it has nothing to do with its logo or production photos.  Religious-themed musicals lately have had trouble drawing crowds - ask the folks at Leap of Faith and Scandalous.  The time of year and the other colonial musical already make it a tough sell; the religious aspects might seal its fate.

I hope I'm wrong.  I'm going to see it in a few weeks (I hope).  Will it be truly epic?  Or will it come and go as quickly as a summer thunder storm?