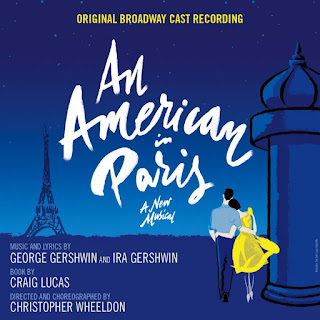 Over the years, Broadway has seen several Gershwin "jukebox" musicals.  The shows themselves vary in quality (Crazy For You - spectacular, Nice Work If You Can Get It - not so much). But the songs are glorious in just about any incarnation.  The latest entry in this growing sub-genre, the four-time Tony-winning An American in Paris, falls somewhere in between for me.

The book (Craig Lucas) has some nice dramatic weight, but lingers far too long in each act, particularly in the eon between the end of the title ballet and the curtain call.  And while the staging and (even more so) the dancing are truly breathtaking (both by Christopher Wheeldon), the company's strengths and weaknesses are apparent throughout.  The ensemble is uniformly amazing.  However, the principal cast is primarily divided into two camps - dancers with passable acting and singing skills, and singing actors with passable dancing skills. When you see the show live, you can sense the individual imbalances, but they are easily forgiven and forgotten when the cast is called upon to use their better skill set.  It is clear during the dance scenes why Robert Fairchild and Leanne Cope were hired, just as it is apparent why Jill Paice, Brandon Uranowitz and Max von Essen were cast when you see the book scenes.  In fact, it is when any of the three of them are playing in your ear buds, that this cast recording truly soars.  "I'll Build a Stairway to Paradise" is as much a standout here as it is at the Palace Theatre.  But, while the actors can come across by acting the songs as they sing them, the dancers' numbers are passable, but not great, in the singing and acting department.

I mention all of this because, as wonderfully produced as this Masterworks Broadway cast recording is, the flaws of this show come through more obviously than with other shows.


The 28 piece orchestra sounds amazing in the instrumental ballet sections particularly, and if you are a Gershwin fan, like I am, that experience is, well, music to your ears.  The tracks at the beginning and end of each act are the ones I'll listen to over and over again.  If Gershwin isn't really your thing, but you loved it in the theatre, it's too bad that you can't see the stunning ballets being performed.  The production numbers also sound great, especially if you have seen the staging and the characters performing them.  But I can't imagine what you might think about "Fidgety Feet" or "I Got Rhythm" only hearing them without the benefit of having seen them.

I suppose that's odd to say about any Broadway Cast Recording, since you can never tell what's actually going on unless you've seen it.  Still, as a point of comparison, the dance/staging- heavy Crazy For You is just as thrilling to listen to as it was to see it. (23 years later, "Slap That Bass" and "I Got Rhythm" still give me goose pimples when I hear that recording!) I guess my point is this: An American in Paris is a nice (if flawed) show as you are seeing it, but taken by itself, the performance of the score is less than glorious.

Full Disclosure: I received a review copy of the CD from Masterworks Broadway as compensation for this post.