REVIEW: Hedwig and the Angry Inch (with Darren Criss) 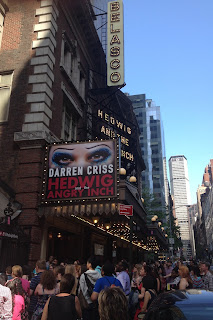 Review of the Saturday matinee performance on May 30, 2015 at the Belasco Theatre in New York City.  Starring Darren Criss, Rebecca Naomi Jones and Tits of Clay as The Angry Inch.  Musical Staging by Spencer Liff.  Directed by Michael Mayer. 100 minutes with no intermission.  Darren Criss plays Hedwig through July 19.

It probably sounds odd to hear me say that Hedwig and the Angry Inch is not one of my favorite shows, especially when you consider that I just saw it again for the fourth time.  Each time I see it, I have no regrets, and it speaks volumes for the show itself that every time I see it, I get more out of it and appreciate it more, which is why I keep going back.  What is so great (and potentially not so great) about the character is that it is a gold mine of opportunity for good actors.  It can be played loud, proud and narcissistic (NPH version), or it can be played as deeply wounded with multiple layers of angst, anger, sadness and broken ego (MCH version).  And it seems, that an equally valid performance can be made of intense, reactionary anger coated with a thin veneer of self-loathing inspired self-deprecation and biting sarcasm, as currently performed by a (not nearly as odd as it sounds) decidedly youthful Darren Criss.

Criss attacks this role with a vengeance; his Hedwig (and apparently Criss) has something to prove to the world.  His relative youth adds an aggressive vibrancy to the physicality of the role and to the ferocity of every emotion Hedwig goes through.  It occurs to me that this time around, with a younger Hedwig there is a sense that she could still turn things around, whereas with more "mature" actors, we saw a Hedwig settled in for the long haul, an alternate future no longer a real possibility.  For me it works, though the intensity was at first off-putting.  Criss' voice is incredible - the ballads are gorgeous, and the rock numbers are edgy with a rich, full-throttle styling.  Anyone worried (or worse, anyone who just assumes) that you'll get a Glee boy in heels and nothing more will be both surprised and delighted.  There is zero trace of Blaine here.  And as terrific as he is as Hedwig, he really brings it as Tommy Gnosis; it is a simply stunning transformation. 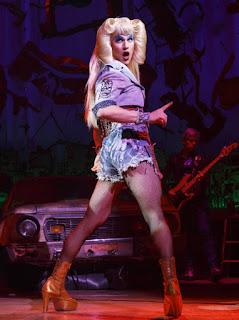 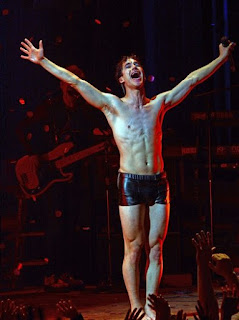 The 2 sides of Darren Criss in Hedwig 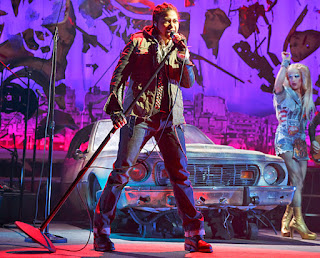 Also new to the mix is Rebecca Naomi Jones as Yitzhak, who fits with this Hedwig like a hand in a glove.  While I did miss Lena Hall, who, for me, gave the definitive performance in the role, Jones brings a different vibe to the role that is very effective and emotionally satisfying.  Alternately wide-eyed and terrified and defiantly angry, this Yitzhak is as freshly wounded as his wife.  When he cowers in fear or silently begs for forgiveness from his violent partner, you can't help but feel empathetic with his plight. And when he finally has had enough and acts out in defiance you immediately feel almost proud of him.  Still, Jones and Criss have created a volatile and wholly satisfying relationship that makes you see it from all sides.  Best of all, the payoff at the end is inspiring.  "Midnight Radio" is rock and roll bliss.

Having seen it now four times, I even more appreciate the artistry that the musicians and creative designers bring to Hedwig.  The band members seem even more invested in the show, and have even more interaction in the story and show.  And I'll say it again: Kevin Adams is the best lighting designer working today. 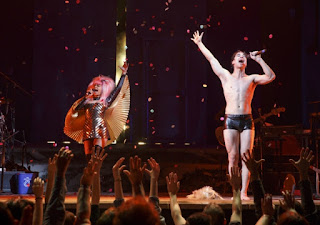 Lift Up Your Hands for Criss and Jones

I know that without NPH, this production wouldn't exist, but both Hall and Criss were/are better in the role if for no other reason than from the moment both take the stage, all you see is Hedwig. Wounded, broken and all her bewigged glory.  It is a shame that crowds aren't turning out in droves for Mr. Criss - at the performance I attended, the entire appreciative and enthusiastic audience could have easily fit in the orchestra section.  Not to worry, though, I never once felt he was giving less because there weren't more of us there.  He dispels any preconceived notions before his heels even hit the hood of the car.