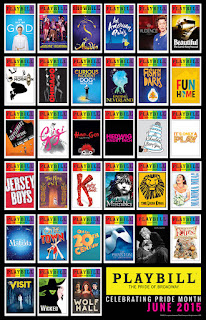 I started out with today's blog as just my musings on the Playbill Pride Poster, which I recently added to my collection.  I love all of the Playbill posters (and the rest of their merchandise).  But, as a gay man who loves the theatre and has seen how it transforms, empowers and has facilitated change.  Needless to say, the Pride poster caught my eye immediately, and I just had to have one.

What this blog ended up being, though, came as a very pleasant surprise.  When I got my poster, I took to Twitter to thank its creator, Robbie Rozelle.  Then, just today, as fate would have it, the platform I write this on was down, So I wandered over to Twitter while I waited, and saw Robbie on there again.  So I took a chance, and asked him a few questions about the poster and how he works.  He kindly (and quickly) obliged, and here's the scoop (and a very inspiring story, too!):

JEFF: Can you talk about Playbill's commitment to Pride Month?

ROBBIE: I’m not on the editorial team of Playbill- I’m the graphic designer and very happily art directed and designed the Pride issue. I can tell you personally how much it moves me to know that something I love so much, and a company I love so much, is so dedicated to the Pride cause. As a teen, I used to walk down the hallways of high school singing show tunes, and can honestly say that musical theatre saved me from killing myself, so if we are celebrating what is possible, I think that is amazing.

On Saturday night, I searched the hashtag #PlaybillPride on Instagram, and found this from a 17-year-old, who could have been me: https://instagram.com/p/35QZEawwKp/
"I wanted to take a minute to talk about just how much better the Playbill for Wicked made the actual show, which was wonderful in itself. The Playbill is a special Pride edition. Being from the South, I can't say I've ever actually seen people truly being prideful. However, I've actually seen multiple pride flags in New York, and to see something as big as the Broadway show of Wicked supporting the cause is really overwhelming. I've felt a lot of comfort here, a lot more than I usually feel back home. Thank you Broadway for your wonderful acceptance and your stance on the right side of history #playbillpride”

Just knowing that I am a part of that, that I am woven into that history now, was terribly moving for me.

JEFF: How did the poster come about? 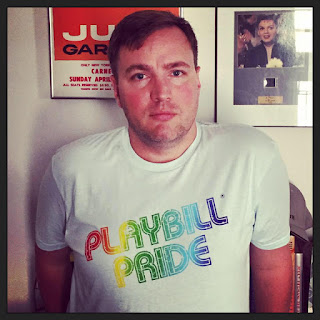 ROBBIE: Last year, we didn’t really think about Playbill Pride merchandise - it was something people asked about, wanting it on a t-shirt or a hat. This year, with a little more foresight, we decided to create this poster. Not all of the shows on it actually have color playbills (Roundabout doesn’t do them, for example, and some long-running shows have switched to black and white), so I set about colorizing the ones that were always black and white or that were formerly in color but had changed to B&W (i.e.: Finding Neverland). It was a little difficult because we wanted this for June 1, but we knew the Tony nominations might cause some shows to close and we wanted it to reflect June. As it turned out, we were correct, and some stuff indeed folded right after the Tony nominations came out, but what we were left with became this beautiful, colorful celebration of the pride of Broadway.

JEFF: What is your design process?

ROBBIE: My design process is so different from project to project. Because I had designed the Pride logo last year, we knew going in that we were going to use it again. This was the first time I had designed the magazine, and created a style through it. I worked with the Editor in Chief, Blake Ross, to create something that was really beautiful. I wanted something that reflected what I would want to read and KEEP. We hit upon the idea of including quotes from the various plays that the writers profiled had written, to tie everything together, along with the rainbow banner on the top. I’m really happy with it, and got an email from my mother today saying she was, too. I really think that readers are responding to it. I can’t speak for Playbill, but I’m really hopeful it will become an annual thing.