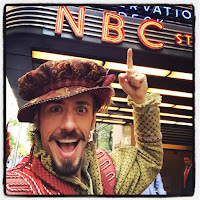 It is always great to see terrific performers in great show after great show.  And I hope it is obvious how much I appreciate the truly amazing folks whose names aren't above the title - the gypsies.  One of those professionals is the gifted and (now) long-time friend of this blog, Eric Sciotto.  Over the past couple of years, Eric has been so generous with his time and insight.  Today, we catch up with him in the midst of the craziness of rehearsing, opening and doing press for the latest show on his resume, Something Rotten!

ONE: Welcome back, Eric!  The last time we chatted, we were actually face-to-face after you killed it as John Jasper in Drood.  So what have you been up to since then – professionally?  With your family?

ES: Why, THANK YOU! I hear there's some bootleg audio of me as Jasper! (hint hint!). SOOO much has happened since then!  Let’s see… Professionally:  I took a much-needed break, taught for a dance studio for a year, directed a fierce production of #IntoTheWoods, finally completed my “I played every male role in A Chorus Line” life-goal, played an 18 year old in the same summer, ate a TON of Lobster, jumped on The Bandwagon at City Center, directed a fierce production of #Xanadu, and then started my 12th Bway show (SOMETHING ROTTEN!) which just opened!  Family:  laughed a lot, cuddled a lot, did a TON of laundry, changed a LOT of diapers, prepped a LOT of meals, kissed a LOT of boo-boos, read a zillion books, played a ton of Legos, and tried to keep everyone alive!

TWO: Considering the immediate and sometimes intense scrutiny of performing live in this age of social media, what was the best thing about getting Something Rotten! on its feet and ready for opening night?  What was the worst part?  Do you read the message boards, Tweets, etc.? Why or why not?

ES: There was a lot of buzz… we were exciting and mysterious…. no out-of-town?!?! Cold-open on Broadway?!!? Wild! I avoided message boards for the most part. I've read them in the past, but decided that I didn't want to invite that negativity into my life this time. A LOT of people are REALLY opinionated about stuff they haven't seen or stuff they know very little about. Sure there are a lot of supporters too… but I just chose to stay away this time… and I feel better about that. That said, I'm very active on the Twitter (@E_DaddySciotto) and FB, and so I've seen a LOT of posts and opinions… and the buzz has been incredible…. I'm really proud and happy to be a part of this VERY ORIGINAL MUSICAL with an incredible creative team who were not afraid to put in the work and sometimes make the hard decisions…. They were hell-bent on making the best version they could and clearly, it's smelling like a HIT!

ES: You're right! It's major! It's like a colossal game of Theatrical Tetris back there! Luckily we have awesome and skilled stage crew and wardrobe professionals to make it all happen! Most Challenging Moment Backstage, is probably my quick change after "Musical" or the one before "To Thine Ownself." They're just super-fast. No time to think or breathe or get water. What would be awesome for the audience to see backstage: Maybe all the mid-number shoe-changes we do… like into our taps in the middle of "Bottom's On Top." It's like a pit crew at a race, boots-off-tap-boots-on-tap-microphones-attached-and-GO!

FOUR: You have had the great fortune of working with some of the legendary greats – Chita Rivera, John Lithgow, and Bernadette Peters – and some the current crop of Broadway greats – Brian D’Arcy James, Christian Borle, Will Chase, Kelli O’Hara.  You, like they, have had a long career on the stage.  What do think it is that all of you have in common?

ES: I HAVE been very lucky to work with incredible people…. and watching them is like a constant Master Class! Kelli is actually one of my oldest friends! We were dance partners at Music Theatre of Wichita in 1997…. I'm so excited and proud of all she's accomplished! And it's been a blast to be reunited with Brian 13 years later (we did Sweet Smell of Success together). He's INCREDIBLE. What do we have in common?! I don't know… a refusal to leave?! Ha!

FIVE: I’ve has the pleasure of seeing you go on for a role you’ve understudied, as I mentioned earlier.  This time around, you are again understudying TWO of the main roles – Nigel Bottom (John Cariani) and Shakespeare (Christian Borle).  They couldn’t be more different.  Now that the show is settling in for a long run, have you had much time to work on these roles?  How do you approach each?  What tips/advice have their originators given you about it?

ES: The crazy thing about understudying is that you really don't get any rehearsal until after you open, that said, you want to be able to jump in if your person has a fitting or is sick one day. So I try to do everything I can on my own. I think "if I had to do this role TODAY, what don't I know?" And then I make a list of what I don't know and I figure it out, or ask the AD or the DC... Now, when a show is constantly changing, it can be overwhelming. I worked at home to be off book on a scene and walked in the next day and the scene was 100% rewritten. So at some point I let myself off the hook a little and thought "you need to let them settle on a version and THEN worry about this."

After we opened, we jumped right into US rehearsals. Every role has two covers, and we have primary and secondary focuses, and so I've been rehearsing Shakespeare from the get go, and we've already done full US run-throughs. So this week we'll switch to secondary focuses, and I'll finally get to start working on Nigel. Now, of course I've done a lot of work on my own, but it'll be great to start working on it with everyone else.

Approach: Nigel is tougher for me because John Cariani is so delightfully and loveably quirky. And that's so real for him and so unique and individual. So to unlock MY own version of that is the job. I CANNOT just do it like John does because it wouldn't be right on me. I gotta find my own path. Shakespeare has been a JOY for me to play around with. It makes so much sense to me and it's like I get to smush a few of my favorite iconic characters together and play them all at once: Frank N Furter, Austin Powers, and Patsy from AbFab! (Oh! And a little bit of Uncle Scar.) It's gonna be fun when I finally go on.

As far as tips or advice from the originators: That's not really a thing. I don't talk to them about it much. No one wants an understudy breathing down their necks. I try to do all my work and get detailed as possible and watch them and learn from them from the shadows.

BONUS QUESTION:  You share the stage with two of my personal favorite Broadway ladies – Angie Schworer and Heidi Blickenstaff.  How great is that??

ES: It’s AWESOME.  They’re both such incredible ladies!!!  I’ve admired HB since I saw her in [tos]! My GAWD she was fierce! And I knew her peripherally… but it’s WONDERFUL to finally work with her.  And ANGIE!!!  We crossed at Annie Get Your Gun for a hot second back in like 2001?  She’s THE ULTIMATE ICONIC AMERICAN SHOWGIRL.  I keep trying to get her to approve of my bevel and my tipping.  #IJustWantToBeFierceLikeHer

(Photos provided by Eric Sciotto, credited where necessary; Something Rotten! production photo by Joan Marcus)
Posted by JK at 7:30 AM