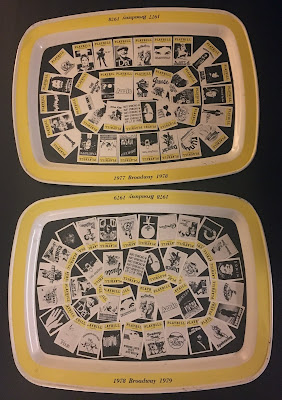 If you read my blog with any frequency, you know that I have my Broadway "things." I'm pretty sure many of you do, too. And as many of you know, I have a particular affinity for anything Playbill-related. I'm not just talking about keeping the little magazines the ushers hand out, either. I have lots of stuff with that black and yellow logo on it.  Maybe the most unique thing I have in that collection is actually a pair - Playbill trays!

I'm not sure if there are/were more of these in the series, but I'll take what I can get! Thank you, eBay... There is a lot here to chew on, though.

Both seasons represented (1977-1978 and 1978-1979) are a few years before my first "on" Broadway shows. But I did see many of these shows on national tour, and later in revivals. In any case, I love the history these represent.  I think it is important to know about Broadway history from all different periods. These trays are a cool way to learn a little - and to serve drinks on Tony Awards night. (OK, so I have never done that...) 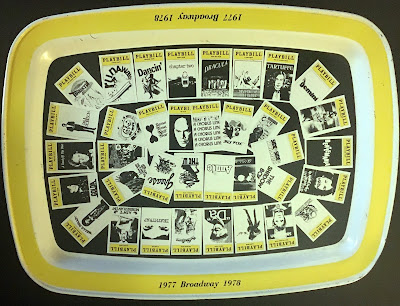 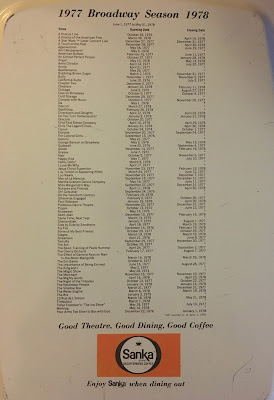 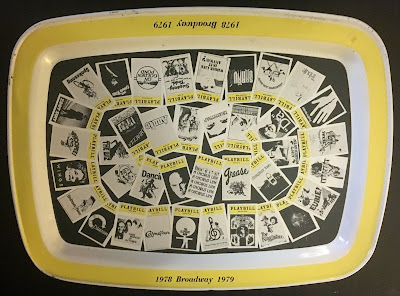 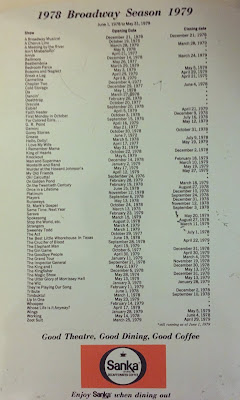 Famous Shows: They're Playing Our Song, Sweeney Todd, Ballroom, Dracula
Shows Then Playing Now/Recently: The Elephant Man, The King and I
Most Interesting Title: Murder at the Howard Johnson's

Can you imagine seasons with 85 and 69 shows? How awesome, right? And thank you, Sanka, for sponsoring these fun keepsakes! "Good Theatre, Good Dining, Good Coffee" is a philosophy I can really get behind.

(Photos by J. Kyler) Click the pictures to enlarge them!
Posted by JK at 7:30 AM