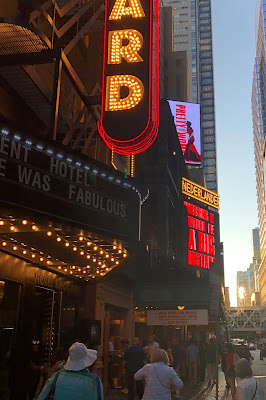 I am not one of those who believe that Pretty Woman, both the film and the musical which opened last night, paints women in a particularly bad light. Vivian, the title woman, may be a hooker, but she's a survivor, fighter, and has self-respect and dignity And, while it may be a man who changes her fortunes (monetarily), she's the one who teaches him a thing or three about life. As she says, "She saves him right back." The Broadway version of her tale definitely puts her front and center, both by way of Jerry Mitchell's direction and the thrilling performance of Samantha Barks, who also gets to give the bad guy a pretty convincing beat down. In this day and age, that may not be enough for some. And that's too bad for those who miss out on it - the show is a fun romp with some great acting, singing and dancing.

Pretty Woman, like most other film-to-musical projects, is in a damned if you do/damned if you don't proposition. If you don't keep all of the beloved moments, fans are disappointed. If you don't create enough "new" moments, you disappoint everyone else. It is a tough balancing act; in this case, it's even tougher because so much of the movie is iconic moments. Sadly, Garry Marshall passed away before getting to complete the book for the musical, so we'll never know what (if any) changes he would make. Not surprisingly, his co-writer, J.F. Lawton left most of the film script in tact; he was, after all the film's writer. And, in truth, there are no real surprises here. Unlike, say, Legally Blonde, which cleverly musicalized some unexpected film moments (the courtroom scene comes to mind immediately all these years later), Pretty Woman musicalizes a few expected broader scenes - Vivian's shopping spree with Edward and the opera scene (major kudos, by the way, to Brian Cali and Allison Blackwell who offer a beautiful snippet of La Traviata, garnering thunderous, well-deserved applause). But Broadway newbie Bryan Adams (co-writer Jim Vallance has some Broadway credits) does offer a score of pleasant pop tunes and power ballads that dig into the characters' turmoil and inner feelings. Sondheim he isn't, but the songs match the light feel of the piece. There are also a few catchy numbers (each act opens with exciting production numbers), and Mitchell gives his ensemble plenty of opportunities to dance. Notably, he uses the ensemble, which plays both kinds of Hollywood types - street people and corporate executives, to underscore the differences between these "classes." It's a nice, subtle-ish way of driving home the theme.

The design team manages to find a balance between the expectations of the movie's fans and creating something suitable for the stage that doesn't pull focus from the heart of the story - the people.  To that end, Kenneth Posner and Philip S. Rosenberg's lighting is pretty standard issue, but it creates the appropriate moods and sets the scenes.  David Rockwell's scenery (set pieces, really) is similarly functional and pleasant to look at. Since costumes are literally attached to the people, designer Gregg Barnes' work has the most impact. He also has the toughest job. Does he recreate iconic looks or create something new? The answer is: both.  Vivian's hooker look is a carbon copy of the film, but the famous red dress she wears to the opera is more an homage than a replica. He has also created dozens of ugly/beautiful costumes for the various denizens of Hollywood. Of all the technical aspects of the show, the costumes standout.

Jerry Mitchell does his typically reliable work here.  The pacing is brisk; the transitions between scenes are polished. And the dancing is good, if not particularly trendsetting. Pretty Woman doesn't need to dance, so he smartly has used it as an accent to the whole stage picture rather than gum up the works by throwing in numbers for the sake of doing so. For better or worse, his work here never gets in the way of the story telling, but it really doesn't add much to it, either. What he's created is a good stage version of a beloved film. He doesn't tinker with it. Fans of the film will be happy (I was). Theater lovers may ask, "did this need to be a musical?" (I asked). It works as entertainment for sure - it's a fast, fun 2+ hours.

So, while Pretty Woman: The Musical doesn't really break any new ground - its Cinderella/Pygmalion roots are showing - it does enough to feel fresh. There is also no doubt that this is a slick, lively and really fun night out. Look up "crowd-pleaser" in the dictionary and it will likely feature a picture from the show as illustration. Much of the credit for the success of this show (and it will probably be a success no matter how it is critically received) lays with the fantastic from top to bottom cast.

As I mentioned earlier, the ensemble does double-duty, playing a wide range of characters: business men and pimps, hookers and Rodeo Drive salon snobs, all while singing and dancing up a storm. Then there's Tommy Bracco as the impish bell boy of the Beverly Wilshire (a role significantly increased from the film). He lights up the stage every time he's on it, and you can't help but smile. Perhaps because this version focuses on Vivian and those in her orbit, the real bad guy of the story, Edward's icky pervert lawyer, has seen his part reduced, which is too bad since the always delightful Jason Danieley plays the role. What he does is significant, but I think the big climax of the story would have had a bigger impact if his part was larger, his well-deserved beat down notwithstanding.  As Edward's near takeover victims and later allies, Ezra Knight and Robby Clater are a welcome pair of do-good corporate types.

If Vivian is Cinderella/Pygmalion, then she is in good hands with her fairy godmothers - a tough as nails co-worker who shows her how to survive with a modicum of self-respect, and the hotel manager who helps her find her strength and inner beauty. The former is played by the always entirely fabulous Orfeh, who not-too-surprisingly steals every scene she's in and belts out her numbers with a ferocity that elicits screams of approval. I've yet to see her do a less than amazing job. The latter is an actor who I've seen in every one his Broadway outings, but here really takes it to a new level. Every time he's on stage, Eric Anderson is terrific, whether he's the Happy Man panhandler or that benevolent hotel manager. And he plays the arc of that character - from simply wanting to dress up the hooker so as not to embarrass the hotel to genuinely caring for his new protege - with a heart-warming finesse. Anderson truly stands out in all of the best ways. He's surely come a long way since Soul Doctor.

The star attraction, of course, is the central pair at the heart of the story. The uber-talented Andy Karl, is a smoldering presence throughout. As Edward, he takes a back seat to the titular woman, and his wise use of underplaying and quiet moments draw you in; the payoff of Edward's transformation is all the more satisfying for it. Charisma drips from his every pore and you can feel it all the way up in the mezzanine. His quiet strength offers the perfect counterpoint to the beautifully exuberant performance of Samantha Barks, who walks away with the whole show. She is mesmerizing in a star-making turn. Of course, she's beautiful (act one closes with a number all about that), but that is the least of what she does here. The range of emotion she shows, from vulnerable to pragmatic to strong to childlike wonder are all irresistibly charming, and all with presence to spare. And can she sing! The cast recording will be worth getting just to hear her powerful "I Can't Go Back." I am smitten with Broadway's newest diva.  I think you will be, too.

There's nothing wrong with a faithful, fun movie to musical adaptation. Do I wish there was a bit more of a difference, one where we see the story open up and do things that the stage can do that movies can't? Absolutely. But the superb cast, including more than excellent principals, makes up for the lack of originality. I'm really glad I saw it, and recommend it for taking people for whom theater isn't really their thing. They will likely love it.