REVIEW: The Boys in the Band 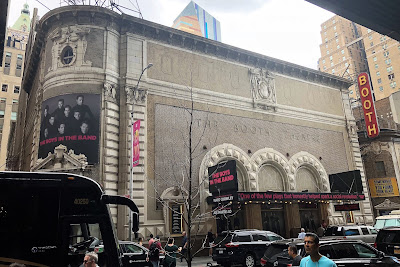 Perhaps a more apt title for this hilarious and unrelentingly biting examination of gay life in the late 1960's would be Mean Boys. The Plastics, a few blocks over, could learn a lesson or two these fellas who may have written the book on cruelty. Really, watching this tightly directed (by genius Joe Mantello), superbly acted piece must be what it feels like to open a time capsule. You can laugh ruefully at the silliness of a time past, maybe even missing it a little, and maybe a little regretfully. But then, as you look more closely, you may recoil at the horrifying realization that times may change, but people never really do.

The pink-tinged mirrors that make up the walls on David Zinn's ultra-mod bachelor pad never allow this band of boys a place to hide - the ultimate see and be seen set up, where one can primp and re-style as needed, but also where one cannot get away from himself. Wealth and status pervade every detail in the setting from the marble base table and the room sized velvet covered sectional to a closet filled with expensive sweaters and an impressive row of designer shoes. Were this a modern day tale, the decor might be a little different in color and the clothes more up to date, but change out the turntable with a cutting edge digital device, and probably a huge curved-screen Smart TV, and this could be today. It's the perfect setting for observing a surprise birthday party.

The nine man cast is uniformly excellent. The eye-candy call boy stud known only as Cowboy is played by Broadway debutante Charlie Carver of Teen Wolf fame. He is, in fact, eye-candy, but he delivers a smart performance - no small feat considering the character is largely vacuous. But his very self-aware exit line betrays what I kind of suspected all along: Cowboy isn't as dumb as he looks. An interloper to this gathering as the "straight" college roommate of the party's host, Brian Hutchison has a most challenging role; he's definitely not going to get much of the audience's sympathy after revealing his prejudices and physically bullying another guest, and yet, he's compelling throughout, and even manages to get a bit of sympathy after all. It is interesting to realize that the character that ends up really getting the short end of the stick is the one that resonates the most with me. And outside of us both being gay, I have no outwardly direct connection with the character played by Michael Benjamin Washington, but his struggles, painfully and poignantly revealed, hit me like a punch in the gut. I, too, have felt the agony of loving a forbidden guy, and who among us hasn't hidden our true self by code switching? His was a genuine, moving performance.

Tuc Watkins plays what today is kind of a stock gay character - the guy who marries, has a family, then sacrifices it all when he finally admits to himself that he isn't straight. Not much new ground is broken here (Band kinda started it all, really), but Watkins is compelling to watch nonetheless. Just watching him watching the man he loves was a master class. Always a favorite of mine in every show I've seen him in, Robin de Jesus did not disappoint here.  I'll admit I was concerned that his effeminate, tortured Latino characterization might lapse into a combination stereotype/been-there-done-that performance. He's been down this road before. Boy, was my concern misplaced. He is working on so many levels at once, it is mind-boggling. And dude can work a fan.  If de Jesus' performance began in familiar territory, the opposite can be said of the explosively dark turn of Zachary Quinto. What a stunning, thrilling surprise. Every single syllable he utters drips with an astonishing depth of character. His performance is very austere, and every single move he makes is calculated for maximum impact and damage. Such control is both mesmerizing and frightening. Another brilliant stage turn - come back soon. Please.

Andrew Rannells also offers a departure of sorts from his more famous roles.  It was nice to see him stretch (one of the best parts of years of theater-going is watching favorite actors grow and surprise you). Nasty, mean even, and honest to the point cruel, his performance is fiercely unflinching. But it is also evident why everyone he come in contact with wants him, even if it means certain pain, and to Mr. Rannells' credit, all of those facets, often on simultaneous display, are razor sharp. Matt Bomer, making a stellar Broadway debut, has a deceptively easy role, one that requires him to mostly observe and add commentary occasionally. But it is not easy to remain as present and fully engaged. I found myself watching him even when he far from the focus of the action. He is a natural on stage, with charisma and presence to spare. (And he may single-handedly bring back a return of the tighty whitey!) I'm already looking forward to seeing him on stage again.

The real breakout here for me is the harsh and ultimately heartbreaking performance of Jim Parsons. Often, when an actor becomes so well known for a particular role as Parsons is with Sheldon Cooper of Big Bang Theory, they never seem able to get out from under that when the show ends. After witnessing this, I am more than confident that he will be able to move beyond his TV persona. That he can be funny was never in doubt, but to be honest, I'd never ever have guessed he was capable of what he did in the last half hour or so of the show. I was not prepared for it; days later, I am still haunted.

The Boys in the Band definitely shows us where we've been and how far we've come. The play's scathing commentary on the destructive nature of many in the gay community, and the sobering final tableau of self-loathing are a powerful reminder of how much further we still have to go.