When the "Best" Isn't Your "Favorite": Kinky Boots vs Matilda

Next in an occasional series, the year is 2013. There are musical revivals I  love - The Mystery of Edwin Drood, Pippin, Cinderella, - a couple I really didn't care for hate - Annie, Jekyll and Hyde There are new musicals I admire - Elf, Hands on a Hardbody, Chaplin, A Christmas Story, a couple I hate (and I mean really hate) - Scandalous, Motown. But there are two that stand out above the crowd: one, a funny, heart-warming tale of self-love and acceptance, the other a deceptively grown-up kid's story about triumphing over your circumstances. The former, a Broadway-style crowd-pleaser called Kinky Boots, is the winner of the Tony Award for Best Musical, and is still running today. The latter, a smart, odd, off-the-beam treat from London called Matilda, critically adored, beloved by fans, closed after just over three and a half years at a loss. You can guess which one I loved. 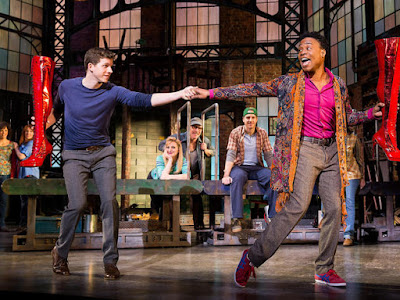 Don't get me wrong. Kinky Boots was entertaining and had a great message. Cyndi Lauper's score was the best part of it, and the cast was first-rate. Star turns all around, but particularly from its two stars, Billy Porter and Stark Sands. I still remember their chemistry. And there were some nice performances by the supporting ladies, the always fun Annaleigh Ashford and Celina Carvajal (who you might know these days as Lena Hall).

The rest of the team did fine, if not particularly ground-breaking work. The lights and costumes (by Kenneth Posner and Gregg Barnes, respectively) were colorful, and David Rockwell's sets were detailed and functional. Jerry Mitchell did a great job of keeping things moving and the choreography fit the piece, but, again, nothing really new, either. (This entire team is also responsible for the similarly fun and serviceable Pretty Woman this season.) Finally, while it is well-constructed and funny (in spots), Harvey Fierstein's book felt like a re-tread of both La Cage aux Folles and Torch Strong Trilogy. Outside of Ms. Lauper, I've seen better, more exciting work from the creative team. Kinky Boots wasn't even my second favorite new musical that season - that was Hands on a Hardbody. 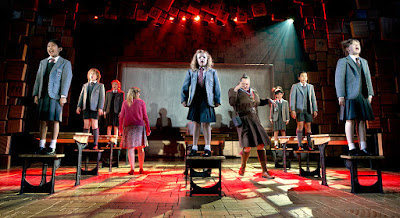 Then there was that feisty British girl, who overcomes unbelievable circumstances with strength and dignity, teaching the grown-ups in her life (and in the audience, too) a few lessons along the way. What I loved about Matilda is that it took a lot of risks and didn't hold back. No excuses. Dennis Kelly's Tony-winning book and Tim Minchon's lyrics (and music) were a marvel of wit, intelligence and heart, proving that a show aimed toward kids needn't pander to them. It was truly wondrous to see a show that could be enjoyed on many levels. It may be easier for me to list the songs I didn't enjoy (there are none), so I'll list my favorites of my favorites: the opening one-two punch of "Miracle" and "Naughty," the exciting finale, "Rotten Children," and the extremely touching, thought-provoking and tears-flowing-every-time-I-hear-it "When I Grow Up." 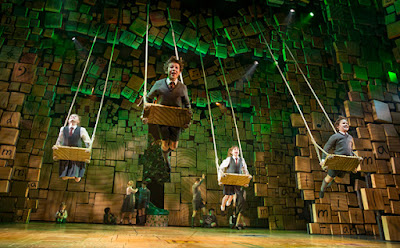 It was just as exciting to watch. Rarely are the sets, costumes (both by Rob Howell) and lighting (by Hugh Vanstone) as exciting as the show, and even better, they didn't overwhelm the show itself. It is not surprising that they won Tonys for their work. Much of the thrill of Matilda for me was watching the endlessly creative and meaningful direction of Matthew Warchus and choreography of Peter Darling. Then there was the cast, tops at their craft, from the ensemble to the leads. Has there ever been a more lethal and hysterically funny trio of villains than the Wormwoods and Miss Trunchbull? (Tony-winner Gabriel Ebert, Lesli Margherita  and Bertie Carvel, respectively) But the real treat was the heart-warming performance of the sweet Miss Honey (Lauren Ward) and the truly miraculous ball of fire Milly Shapiro as Matilda. 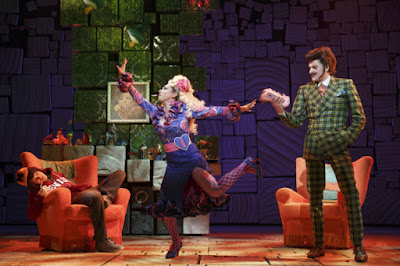 Click the "Show Reviews" tab above to see my full reviews of Kinky Boots (B+) and Matilda (A+).