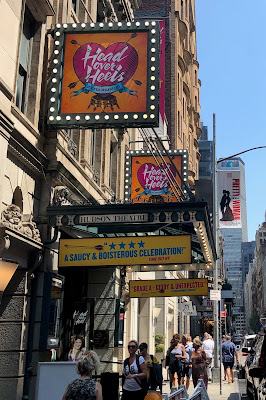 It's funny how art always seems to step up at just the right time to offer hope and to show the good in people. And it's a relief when this art comes along to makes us feel better - if only for a couple of hours. Such is the case with the exuberant, zany and ultimately life-affirming new musical, Head Over Heels.  On paper, it shouldn't work: a jukebox musical based on the catalog of an 80's pop-punk all-girl band, based on a really old play most people have never heard of, and spoken in Elizabethan/Shakespearean-style rhyming couplets. Add to that a directorial style of presentational vaudeville, choreography that recalls the last 20 years of gay club dance styles, and the entire sexual spectrum in a farce where Benny Hill would feel at home. Like I said, it shouldn't work, but it really, really does!

First of all, to simply lump this in with other jukebox musicals would be a mistake. The fact that the vast majority of audiences are unfamiliar with the majority of The Go-Go's music actually works in the show's favor. It causes you to pay closer attention to the lyrics, which, in turn, helps you realize that the songs really work in the story. Not to worry, the hits we all know are just as comfortably fit into the show.  Conceived and originally written by Jeff Whitty, and in turn, adapted by James Magruder the book is not just a silly romp, but a smart, fast-paced sex farce/journey tale, part Noises Off, part A Midsummer Night's Dream, and even part Into the Woods. It also offers a gentle (and not so gentle) lesson on inclusiveness, and even more audaciously in today's climate, a reminder that love and forgiveness will always win the day. Not bad for a jukebox musical, huh?

This weird but perfect melange of styles works largely because the entire company is on the same page, and they never hold back, a trait play-it-safe shows never have. Much of the credit for keeping this happy mess of ideas together goes to director Michael Mayer, who knows a thing or two about creating interesting combinations and successful shows out of unlikely sources (see Spring Awakening, American Idiot, et al). The purposely jarring juxtaposition of pop music with heightened Renaissance Faire play-acting only points up the craziness happening before your eyes. He has a clear vision -the old fashioned style of acting in front of the curtain while scenery is changed, direct address to the audience, along with the "thee"s and "thou"s of Renn Fest-speak, and the music video style of the numbers (not to mention the riotous shadow puppetry of sex revealed in the show-stopping "Heaven Is a Place on Earth") - shouldn't work, but he makes it work spectacularly, with an unrelenting sense of urgency and kick-up-your-heels revelry.  And speaking of those musical numbers, choreographer Spencer Liff creates  number after number of sassy good will, melding a variety of dance styles - everything from Elizabethan-esque partnering to classic Broadway jazz to vogueing and pop and lock. Stand out numbers include the opener, "We Got the Beat," the Fosse-lite "Cool Jerk," and the title number, which opens the second act.

The false proscenium and two dimensional set pieces set the tone of Julian Crouch's scenic design, which goes on to reveal surprise after colorful surprise. Kevin Adams once again brings his considerable arsenal of lighting skills and tricks to add joy to the entire production, as does the colorful cornucopia of clever costume designs by Arianne Phillips, who has a lot of fun tricks up her sleeves, too. As I said, everyone involved here is on the same page.

Then there is the acting company. Let's start with the amazing triple-threat ensemble, who fittingly, represent a wide range of humanity. They are limber, athletic, multi-talented dancers, all with a flare for the drama at hand. And did I mention they can sing? Boy, can they! They provide exciting and often gorgeous backing vocals throughout the show, which is frequently under the arrangement and supervision of Tom Kitt. (His work here, especially the "orchestrations," is his best work since American Idiot.)

So that I don't spoil the wonderful surprises of the story, I'll try to limit my descriptions going forward, but I apologize in advance for any spoilers. As page/confidant to the King of Arcadia, Tom Alan Robbins is a riot of nervous energy, with a spot on deadpan delivery and equally adept hysteria. The much discussed addition of Peppermint to the cast, as The Oracle of Delphi no less, is worth all of the generated press. Fierce and funny, she commands the stage no matter how she enters, and her delivery of "Vision of Nowness" is a creepy delight. Just as fierce in the exact opposite way is Taylor Iman Jones, who gets the party started with the thrilling opener "We Got the Beat," and her big production number, "Vacation," nearly stops the show. Add her to my list of stars I want to see in everything she does!

Broadway veterans Jeremy Kushnier and Rachel York are priceless as a pair of self-absorbed royals, on a collision course with a big life lesson they are about to be schooled on. Mr. Kushnier takes arrogance to a funny new level, and Ms. York remains a master of the sharp barb; their delivery is consistently on point and a sheer delight.

Alexandra Socha, as the "plain princess" is sweet and zesty (I'd love to see her as Catherine in Pippin), and she is wonderful to watch, even when she isn't the focus. She looks like she's having a great time, and her act one number, "Good Girl," is a highlight.

Two people in the show are making career defining performances here, one a Broadway newbie, the other a somewhat veteran. That newbie is the positively smashing Bonnie Milligan, who is everything you've read and heard about, and so much more. She's one of those people who you just know was born to be on stage. She is charming, alarming and an absolute joy to watch. Whether she's singing an ode to her own beauty or throwing an epic temper tantrum, she is a marvel of what comes off as spontaneity, and her line delivery is impeccable. The gal is going places and I can't wait to see more.

Then there is the geeky charm/sex on a stick combination of the remarkable Andrew Durand, who headlines a Broadway musical for the first time. He is more than up to the task. It is so much fun watching his character evolve from timid shepherd to Amazon queen (yes, you read that right) to self-confident hero. I loved his rendition of "Mad About You." But it is his presence and comic chops that really impressed me.

I'm guessing you can tell that I really loved this show. It takes "jukebox musicals" to a whole new level. If they were all this good, that term may not be such a "dirty word" to many theater fans. But trust me on this: this is the show we need right now - a feel good romp with a positive message. The Kingdom of Arcadia is what America should be. That would be truly great.