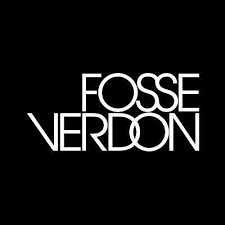 WARNING: THIS ARTICLE CONTAINS SPOILERS FOR THE FIRST THREE EPISODES OF THE SERIES.

I've had a thing for Bob Fosse and Gwen Verdon since almost the beginning of my lifelong love of musical theater. It all started with a framed copy of the original Broadway poster from Sweet Charity, a gift to my high school drama director from the cast of their production of the same show a couple of years before I arrived. I was so taken by the pose of Verdon - hip strut, knee bend, flexed foot...and the look on her face. I was smitten and had the cast recording the first Saturday after I saw it. Then we did Pippin. Immersed in the Fosse frame of mind, practicing our best jazz hands, life was all about The Manson Trio for 4 months.

So, you can imagine my reaction when Fosse/Verdon was announced. "Fan girling" doesn't even come close. So far, I'm happy to say I am thrilled with the result. Where to start? 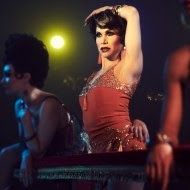 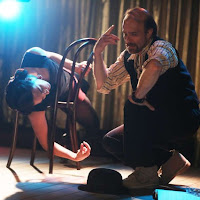 EPISODE #1: "Life is a Cabaret"
The nonlinear presentation of events heightens the drama and relieves the series of the burden of a documentary feel. Instead, while we see events depicted, Bobby and Gwen (and their host of famous friends and conquests) are treated like characters. In that sense, knowing anything at all about the subject isn't a requirement. That said, I can't imagine people not already interested in musicals, musical films or musical stars would enjoy this. Even so, there is a nice balance between plot and insider/meta moments. Of course, I loved the passing comment from Hal Prince about Company. And seeing them function in real world settings with the likes of Neil Simon and Cy Feuer is a treat for the theater geek in me.

Knowing that Fosse was a highly sexual, meticulous bastard of a genius who cheated on Verdon is one thing. Seeing it played out is another - and I don't mean in that All That Jazz kind of way. Somehow, even knowing this is a fictionalized/autobiographical hybrid, it fills in a lot of the blanks. As portrayed here, he's not really a bad guy - a bastard, sure, but not totally bad; she is not a victim exactly, either - I pity her, sure, but I admire her strength. 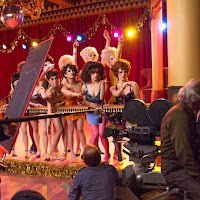 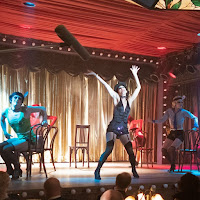 My favorite sequence has to be the entirety of the Cabaret filming of "Mein Heir," especially given Kelli Barrett's dynamic performance as Liza Minnelli. I also got a kick out of the canning of a dancer during the "filming" of Sweet Charity's "Big Spender."

EPISODE #2: "Who's Got the Pain?"
Here we see the juxtaposition of their break up with their first meeting over Damn Yankees. This works especially well with the "rehearsal" of the cat and mouse game that is "Whatever Lola Wants" paired with his seduction of her, and again when they get "stuck" and create "Who's Got the Pain?," a rather pointed parallel with their marital struggles. It works beautifully.  It's also a great way to introduce a recurring theme in his work and his life - using his signature style to save that day after a deep dive into self-loathing and paralyzing insecurity. 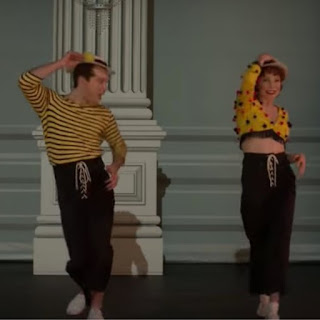 Of course, the evolution of this number is excellently recreated, and I know I'll never hear or see it the same way again.

EPISODE #3: "Me and My Baby"
There wasn't a lot of "performing" in this episode, but I really loved it. The opening tribute to his work on How to Succeed... to "Wilkommen" is so jarring it is inspired! The episode establishes a lot in the timeline. That new kid, Schwartz (Stephen), wants Fosse to talk him through his ideas for a new show called Pippin; Bob says he doesn't want to do it, but we know his need to save the day and fix "the horrible" show will win out. And we know how this turns out - nearly 2,000 Broadway performances! But can you imagine Gwen as Fastrada? (I can...) 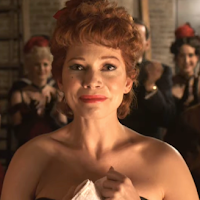 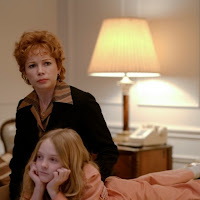 This is a decidedly Verdon-centric episode, and watching her struggle through her straight-play debut is painful to watch, and brilliantly acted. I suspect the problem wasn't Verdon entirely; Children! Children! closed on opening night. But the standout sequence here is when we find out why she freaks out when Nicole is left with Paddy Chayefsky (an amiable, slightly skeezy scene with Norbert Leo Butz). The little known shot gun wedding and son she had with James Henaghan (a cruel turn by Santino Fontana) and the harassment/rape that caused it explains so much about her insecurities and co-dependence.

Will they ever explain why that stop-the-show curtain call out of town during Can-Can was both a high and low point in Gwen's life?

I have plenty to say about Michelle Williams and Sam Rockwell. But that's for another time.