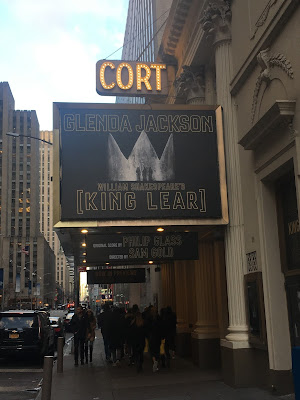 William Shakespeare's King Lear is one of my favorite of his plays, and it feels very contemporary in its current incarnation which opened last night on Broadway. This story of family greed and political manipulation is right out of today's headlines. And as the elderly head of state descends into madness... enough said. The play is provocative and upsetting as is, but the direction, design and performances are at once brilliant and troubling. This is a production you have to engage with - no passive sitting with this one. The one drawback to that is comfort. With a two hour running time for act one, the cramped, rigid seats at the Cort Theatre are not good. The physical (and mental) break that a second intermission would afford would go a long way to more enjoyment. I found myself mentally checking out off and on for the last half hour or so as I became acutely aware of how stiff my legs were getting. Not a good thing with a challenging play.


Had there been more to look at I might have been less easily distracted. Normally, I love the less is more approach to a play, and until now, I've really loved designer Miriam Buether's work. Here she has created a giant, nondescript box as a playing space, much like what she did for A Doll's House, Part 2, a less dense, less action packed, and much less lengthy play. That's not to say I don't get what she was going for. It is timeless and regal - I've never seen so much royal purple carpet in one place, and the sheer size of the gilded walls suggest both wealth and immense power. And it certainly allows for rapid change of scene. But, coupled with a mostly linear style of direction, it becomes almost distracting to stare at. A master of costume design, Ann Roth has dressed this with on point modern style - tuxedos for the royal men, haute couture for the royal ladies, and business suits for the underlings. Picture a soiree in the West Wing... But, again, after awhile this gets dull. Jane Cox's lighting gets the job done.

There's been a fair amount of online chatter regarding the score by Philip Glass. I found it to be appropriately moody and complex, just as notable for when it is played and when it isn't. The string quartet was wonderful and unobtrusive, despite early reports.

Also fodder for online bickering is Sam Gold's direction of this masterwork. He has created a few terrific symbolic moments, particularly with the use of huge tables that provide a visual for a divided kingdom that ultimately collapses. A royal sized wing back chair does double duty as a throne and a cliff-side boulder. Less effective is the too consistent use of horizontal, presentational staging. Gold has a lot of opportunity to mix it up - Lear doesn't lack for action. It gets old fast. Oddly, when the space is constricted during the storm scene, the horizontal nature of the staging actually amps up the tension.

I really respect his casting, a true melting pot of actors, without regard to gender, race or physical limitation. Especially effective is that each actor speaks with his/her/they own accent. This play may list England as its setting, but, as with the design, the goal here is an "everywhere." A welcome side effect of this is that the non-traditional casting doesn't feel in the least bit gimmicky or forced. It isn't that it is a woman playing King Lear, it is that Glenda Jackson is playing King Lear. Jackson's co-stars offer a variety of acting styles that manage to (mostly) coalesce. Of Lear's three daughters, Regan has the least to work with, and Aisling O'Sullivan doesn't make much out of it. She preens and looks snooty, but that's about it. Even her death is a snooze. More successful is Russell Harvard a deaf actor (Michael Arden is his translator) whose presence and expression makes up for any loss made by his lack of speaking; when he does scream in rage and despair, it is hair-raising.

This Goneril is extremely sexually charged, and Elizabeth Marvel handles the graphic nature of some of her scenes with skill, even as the audience cringes/gasps at her actions. John Douglas Thompson does fine, grounding work as Lear's confidante, the Earl of Kent. One of the "good guys," the character doesn't offer many juicy moments, but in a sea of crazy, his moral fortitude is welcome, and Thompson delivers. At first, Jane Houdyshell as Gloucester, was (and it pains me to say) a bit of a disappointment. She seemed unsure if she should just "be" or affect more traditional masculine mannerisms. But my disappointment was short-lived, for she was powerful and heartbreaking in the tragic eye gouging scene and its aftermath. As the wicked bastard son of Gloucester, Edmund, Pedro Pascal is sharp and vicious, though occasionally when he gets really manipulative he teeters on the edge of mustache-twirling villainy. But overall, he is good - his demise is very satisfying.

That Glenda Jackson is one of the greatest actors of all time is indisputable. But is she a good Lear? Yes. It is fun and frequently jaw-dropping to watch her go from haughty arrogance and nasty privilege to the pain and loss caused by the betrayal of loved ones. The final scenes of Lear's insanity leading to his death are both cathartic and disturbingly sad. What a delight to be in the presence of such skill. 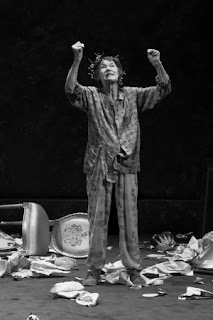 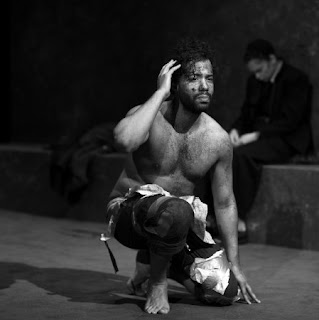 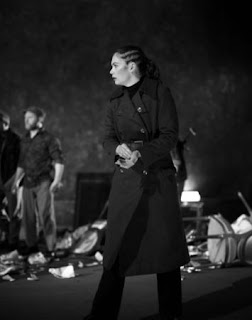 Jackson's name may be above the title, but for my money there are two stand out performances in this production. First, as the banished son of Gloucester, Edgar, Sean Carjaval is amazing. He is by turns brave, fiercely loyal, raving mad, disturbing and sad. You could feel his tortured soul all the way up to the ceiling. The physicality of his performance is equally brilliant. This is not normally a character one thinks of in regards to this play, but Mr. Carjaval simply shines. Hard to believe this is his Broadway debut. Then there is the thrilling performance of Ruth Wilson in the dual roles of Cordelia, the honest and banished daughter and the Fool, Lear's sidekick. Wilson is absolutely captivating as both the quiet, focused former royal and the boisterous, foul-mouthed speaker of truths. As with Carjaval, she uses brilliant physicality to convey as much emotion as her words do. The Fool demands that, but it is how she wordlessly rounds out her character of the daughter. When she is tragically reunited with her father, it is quite moving. I am already looking forward to seeing more of these two on stage in the near future.

Despite the very real physical pain caused by this production, I'm glad I persevered. It was three and a half hours well spent.