When I see Beetlejuice next month, it will be the 5th different show I've seen at the Winter Garden Theatre. I've been seeing shows on Broadway since 1983, and in that time, only six shows have played there. Wolf Hall is the only show I've missed there. I remember like it was yesterday the very first time I ever went to New York and walked down to Broadway from the Gershwin Theatre. The giant Cats billboard and the name of the theater below in twinkling lights. I was awestruck and immediately smitten. Life-changing.

This week's Friday 5 celebrates this wonderful theater and its famous marquee with night and day shots from the 5 shows I've been fortunate enough to see there.

1. Cats - 1983 It would be nearly 2 decades before I would get to see what the actual inside of the Winter Garden looked like, but it was worth it. Cats was a thrilling sensation. I think I saw it 4 times there. That I'll admit to, anyway...

2. Mamma Mia! - 2001 Another sensation followed Cats, another London smash featuring a score by one of my all-time favorite groups, ABBA. I saw Sophie's (really Donna's) wedding twice there, and an embarrassing number of times elsewhere.


3. Rocky - 2014 This is the show where I made my onstage debut at the Winter Garden. We splurged and got VIP seats 6th row center, which included onstage seating for Rocky's big bout with Apollo Creed. It was amazing and so much fun.


4. School of Rock - 2015 I was not alone in my surprise and delight at this show - especially Andrew Lloyd Webber's most fun score since Joseph... Every time I think of it, I smile. These days, that's a very good thing.


5. Beetlejuice - 2019 Will never having seen the movie be an advantage? People seem to either love or hate this. Looking forward to seeing for myself next month.  I'll let you know.


Vintage Bonus - Follies - 1971 One of the greatest musicals ever written started here 48 years ago as of a couple of weeks ago. I'll bet it was magnificent. 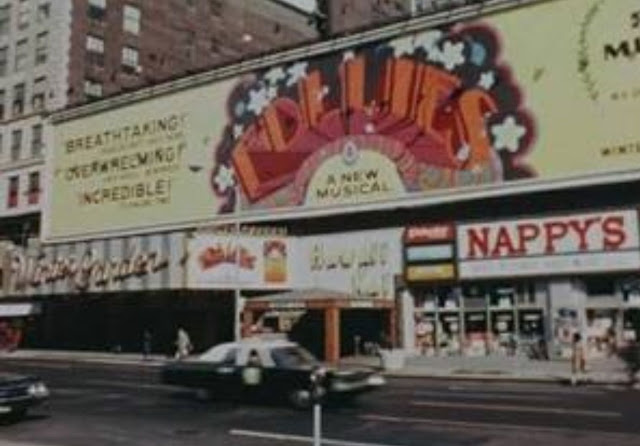