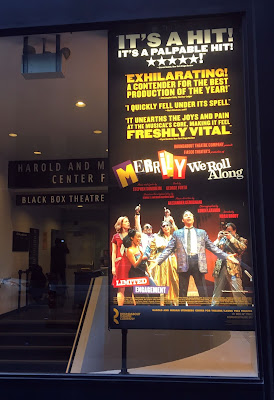 I have to wonder (and I know I'm not alone in this) if there will ever be a perfect production of Merrily We Roll Along. Being the good Sondheim fan that I am, I have a pretty decent knowledge of the continuing metamorphosis of this problematic piece. I don't think - and never really have - that the "how did we get there from here" device of the show is the problem. It isn't difficult to follow, and, in fact, it sometimes enhances the experience when you get to the occasional "ah ha" moment that explains something you've already seen. The problem is, I think, that we start out with the pretty unlikable characters at their worst. Each major production that comes along chips away at both problems, and the current Roundabout/Fiasco Theater off-Broadway mounting does just that.

In trimming it into a 105 minute, intermissionless performance, something had to go. Thankfully, all of the beautiful Sondheim songs are still there, but gone (by and large) are those singing interludes that turned back time for the audience. Instead, there are several very clever but succinct ways to let us know what the year is. And it works - less interruption, more focus - so kudos to director Noah Brody and choreographer Lorin Lattaro, for creativity that doesn't get in the way of itself. (I'd love to know how much rehearsal one of those changes took...). "The Blob" has a particularly eye-catching aesthetic, and this is the first time I've seen this number done where I didn't roll my eyes or dread that it was even included.  Both Brody and Lattaro create a richly detailed, yet virtually frills-free story in constant motion. Time flies here, even backwards. Similarly, Alexander Gemignani's orchestrations pare away any excess, and it mostly works. Occasionally, I wished for a fuller sound, and there were a couple times I didn't care for brief jazzier sections. 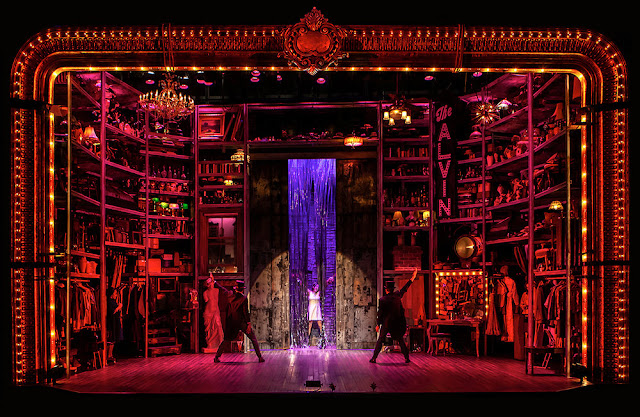 Technically, the show is aces with a wondrous unit set (by Derek McLane) full of theatricality - props, costumes and other Broadway ephemera span from floor to ceiling, suggesting a varied yet compartmentalized lifetime of memories. (The Alvin Theatre sign is a great touch, too.) Paloma Young does nice, appropriate work with the costumes, particularly in the way they all are quick changeable, and Christopher Akerlind's lighting manages to be simultaneously uber-theatrical and unobtrusive.

As is the norm with Fiasco shows, the cast is kept to a minimum number (in this case, a troupe of 6), and here, it really works well. The biggest benefit of the small cast is that it allows for a focus on what/who is really important. The actors who get to play multiple roles have more to do and they flex their acting muscles here with skill and finesse. Paul L. Coffey, who is primarily Joe, has fun with a variety of bit parts, as well as a scene added for this version, where he plays Beth's disapproving father. As Franklin's first wife, Beth, Brittany Bradford, gets perhaps the grounded serious arc, and she is very funny as an Oprah-esque talk show host. Emily Young, who gives a delicious portrait of insecurity wrapped up in a self-involved package as Gussie, also gets to play a variety of smaller roles, which she does exceptionally well. I look forward to seeing her again.

At its heart, and Merrily has one, this piece is a love triangle, with each point powered by different desires. Manu Narayan as Charlie is particularly effective at his angriest moments ("Franklin Shepard, Inc."), and later, at his happiest hopefulness ("Opening Doors"). I really enjoyed his performance. Mary is a tough role, and, while Jessie Austrian is not always the strongest singer, her acting more than makes up for it. I appreciate that early in the show, while she is biting, angry and wounded, she doesn't over do it. At the center of it all is Frank - played here by Ben Steinfeld - always a bit of enigma. Steinfeld is terrific - not the best sung Frank I've seen - but his flair for the dramatic is perfectly suited to the role, and he walks the emotional minefield with skill. All three are simply wonderful in the final moments and deliver an exquisite "Our Time." My record remains in tact - I'm 5 for 5 at being in tears with that song.