One only needs to look at the logo for Oklahoma! to recognize that this is not a typical production of the Rodgers and Hammerstein classic. I mean, take a look at the posters for the original production (left) and the 1980 revival (right): 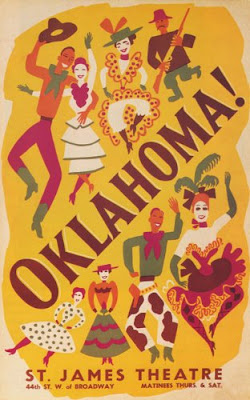 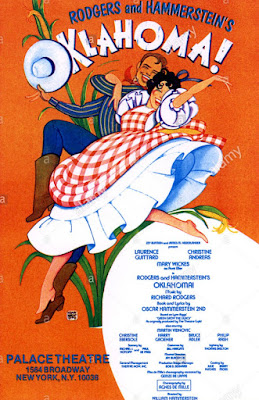 Now, take a look at the poster for the current acclaimed revival. 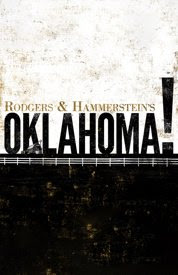 Stark. Bleak. Unyielding. Oh there's still the farm. Fenced in and dark, but the farm is there. The skies may not be cloudy, but they are severe and the whitewash is worn. Underneath is a classy, if harsh, gold. Perhaps classy isn't the right world. Classic. It doesn't get much more classic than Rodgers and Hammerstein. Still, there's something dangerous about that over-sized "!" Dangerous and frightening.

To me, that's a selling point. In fact, it actually enticed me to look into the show more. But to purists and many of the "older crowd," this is probably musical theater blasphemy. In short, it is polarizing. I suspect that's exactly what the production is going for. 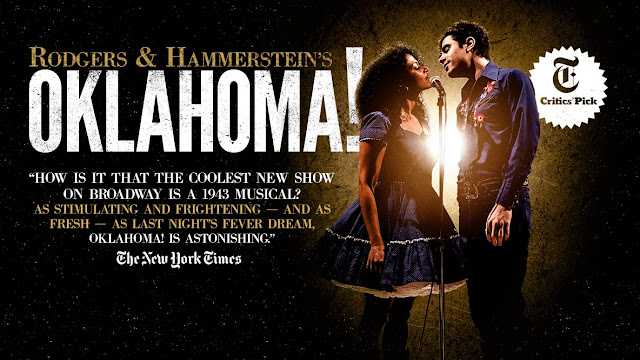 Perhaps it is wise that the latest iteration of the logo is somewhat warmer, including a photo from the show. It lightens things up just a touch, while it still shows the "cutting edginess" of the production - modern dress, non-traditional casting on full display. It has me excited to see the show.