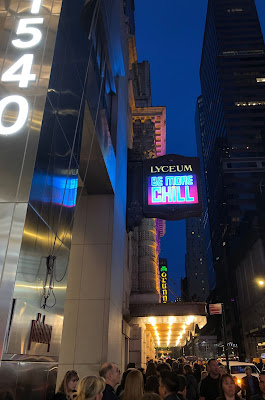 Theater is a collaborative art. It takes a lot of people to make it happen. And for all the right reasons, composer Joe Iconis has created a pretty tight-knit group of disciples. They are loyal collaborators, some of them having worked together for years, many of them on Be More Chill, his Broadway debut. In this day and age of self-promotion, self-absorption and just plain selfishness, this level of group spirit is refreshing. It would even be inspiring if the result of their efforts wasn't such a mess. The problem here isn't commitment, but rather a woefully apparent lack of objectivity. The whole thing feels like one big in-joke that only a certain clique understands.

What the show really needs is an objective editor. 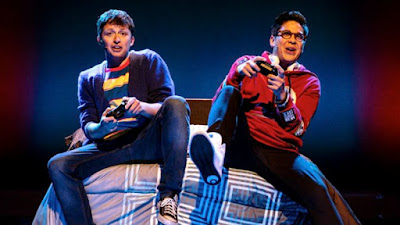 Oddly enough, it isn't Joe Tracz' book that needs the most trimming, it is really Iconis' work that needs a trim. A chorus or two less of each number might tighten things, and a grown up outsider to help beef up the grade level of the inane lyrics would greatly improve the experience for the whole audience. I also recognize that dressing an early 30's/late 20's cast to look like they resemble high school kids presents certain challenges, and even though this is hyper-reality, there is a point where excessive turns into ridiculous. Did anyone bother to tell costume designer Bobby Frederick Tilley II where that line is? I'm doubting it was director Steven Brackett, making his main stem debut. Did anyone tell him that every single moment of a show doesn't have to shouldn't be at level 10? Loud and frenzied does not equal quality, nor does it hide a lack of it.

Still, all is not lost. There are some grown ups in the room. Beowulf Boritt (set design) and Tyler Micoleau (lighting design) have created a really cool environment and the lighting effects are indeed truly impressive. Combined with Alex Basco Koch's inventive projections, the physical production really feels like you are inside a computer. 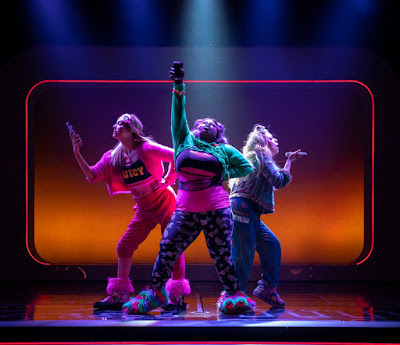 And then there is the cast, who must be exhausted by the end of each performance - I know I was tired just watching them. Even though I don't really care for the "page" they are on, at least they are all on the same one. Always a plus. That they are all seriously overacting is a given here, but they all seem to cancel each other out. Honestly, I liked everyone in the cast, with each being given moments to shine. Both Gerard Canonico and Britton Smith make the most of small but pivotal roles, even as they suffer the most unlikely of plot twists that try too hard to be "current." "The Smartphone Hour" is one of four really good songs in the show, and it gives the supporting ladies in the cast - Tiffany Mann, Katlyn Carlson and Lauren Marcus - some terrific material to work with. And they rise to the occasion. (I'd love to see them rumble with The Plastics or The Heathers.) In a myriad of roles, one has to wonder if Jason SweetTooth Williams really has a multiple personality disorder. He sure is sweet as a troubled, pants-challenged parent. 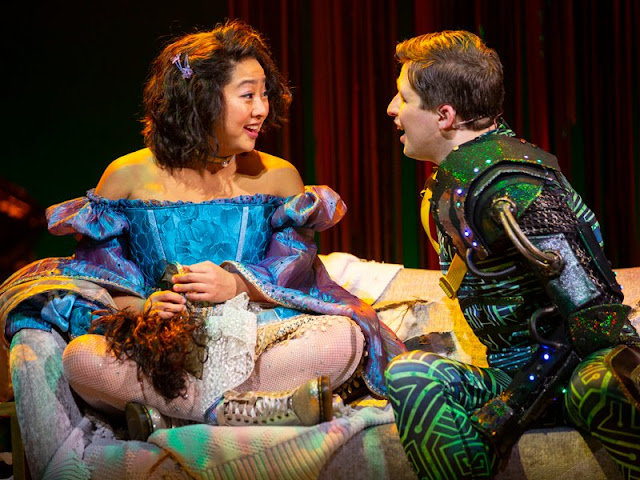 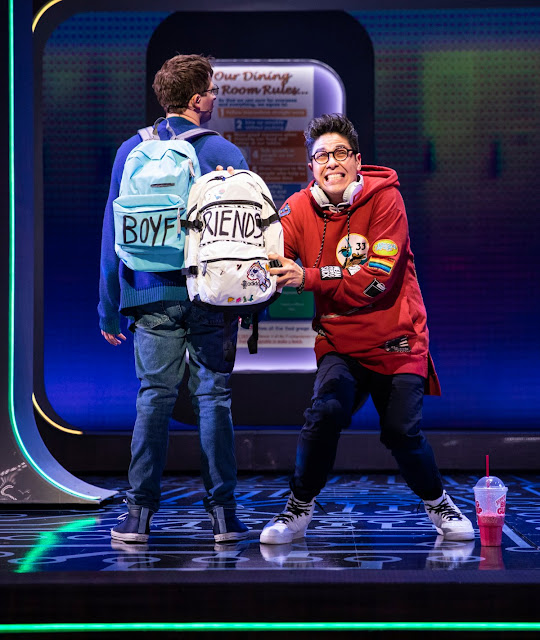 The four central characters had the most emotional effect on both Mike and me. Mike found much to love in the song that bears his name, "Michael in the Bathroom." And I could totally relate to "I Love Play Practice." Seems we both had our high school anxieties and insecurities, and these numbers were painfully on the nose. And seeing them performed with such endearing intensity by George Salazar and Stephanie Hsu, respectively...let's just say, tears were shed. Both are as guilty as the rest of overacting, but somehow, both make it work. Perhaps it's because they offer a nice counterpoint to Will Roland's (relatively) more grounded central portrayal. Roland is leagues better here than in last year's teen "it" show, Dear Evan Hansen. He brings a humanity to the well-worn geek trope, and he sings the hell out of the act one closer, "Loser Geek Whatever." (And he looks great in his Halloween costume...)

It shouldn't be a surprise that the best performance of the evening comes from the most experienced actor in the show, Jason Tam, who is mysterious, sexy as all get out, and all out villainous as The Squip - an embodiment of the nano computer swallowed to make the geek turn chic. Watching him evolve is one of the great pleasures of this production. He is captivating in all the right ways, especially when he executes Chase Brock's excellent techno-choreography. Where do I go to learn those hand movements? Seriously. Even The Squip's costumes are amazing as they become more and more computerized - kudos on this, Mr. Tilley! 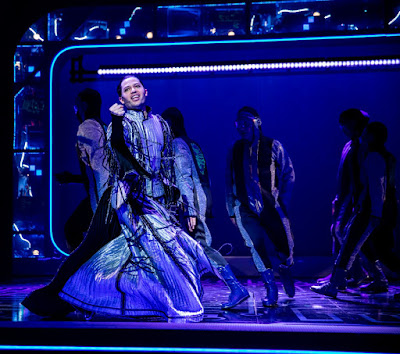 Clearly, had the rest of the show been as good as the material for the four main characters, this would have been outstanding. Truth be told, I can't say that I wouldn't have been tempted myself to get caught up in all of the hype that led to this Broadway run. I mean a bazillion downloads of a not-quite-regional cast recording, a trazillion pieces of fan art that explore every millisecond of a show most of the artists haven't even seen sure smells like a hit. Follow that with nearly instant sell-out of an off-Broadway run, and it would be stupid not to go bigger, right? So far so good - ticket sales are brisk and the audience screams are at such a decibel that the century old Lyceum Theatre's foundation may be in peril.

But...what is that saying about believing your own press?

Will this last? The middle school/early high school audience that this is aimed at is a fickle one. The next "big thing" is just around the corner and the shelf-life clock is ticking. How long will it take before these kids realize the BMC isn't much more than Mountain Dew injected Disney Channel movie with swearing. (For people who are older, read: After School Special on Jolt Cola with cuss words.) Funny that a simple, judicious editing pencil and a sincere attempt at going a little deeper would definitely add to its shelf life, and might even make the parents who will have to tag along feel better about the hundreds they have to shell out for this experience. One last thought: how long will it be before the fans realize they have been pandered to in the worst way? Excess has the staying power of a sugar rush.

Be More Chill would have been so much better if it were a lot more...chill.