CD REVIEW: The Will Rogers Follies 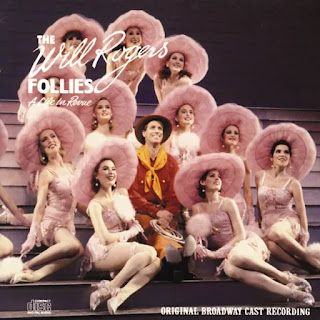 I recently revisited this blast from the past, and loved it so much I couldn't wait for another Throwback Thursday. So, I guess this is a Throwback Tuesday... Anyway, back in 1991, while everyone was enraptured by Miss Saigon, I was rooting for The Will Rogers Follies, a traditional, feel-good, Broadway extravaganza put together by masters of the musical at the top of their game. Stunning costumes, colorful sets - including a huge staircase as the centerpiece - and a wonderful company of actors/singers/dancers, starring Keith Carradine, Dee Hoty, Cady Huffman and Dick LaTessa. Not only did it win Best Musical, Tommy Tune won Tonys for direction and choreography. It also won Best Score, by Betty Comden and Adolph Green, lyrics and Cy Coleman, music.

That score was, fortunately, preserved in a very excellent Original Broadway Cast Recording. Even the big production numbers come off as exciting as seeing them performed. Just as in the show, the opening number, "Will-a-Mania" builds and builds, so that by the end of the track, you can sense the company welcoming Will Rogers making his entrance from a giant lasso descending from the rafters. And the big political rally number, "Favorite Son," made even more famous with its show-stopping appearance on the Tony Awards that year. It's almost as fun to listen to as it is to watch! "Presents for Mrs. Rogers" is a tribute to the fashion extravaganza numbers that were a hallmark of the real Ziegfeld Follies. What is wonderful here is that the music and lyrics evoke this stylish bit of theater history so brilliantly.

But the biggest assets to both the show and this recording are its stars, both of whom need to be back on Broadway SOON (please). Dee Hoty as Betty Rogers is sublime, and in great voice here. She manages to sound so modern and delightfully nostalgic all at once. "My Unknown Someone" and "Without You" are both gems. Of course, the main attraction here is the homespun wit and wisdom of Will Rogers as played by Keith Carradine. And he nails it. His voice is like honey as he croons such heartfelt songs as "Never Met a Man I Didn't Like" and the plea for respect for the Earth, "Look Around."

If you aren't familiar with this Tony-winning classic, this beautiful cast recording is a great place to start. And with its wry sense of humor toward everything from the press to the presidency to the environment, it is both refreshing and very present. Revival, anyone?