There are many things to enjoy about Beetlejuice, and the show's logo is one of them. This is especially true when it is used in conjunction with other aspects of its advertising.

It's primary feature is the black and white stripes resembling the title character's jacket, so it is appropriate. But does it work? Yes. It quickly draws your eye to it no matter what iteration you are seeing. The poster is especially appropriate in conveying the character, with its tie and lapels. I also love that his costume looks a lot like an old-time prison uniform - after all, Beetlejuice feels that he is a prisoner. 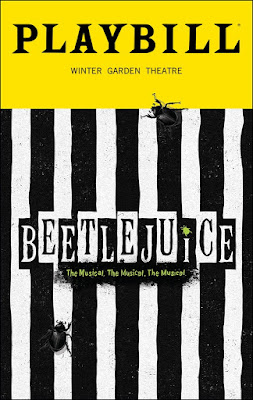 The font/typeface used for the title is terrific. It screams "netherworld!" doesn't it? I also love the squiggly-spooky lettering of the tagline. That tagline, by the way, is genius in its clever homage to the plot (and movie) and its funny send up of the now ubiquitous "the musical" found on almost all show logos. It is also the perfect deathly shade of green. So are those fun creepy crawly beetles, which have even over run the Playbill banner! 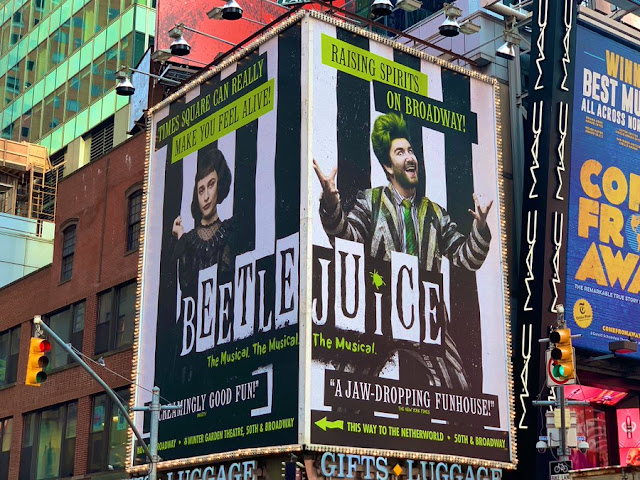 The logo looks fantastic on the outside of the Winter Garden Theatre, too. But I have to say that my favorite version of all is the new Times Square billboard, which merges the logo with funny catch phrases, reviews and character photos. It works three-fold: the logo catches your eye, the characters are recognizable if you know the film, but also convey what you are getting into if you don't know the film, and the pun-ny catchphrases make you laugh. The endorphin rush should make you follow the arrows right to the box office!