One That Got Away: Chess

The last article in this series (about Rags) got me to thinking about another musical that starred Judy Kuhn. I guess you could say Chess didn't exactly "get away" since I have seen it. My alma mater did this exact version, and I saw the concert with Adam Pascal, Josh Groban and Idina Menzel. Then there was the Signature Theater version with Jeremy Kushnier, Euan Morton and Jill Paice. Most recently, I saw the Kennedy Center staged concert with Bryce Pinkham, Raul Esparza, Ramin Karimloo, Ruthie Miles and Karen Olivo. I also have the London concept recording, the Original Broadway Cast Recording, and the Pascal/Groban/Menzel concert recording. 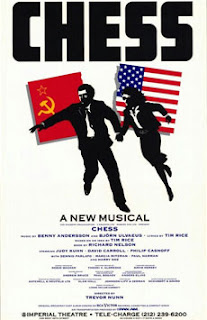 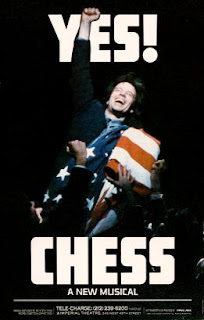 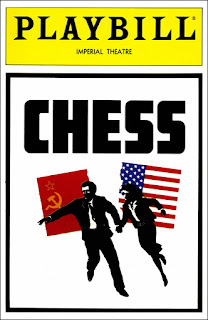 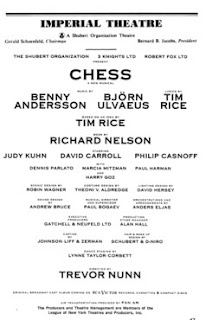 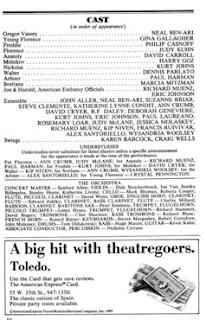 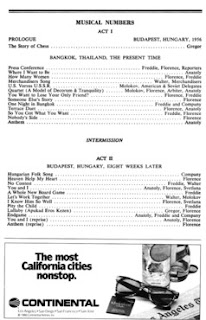 But... the Broadway production eluded me, and I really feel like I missed something. First of all, I would have loved to hear Ms. Kuhn sing "Someone Else's Story" live. It is one of my favorites. Second, I really regret missing David Carroll's emotional performance before his tragic death (I also missed his final role in Grand Hotel.) And finally, I wish I had been there to see just how much of a mess it really was. I'm betting it wasn't nearly as bad as reported.


Chess remains one of my all-time favorite scores. Benny Andersson and Björn Ulvaeus are genius composers, and Tim Rice is an equally genius composer. The story is interesting, and Trevor Nunn is one of the great directors. The theater lover in me would love to have witnessed all of this first hand to see why it didn't work. Of the versions I've seen, I enjoyed the book of the Kennedy Center version best. I still think there's a great show in there somewhere. Like so many Chess fans, I am waiting for the right combination and a revival that blows me away. I don't want this one to get away again.

Labels: Chess, One That Got Away