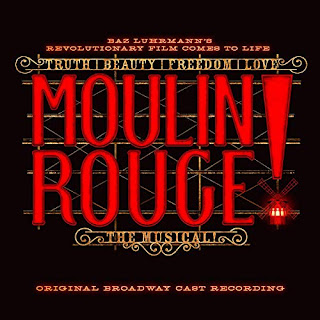 From the minute Moulin Rouge!: The Musical started when we saw the pre-Broadway run in Boston last year, I knew I needed a cast recording. Of course, that desired was tempered by concerns about how they could translate what was onstage onto a disc. Could it sound like that? Would the character and theatrical spin these pop tunes were getting work on a recording without the visual? Mostly, as with any jukebox musical, there's always the worry that the rights wouldn't be granted for a recording, or they'd be so costly songs would need to be trimmed or cut altogether.

Well, just as Moulin Rouge! takes the oft-scoffed (and oft-dismissed) jukebox musical to new heights, so too does its Original Broadway Cast Recording. It isn't just because it's new and fresh that I say this, it is just true: this is one of the most entertaining, high quality cast recordings to come along in ages. It hits all of my "fun Broadway show" buttons in a way that I haven't felt since the previous reigning jukebox champ, Mamma Mia! (Maybe it's the "!"?)

1. The quality of the packaging.
Like everything else MR!, the media imagery here has such a vivid, coherent aesthetic. What the booklet lacks (understandably) is lyrics, but, really, do you really need them? The booklet makes up for it with the sensuous photo stylings of Matthew Murphy, a full plot summary, and a liner note by Baz Luhrmann. It also gives full credit where credit is due: on the musicians. Not only are they listed in the centerfold, but there are song-by-song producer credits in the booklet, as well as a mini-poster that unfolds to reveal every songwriting credit for every included song. My favorite bonus is the picture of cast members donning the Bohemian ideals as tattoos.

2. The quality of the sound.
In a word: unforgettable. From the pulsating beat and notes that start "Lady Marmalade," all the way through the end of the "More More More" finale, the sound is so vibrant, so present that it feels like you are hearing a live right in front of you performance. One nice thing about hearing this without seeing the show at the same time is the ability to concentrate on the orchestrations (Katie Kresek, Charlie Rosen, Matt Stine, with dance arrangements by Justin Levine, Matt Stine and Cian McCarthy, who also musical directs) which are a character in and of themselves. Every time I listen to it, I get more out of it.


3. The quality of the performances.
Each cast member is on fire here, not just the leading roles. In fact, many of the highlights of the disc include the entire company, like "Welcome to the Moulin Rouge" opening sequence, the blistering thrill ride that is "Backstage Romance" (aka the "Bad Romance"/"Toxic" mash-up), and the "More More More" encore. Then there is the character work by Sahr Ngaujeh, Ricky Rojas and the woefully underused (as in the show) Tam Mutu. The presence of Danny Burstein pours out of the speakers; every second of his preserved performance is at once brave, creepy and oddly welcoming. He is the perfect master of ceremonies - decadent and ingratiating. But the stars of the recording, as in the show, are Karen Olivo and Aaron Tveit. He has never sounded better, and she tears through her numbers like a supreme diva at the Met. She is utterly brilliant in "Firework," surpassing the original by a mile. And his "Crazy Rolling" mash-up is probably my favorite track.


Like many of you, the jukebox musical genre is wearing a little thin for me. But the plain truth is that Moulin Rouge! has re-invigorated what was once tired. It proves that no matter what, if you craft an entertaining, well-constructed show, the genre doesn't really matter. Spectacular, spectacular indeed!