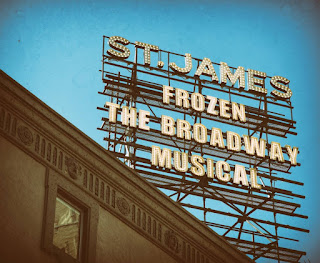 You may need to use scratch paper to play this week's Broadway Game. This week's game asks you to use letters from the answers to each clue to figure out a "Blended Broadway Marquee!"
Broadway Games:
A Blended Marquee Jumble
The Jujamcyn Group needs to change the letters on the marquee atop the St. James Theatre. (RIP Frozen...) But the workers forgot the name of the new musical to open there in 2021. They couldn't remember if it is a brand new, trippy musical or a revival of a Tony-winning show. So what did they do? Blended the title and got out of there before Jordan Roth saw it!
ON THE MARQUEE:
⎹⎹⎹⎹⎹⎹     ⎹⎹⎹⎹
⎹⎹⎹⎹⎹⎹     ⎹⎹⎹⎹⎹⎹⎹⎹⎹
CLUES: Each box is one letter. Each box that is orange represents a letter that belongs on the marquee above.  Good luck!
1. The original Spider Woman: ⎹⎹⎹⎹⎹   ⎹⎹⎹⎹⎹⎹
2. The musical Pygmalion:  ⎹⎹   ⎹⎹⎹⎹   ⎹⎹⎹⎹
3. He plays Tony: ⎹⎹⎹⎹⎹   ⎹⎹⎹⎹⎹⎹
4. Where Peter Pan lives: ⎹⎹⎹⎹⎹⎹⎹⎹⎹
5. She a sparkling diamond at the Moulin Rouge!: ⎹⎹⎹⎹⎹⎹
6. The Stage Manager narrates this classic play: ⎹⎹⎹   ⎹⎹⎹⎹
7. Real life Funny Girl: ⎹⎹⎹⎹⎹   ⎹⎹⎹⎹⎹
8. The Go-Go's Musical: ⎹⎹⎹⎹   ⎹⎹⎹⎹   ⎹⎹⎹⎹⎹
9. Oh, those summer nights!: ⎹⎹⎹⎹⎹⎹
10. This classic musical has real ups and downs: ⎹⎹⎹⎹⎹⎹⎹⎹
***     ***     ***     ***     ***
ANSWERS TO LAST WEEK'S
SIX DEGREES OF BROADWAY SEPARATION
1. Once on This Island (2017) to If/Then
Michael Arden directed Once on This Island and the revival of Spring Awakening which featured Ali Stroker who was also in Oklahoma! which featured Mary Testa who was in Xanadu, directed by Christopher Ashley who also helmed Come From Away which featured Jenn Colella who was also in If/Then.
2. Head Over Heels to The Gershwins' Porgy and Bess (2012)
Both Head Over Heels and American Idiot were directed by Michael Mayer; both American Idiot and Bullets Over Broadway played at the St. James Theater; both Bullets Over Broadway and Contact featured Karen Ziemba and direction/choreography by Susan Stroman who also choreographed Crazy For You which featured a score by George and Ira Gershwin who wrote Porgy and Bess.
3. Cats (1982) to Harry Potter and the Cursed Child
Cats and Starlight Express shared many things in common, like set designer John Napier, while both Starlight Express and Grand Hotel featured Jane Krakowski and Tommy Tune's direction and choreography, which he also did for The Will Rogers Follies; The Will Rogers Follies starred Keith Carradine, who also starred in Hands on a Hardbody which had its set designed by Christine Jones who also designed Harry Potter and the Cursed Child.
#2356
Posted by JK at 7:00 AM