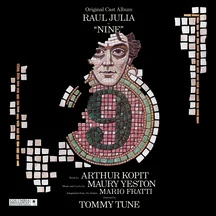 A couple of weeks ago, I talked about the musical Nine, one that got away from me (HERE), brought to mind when I rediscovered my copy of the OBCR in my vinyl collection. Well, I cranked up my turntable and finally listened to it all the way through. This is what I though of it.
The Tony-winning score by Maury Yeston is beautiful, and his choral arrangements are stunning. Jonathan Tunick created yet another masterpiece of orchestrations. Yet, for all of its lush complexity, much of the score comes off as somehow one note. While its operatic leanings are an accomplishment for sure, no matter how well rendered they are, they feel inaccessible. That's not to say there aren't some delights. The epic "Folies Bergeres" is fun to imagine seeing, and you can't beat the rousing "Be Italian." I especially enjoyed the all-too-brief "Movie Themes."
I am more than willing to concede that I might enjoy the whole thing much more had I seen the show. Knowing, as I do, the joys of Tommy Tune stagings, I'm positive that there are many visuals going on during each number. I mean all one has to do is look at the impressive white tile spa setting and the bevy of black-clad women staged all over it to know that the possibilities are endless. (Set by Lawrence Miller, costumes by William Ivey Long.)
There is a long standing rivalry (is that the right word?) between Nine and Dreamgirls, the former the Best Musical/Best Director winner vs the latter  a mega hit runner up. I have seen Dreamgirls several times, and can totally understand the confusion as to why it lost out. It is a brilliantly staged adrenaline rush. Its score is easily accessible and full of memorable songs. The vocalists are top notch, and even on just the recording you can sense what they are doing. In short, the Dreamgirls score is everything the Nine score is not. 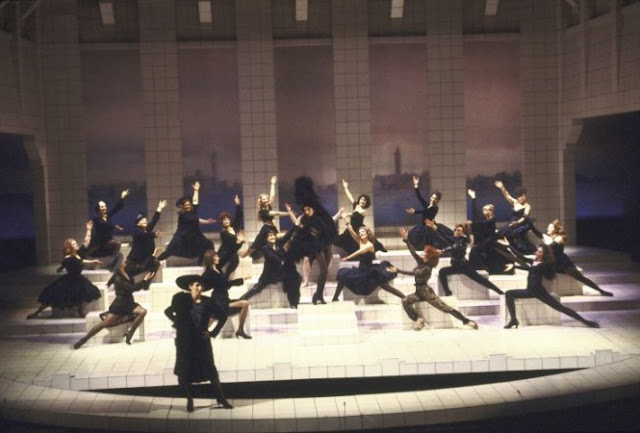 Nine's cast recording is a reminder of Broadway musicals that valued character acting/singing over smooth vocal stylings. Let's be honest, Raul Julia was a brilliant actor. His singing ability was marginal. Even Karen Aker's notorious voice sounds thin here. And one must assume that Anita Morris' black lace body suit dazzled so much that no one listened to her sing with a critical ear. Again, I have to believe that seeing the show would make it all make sense.
The Original Broadway Cast Recording of Nine will never be a favorite; I probably won't listen to it all the way through ever again. But I won't dismiss it, either. File this one under "scores I appreciate, but don't really like."
Grade: C
#2369
Posted by JK at 12:48 PM