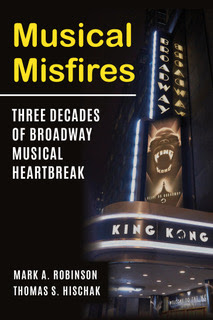 Review of Broadway Misfires: Three Decades of Broadway Musical Heartbreak by Mark A. Robinson and Thomas S. Hischak. BookBaby, Publishers. © 2020. 757 pages, including sections of production photos.
Grade: A
I don't know what it says about me as a theater-goer that in a book about Broadway flops over the past 30 years, I've seen 95 of the 151 titles discussed in Broadway Misfires. Of those 95, I can name only a very few that offer zero positive memories; I love flops. This book is squarely in my wheelhouse. And I am grateful to authors Mark A. Robinson and Thomas S. Hischak for their efforts, adding solid work to the legacy of other such books as the seminal Not Since 'Carrie.'
From the introduction, it is easy to see that they have the same affinity for musicals that I have. There, they seek to redefine what we have previously referred to as a "flop," recognizing that many shows may fail to return their investments, but still have much to offer in the rich, ever-growing history of the Broadway musical. "We have chosen the phrase “musical misfires” to encompass a wide-range of musicals that have opened on Broadway since 1989 that, for one reason or another, failed to meet all three components of that essential trifecta: audience acceptance, critical approval, and financial success." I think, going forward, I will use this term.
An entire chapter is devoted to the quintessence of misfires, Nick and Nora, beginning with a statistical account of the creative team, the principal cast, awards recognition, and performance information. What follows is an account of the show's gestation, a detailed plot summary, its preview period, and its critical reception. Like many theater fans, my entire exposure to this show is through its cast recording and legendary hearsay. It is great to have it all in one place.
The other 150 titles follow the same format, though with considerably less time spent on fully detailed summaries. The shows are grouped, more or less, into thematic chapters, including two sections on movie-to-stage properties, family-friendly shows, unusual shows, bio-musicals, jukebox titles, and probably my favorite chapter on "horror" musicals. The book ends with a thoughtful chapter on the shutdown due to COVID-19, and how the Broadway community has once again come together in this time of need. 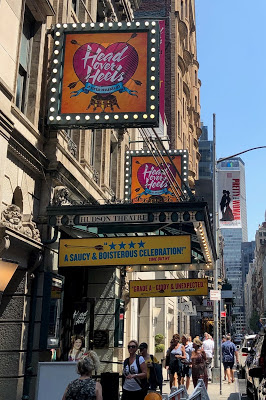 This otherwise excellent volume (so far only available as an ebook) is not flawless. There are several typos - spelling, missing words - and a few factual errors. For example, Frozen was nominated for 3 Tony Awards, not 1, and Head Over Heels ran for 188 performances, not 164. And, while the movie-to-stage coverage is probably worth even more space than is already given, I'm not clear as to why they divided them into three sections, the differences between the three being hardly different from each other.
Chapter 2, for example, covers musicals that didn't match the success of their film counterparts. Aren't all of these misfires musicals that failed to repeat the films' success? Chapter 3 discusses shows that were basically recreated on the stage, yet the parts devoted to High Society and Xanadu both go into detail about how each are not like their respective films. Finally, Chapter 4, offers discussions big name films that were unsuccessful as musicals. Was High Fidelity really a success on par with Pretty Woman or Big in Hollywood?
Finally, I appreciate that this book rarely veers into editorial prose. For the most part, the authors' personal feelings about any given show are largely absent. This work portends to being a scholarly reference work, providing factual details, comprehensive summaries, and judiciously chosen critical quotes. That said, their reverence for the topic is always evident, and only occasionally do they indulge "fan bias." I agree, though: The Visit deserves a much bigger history, and Tuck Everlasting is a pretty great show!
I hope this is eventually a published work as a bound volume. I look forward to putting it on my reference shelf next to Not Since 'Carrie.'.
📸 courtesy of Mark A. Robinson, J. Kyler
#2408
Posted by JK at 7:00 AM