As we continue to wait for Broadway to reopen, at least one show is being proactive. As you are no doubt aware, Diana has taken the bold and unusual step of doing a professionally shot film version of the show before it opens on Broadway, and still plans to open next spring. It's pretty brave. But frankly, I'm here for it.

So today we take a closer look at the new musical's logo. What does it say about the show's subject? The show itself? As logos go, is it successful?
From a color standpoint, I think the logo does a fine job. Primarily white, it is easily eye-catching, especially, one would think, when lit up at night. The choice of white also speaks to the near heavenly regard much of the public has for its subject matter. And the deep royal blue chosen for its wording and iconography is perfectly, well, royal.

Design-wise the logo is striking, too. It is simple, straightforward, and instantly recognizable. Uncluttered is elegant, and the late Princess was the very definition of elegant. Anyone who has even passing knowledge of the woman will recognize those eyes - alive, hopeful and just a little sad. 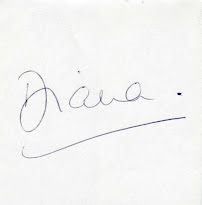 Using a logo-fied version of Princess Diana's signature is a loving touch that also gives the whole thing an air of authenticity. (Notice how the dot over the "i" resembles a crown.) The austere tagline "A True Musical Story" also lets perspective audience members know that a serious, reverent take on her life story is being made here.
How well-received the show will be with audiences, critics and royal watchers alike remains to be seen. But the logo is a winner.
#2403
Posted by JK at 7:00 AM