Like most of us that are into the theater scene, we, too, are craving anything that could possibly count as new content. Which brings us to the installation of a new marquee for a new Broadway show - the new revival of The Music Man. Today, we'll share a few thoughts about that marquee and the logo itself.
As The Music Man celebrates (and slyly skewers) antiquated Americana, the feel of the complete logo is spot on, from its old-fashioned font, its sepia tinged coloring, and its use of antique iconography. The whole thing feels positively 1912! The details are actually quite amazing. Put together, they take us back in a comfortable way.  Of course, like the show itself, it is remarkable how there are subversive digs at the gullibility of Americans to be taken in by a trickster who knows how to exploit his next pigeons. (Sound familiar?) Including an "ad" for the music man's services is spot on. In short, I think the whole package is pretty terrific. Below, I've pieced together all of their logo pieces for you: 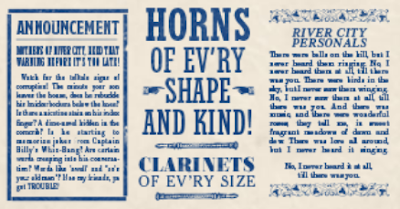 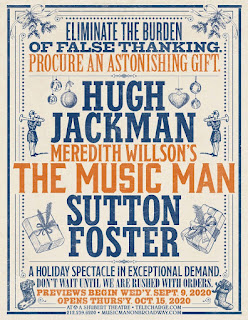 But the "whole package" is also a problem in terms of advertising. In order to catch the full power of this logo, you really have to look closely at it. Really close. Who has the time to do this while walking down Broadway? Is the gentle color pallet enough to make one stop or even give it more than a passing glance? The "whole package" is great when you have it to hold onto, say as a poster, Playbill or souvenir program. But as an inducement to buy (expensive) tickets. COVID may have changed the way the game is played, so just the title alone may be an inducement for those craving cheery Americana. I guess we won't know for awhile. But if traditional logos/advertising rules will continue to hold after all of this, I'm not entirely sold on it.
Then there's the marquee at the Winter Garden Theatre. As a whole, I think it's quite attractive. But I'm not sure I understand the set up. The only way to see what show is playing there is to be across the street and looking at the building directly. Who thought putting two names on the signage that you can see from the sidewalk or in passing traffic was a good idea? First, are you selling the stars or the show? What happens when one or both are out? What happens to any possible sales from people who don't know much about Broadway, but might know the title? Second, what happens when one or both leave the show? If the show is well done, why shouldn't it continue to run? Most, if not all, of the longest running shows are long runners because the show is good, no matter who is in it. 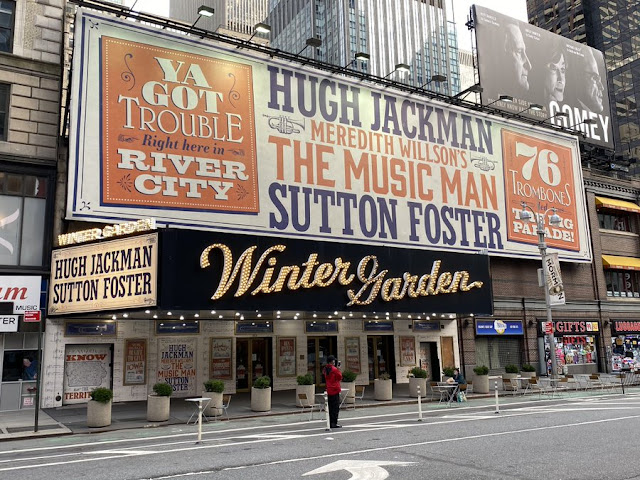 But, like I said at the top, anything new is cause for hope and excitement. That sentiment is shared by my Twitter buddy, @broadwaybobnyc, who graciously shared the above photo. And as a person who actually saw it in person, he offers this take on it: "Honestly, I teared up a bit both from happiness at the marquee’s optimism and sadness at the current state of Broadway. I give them great credit for giving us something to looking forward to and lighting up those beloved Winter Garden lights."
Optimism and sadness - I agree. Let's stick with optimism. We need it now more than ever.
#2423
Posted by JK at 1:24 PM