Today, we continue our new series, Best Songs From Best Scores, in which we take a look at the numbers from a season's Best Original Score Tony nominees. Of course, "best" is in the eye ear of the beholder, and we are pretty sure you won't always agree with our choices. So, please feel free to let us know what you think via email or Twitter!
This time, we decided to look at the 1989 - 1990 season, which included two shows really in need of a first class Broadway revival. The others were a less-than-successful Andrew Lloyd Webber opera and a splashy (if unnecessary) musicalization of a beloved movie musical. Some thirty-two years later, each one holds up pretty well, and there are many worthy songs to consider. Here are the ones we like the best:
Best Songs From Best Scores
1989 - 1990

Nominee: Meet Me In St. Louis
Music and lyrics by Hugh Martin and Ralph Blane
Best Song: Act One Closer: "The Trolley Song" - Esther and the Ensemble
One of several classic tunes in the score, this was a showstopper, including a moving trolley and a boisterous ensemble. But let's face it, anyone who sang this song would pale in comparison to Judy Garland, but damn if Donna Kane didn't give her a run for the money! I still remember the goose bumps I got when she belted that last note, "at the end of the liiiiiiinnnneee!" It's a classic for a reason. 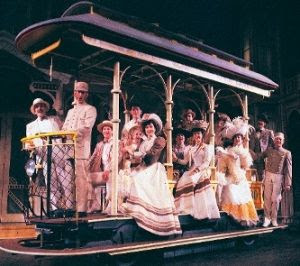 Nominee: Grand Hotel: The Musical
Music and lyrics by George Forrest, Maury Yeston and Robert Wright
Best Song: Dance Number: "We'll Take a Glass Together" - Otto Kingelein, Baron Felix von Gaigern and Company
In a show that was literally non-stop movement, there were several standout dance numbers, this one really stopped the show cold. A dying Otto is living out his last days in high style with his cashed-in insurance money and meets the Baron, really a cat burglar with his eye on Otto's wallet. This ode to joyous excess brings each to a life-changing epiphany, and the audience to screams of delight. One of the great numbers ever. 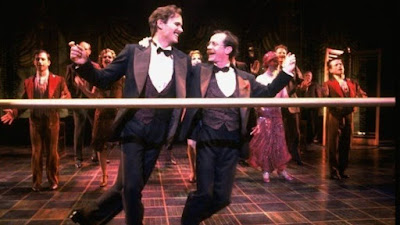 David Carroll, Michael Jeter and Company
Best Song: Character Number: "I Want to Go to Hollywood" - Flaemmchen
Talk about emotional! This "I Want" song is part jazzy Charleston, part terrifying memory play. Flawlessly sung and danced by all five different people I saw do the role, I was tapping my toes and wiping away tears at the same time! 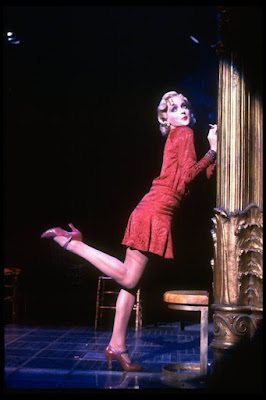 Nominee: Aspects of Love
Music by Andrew Lloyd Webber and lyrics by Charles Hart and Don Black
Best Song: Rousing Number: "Hand Me the Wine and the Dice" - Giullietta, Rose and Company
I've since come to really enjoy and appreciated this under-appreciated gem. I still maintain that what they did with "Love Changes Everything" for the Tony Awards that year was a vast improvement over how it is done in the show. But I was immediately smitten with this catchy and thrilling number. A celebration of life, love and taking chances, this song is gloriously sung following a significant death. What a tribute! 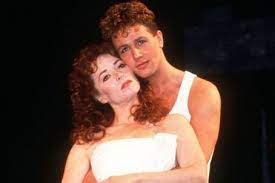 WINNER: City of Angels
Music by Cy Coleman and lyrics by David Zippel
Best Song: Duet: "What You Don't Know About Women" - Gabby and Oolie
With a jazzy score that is superb from overture to walk-out music, there isn't a weak number in the bunch. This sharp as a tack and venomous argument against men is full of exciting wordplay that had the audience holding its collective breath so as not to miss a single word. That final crescendo of words was met with thunderous applause. 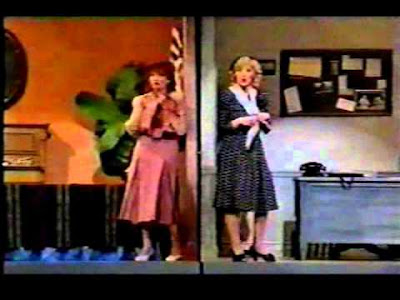 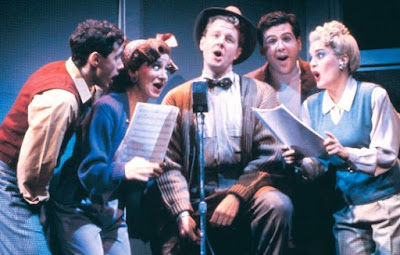 Scott Waara and The Angel City 4
Best Song: End Credits (Walk-out Music): "The Theme from City of Angels" - Jimmy Powers and the Angel City 4/Orchestra
In the theater, this was the music the orchestra played as the audience left. On the cast recording, it is included with full lyrics. And those lyrics are a doozie! As sharp and funny as anything in the rest of the score, it nails that film noir/40's detective feel. It starts with "You only go around once, and then they tuck you in with a spade," and only gets better from there. I hope that when they finally get around to reviving this wonder work, the powers that be include this number as more than walk-out underscoring.
Posted by JK at 7:00 AM