This week’s entry is about the 1961 Original Broadway Cast Recording of How to Succeed in Business Without Really Trying. 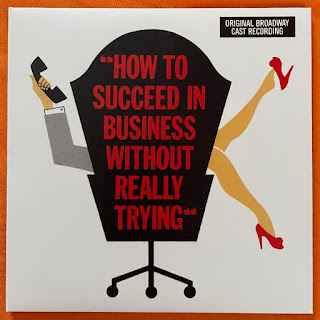 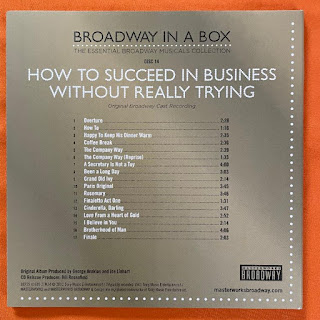 I am a fan of How to Succeed as a stage show, but I try to approach each CD in the collection as a new thing unto itself rather than a secondary version of something else (that I may or may not be familiar with). In this case, that’s an extremely rewarding approach, because this CD is probably the best of the bunch so far. In this review I’ll run through some of the reasons why this one stands so tall on its own as a cast recording.

First, the sound of the recording is astonishingly good. Even on the little boom box in my bedroom, every word is perfectly clear. The balance is also perfect: voices are given extra prominence when they need it, but they never drown out the orchestra (or each other). I was not at all surprised to learn that this flawlessly engineered recording won the Grammy Award for Best Cast Show Album.

Beyond the technical achievement, this is also a show that, to a large extent, can be understood and appreciated by way of the songs alone. How to Succeed, of course, boasts a wonderfully satirical book with some hilarious dialogue, but the broad developments of the characters and their relationships - if not all of the details - can readily be tracked by listening to these carefully crafted Frank Loesser songs. Focusing on the romantic leads, Finch and Rosemary, we start out with a vivid “I Want” song for each of them (“How to Succeed” and “Happy to Keep His Dinner Warm”), then trace their relationship through dating (“Been a Long Day”), falling in love (“Rosemary”), and possible joint world-conquest (the finale version of “I Believe in You”).

The songs are also just very enjoyable on their own. Typical of a Loesser score, there’s a lot of variety, including the jaunty title number, the smarmy big-band sound of “The Company Way,” and the operatic heights of “Rosemary.” There are also some vividly designed comic numbers that stand on their own without any visuals, like the back-and-forth perspective of “Been a Long Day” and the absurd comedy of “Paris Original” - which comes across perfectly well on the recording without benefit of the funny stage joke that accompanies it. 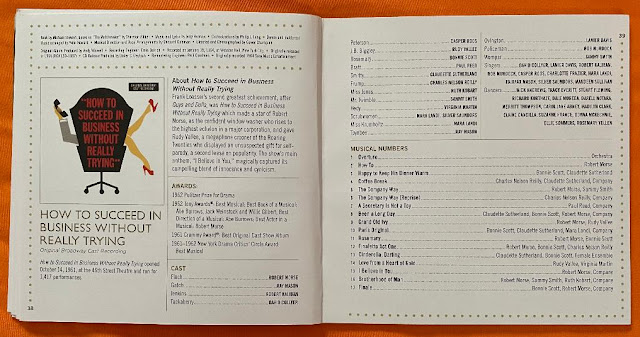 This recording is also made particularly enjoyable - and comprehensible - by the casting of very different voices for all of the main characters, each of them perfectly suited to their respective roles. Robert Morse, as Finch, with a slightly thin voice, comes across as apparently shallow but lovable (this would seem to be Morse’s stock in trade). Bonnie Scott’s soprano voice is a touch more “comic” than some other romantic leads in classic musicals; her Rosemary is alluring but down to earth. The other characters are basically comic background, but each makes a unique impression: Charles Nelson Reilly as a ridiculous Frump; Claudette Sutherland as a sweet Smitty; Rudy Vallee as an imperious Biggley; and Virginia Martin in the funny (but admittedly somewhat trite) role of Hedy LaRue.

Finally, although the show itself enjoyed a first-class revival fairly recently, it strikes me that its caustic themes of romantic and professional exploitation (to use modern terminology) are even more current and vital now than they were a few years ago. A director in 2022 would have to be very careful, on the one hand, to cast a white-hot spotlight on the satirical nature of songs like “Brotherhood of Man,” and, on the other hand, to prevent a song like “A Secretary is Not a Toy” from trivializing what we now realize is a sickening phenomenon in many workplaces. I wonder if Diane Paulus, who has a track record of making decades-old classics seem new and vital, might be interested.

Next up is the Original Broadway Cast Recording of Into the Woods.

One of my all-time favorite shows! Thanks, Mike. Looking forward to your thoughts on another favorite next week! --Jeff

Labels: Broadway in a Box, CD Collection, CD review, How to Succeed