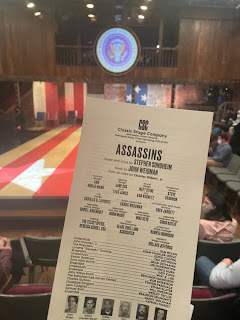 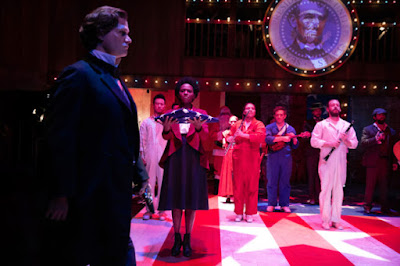 When we arrived at the Classic Stage Company theater, we were told to wait in line outside. Typical, until it got to be 1:45, and they wouldn't even let us in to pick up will call tickets. Then a Tweet from Judy Kuhn came where she announced she had Covid and would not be appearing in the show that day. Would the show even happen at all? At last, the line moved, and we got inside. We sat. We waited. Eventually, some of the actors appeared and were milling around, but looking... edgy. Now it was after 2:15 and the show still hadn't begun. Finally, the lights dimmed and the music started.
Well, it took 32 years and three productions for me to finally see a New York production of Assassins, and boy, was it worth the wait. I rarely say this about any production - even my beloved favorites, but this revival was flawless. From the design to the casting to the John Doyle concept and direction it was utter perfection. A difficult, uncompromising and, yes, terrifying piece to begin with, this production made the show feel both timeless and eerily timely. Never before has it struck me so hard that we live in such a precarious balance between the seen and the unseen, the heard and the unheard. 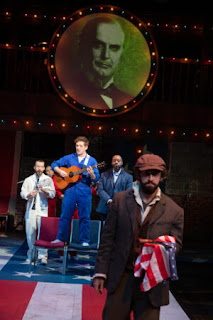 In the current social media age where anyone and everyone says and does whatever they have to to be recognized - where everyone who wants a platform can have one - it is a real gut-punch when you realize that despite all of that (or even scarier because of all that) people are still desperate to be heard and to get their "fucking prize." Have we ever been so close to a mass assassination before? Those questions and more are posed by this production, be it with Steve Channon's projections, or the frightening use of face masks as the company dons them to blend in with the rest of us. Here, industrial brick walls and steel beams collide with rustic barn style wood, and a sickening side show/carnival of red, white and blue lights beckons and warns of danger and risk. Doyle's stage design and the lighting created by Jane Cox and Tess James trap all of us - citizens and assassins alike - inside a surreal version of Americana. It chills me even as I write this, some days after being a part of it all. And, yes, I mean "a part of it all." The elements are so intertwined that the audience - American and not - are all a party to what is revealed.
The quadruple threat ensemblists (Brad Giovanine, Whit K. Lee, Rob Morrison and Katrina Yaukey) not only play instruments, but participate in a variety of roles and are as integral to the storytelling as any of the main characters, and in this version, they represent the "everyman" American quite well. This production also makes great use of the actors who play the proprietor (Eddie Cooper) and Emma Goldman (Bianca Horn) - both excellent in those roles, and a variety of others. 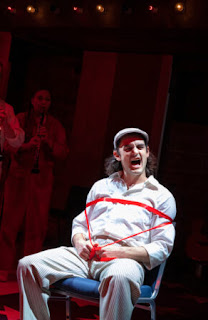 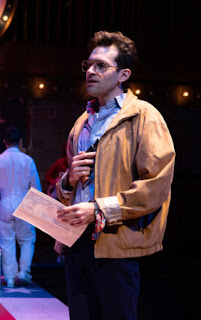 In the featured roles of Zangara and Hinckley, Jr., Wesley Taylor and Adam Chanler-Berat, respectively, excel at the odd quirks of their characters and exude an intensity that lingers as it permeates the room. Lee Harrington, rumored to be playing Sara Jane Moore for the very first time, was truly excellent; funny and scattered, she also gave a sobering hint that that can be a lethal combination not to be dismissed. As demented Santa suit-wearing Samuel Byck, Danny Wolohan delivered his multiple monologues with ever-increasing fervor. And Brandon Uranowitz's sullen turn as immigrant Leon Czolgosz gave a glimpse of the intersection of two major issues in today's society.  Collectively, each of these actors created characters that made for a sickening realization that people just like them live among us and are easily disregarded. 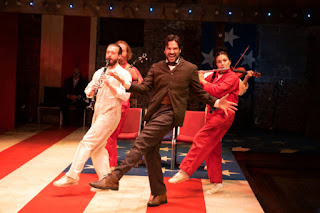 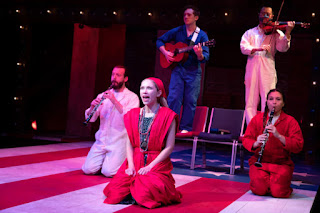 Having seen the show at other local and regional productions, I can say that the two roles which uniquely stood out here did so in all the right ways, thanks to the perfect casting of two amazing actors. One of those, Will Swenson, I've had the pleasure of watching perform several times, and here makes a meal out the delusional Charles Guiteau, all impish grins, awkwardness and stunning self-absorption. He disappeared in this role. The other, Tavi Gavinson, is new to me, and I'm already looking forward to what I am certain will be a long, storied career from her. Other times, I've always felt that "Squeaky" Fromme was more a whiner and crazy loon. Here I felt drawn to her; her passion about what she was saying drew me in, and her presence, humorous at times, was oddly intoxicating and that is a troubling admission. What a pair of performances! 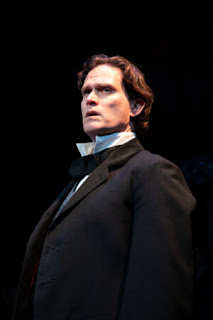 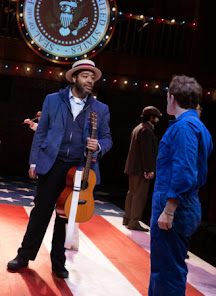 As much as this rogue's gallery is an ensemble piece, so much of it hinges on two roles - the one who started it all: John Wilkes Booth, and the last successful one: Lee Harvey Oswald. And here, both are embodied by actors giving masterful performances. Steven Pasquale's Booth is a frightening mix of pompous hilarity (he sees it all as a colossal joke) and cruel arrogance. Beautifully sung, and thrilling in its intensity, this is a pure star turn. Ethan Slater does a lot of the heavy lifting here as both the Balladeer and Oswald. With the benefit of having seen the whole thing, I can fully appreciate how Slater (and Doyle) uses his time as the narrator of the piece to insinuate himself into the other assassins' scenes, commenting, of course, but always with an amused but smug grin on his boyish all-American face. Somehow, that makes his transition into becoming a full-fledged member of a growing cult all the more powerful. Gone is the grin, replaced by a disturbing fury.
There is still so much I need to unpack from my mind. It raises as many questions as it provides answers. We are a sick country, full of people crying out to be seen and heard. Attention must be paid.
With news today of their cut run, we are so grateful to have experienced this superlative production. Bravo! And thank you all.
📸: J. Kyler, J. Cervantes
Posted by JK at 6:00 PM