Broadway Books Review: West Side Story: The Making of the Steven Spielberg Film 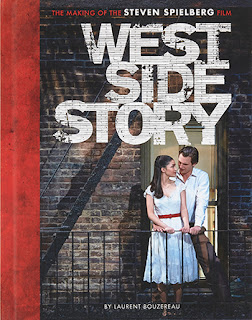 Review of West Side Story: The Making of the Steven Spielberg Film by Laurent Bouzereau. Illustrated by 20th Century Studios. Color photos and art work. 256 pages. Hardcover. Published by Abrams Books. Release date November 16, 2021. Grade: A+
I am huge fan of the new film version of West Side Story by Steven Spielberg, so of course when I saw this book, it immediately went on my Christmas list. Anything to do with the property piques my interest. This volume is a wonderful addition to my library, and I can highly recommend this to any of you who have an interest in this new version, the original film, or the original Broadway show.
While the main focus, obviously, is the new film, there is quite a bit of material about the making of the show and its creators. Hearing directly from Stephen Sondheim about the genesis of the project lends the stories we are familiar with a nice air of authenticity. Similarly, a fair amount of space goes to the background of the 1961 film, provided by Sondheim, the descendants of Leonard Bernstein, and original stars Russ Tamblyn and Rita Moreno. The latter, of course, offers a unique perspective on both films. 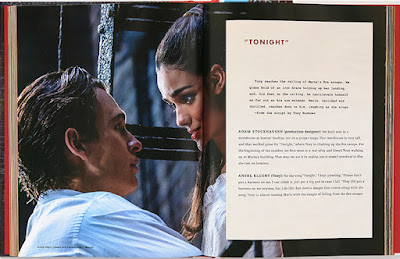 A love for musical films (and musicals in general) and the importance of deepening the characters, story and themes are what brought Spielberg and screenwriter Tony Kushner together to create a West Side Story that is both timely and timeless. The joy the director felt while making this film is evident in every passage of his, as is his pride in the unique collaborative opportunities the project afforded him. Reading about the reasons behind the changes in the script are fascinating, as well as some of the extra work Kushner did for the cast of the film. He ended up creating elaborate backstories for each character, from leads to each Jet and Shark and their girls - including some 25 pages for Moreno's character, Valentina! 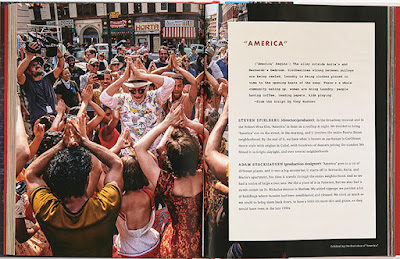 What is particularly fun about this "making of" book is that everyone involved in the film, cast and crew alike, offers insight into everything from special filming techniques to audition processes (Ariana DeBose's anecdotes are particularly enlightening), to on set stories from the dancers. I found particular interest in the section where Mike Faist details working with the costume designer to select Riff's tattoos, shirts, and even jewelry. (His Riff wears a necklace that once belonged Riff's mother.) Another passage from Paloma Garcia-Lee (Graziella) brings out some insight into the enhanced roles of the women in the picture, who instinctively try to protect Anita from the Jets instead of going quietly. 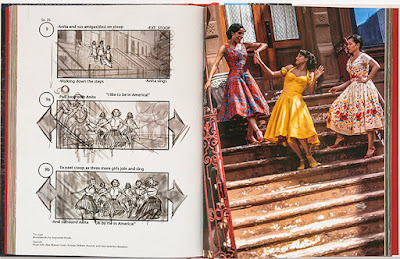 The way the book is set up also adds to the experience, with extensive chapters on the background of the piece and the development of the project. Then, there are sections devoted to each musical number in the order in which they appear - everything from the context of each, details of any and all changes from the original material, and, in many cases, shot by shot details of each sequence. All of this is told not only from interviews, but through hundreds of storyboard images, art renderings, costume designs, and (best of all) movie stills and behind-the-scenes photos.
I look forward to revisiting whole sections of this book. Even more, I look forward to keeping this handy while watching it again. This book is truly a must-have for fans of musicals, musical films, and the masterwork that is West Side Story.
Posted by JK at 7:00 AM