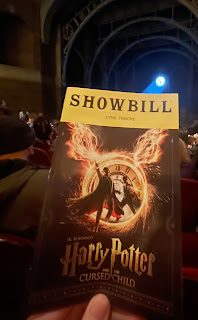 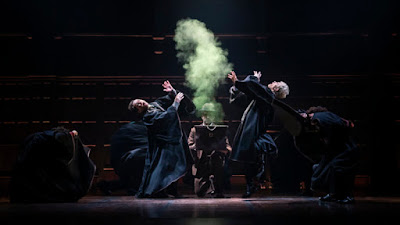 Having loved the original two-part experience - especially all of the magic - I was very interested in seeing how they condensed Harry Potter and the Cursed Child into a one-part adventure. In short, the new version is as delightful, and in some ways more so, as the original. Though I will attempt to #keepthesecret, I can't promise that I won't give something away. Playwright Jack Thorne and his collaborators have most notably excised a good deal of backstory (sorry Hagrid fans), and filled in some of the blanks with small amounts of exposition in the dialogue. By and large, all of the trimming and re-writing has tightened the same story and really sharpened its major themes, namely reconciling ones expectations of ones children, and the unintended consequences of ones actions, not only on oneself, but on future generations as well. Brought to the fore, and, as played at least, is also the bond of friendship and all of its consequences. Harry Potter has always been about friendship, but this newest version of the story also explores a far-reaching extension of deeper feelings, and yes, love between the two young men who are at the center of the action. 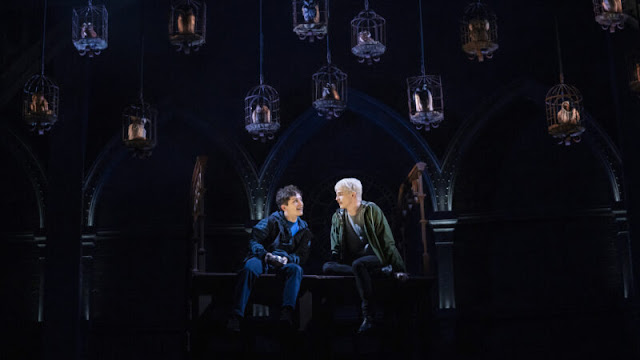 All of this was present in the original version, but the change in emphasis is clear. The young actors who portray Albus Potter and Scorpius Malfoy, James Romney and Brady Dalton Richards, respectively, have a near instantaneous and palpable chemistry. It is particularly interesting to watch them navigate these new feelings while still trying to come to terms with everything else that makes them feel like outsiders, notably the assumptions made about them because of who their parents are. Also impressive is that both actors have created new takes on established performers - no carbon copying here. Richards' way with being so unabashedly quirky while being completely unsure of himself, and Romney's brooding contempt for his father while being terrified to be himself are the perfect way to see why each would be drawn to the other. These roles were large to begin with, but in this version, these two carry the weight of most of the play on their backs, and it couldn't be in better hands. Watch for these fine actors in the years to come. 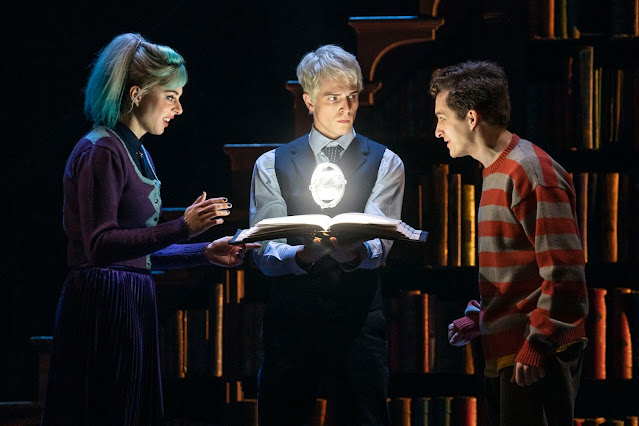 Winning performances from Nadia Brown as Ron and Hermione's people-pleasing, if somewhat bigoted daughter, and Michela Cannon as an ultra cool next generation Diggery round out the next generation of Hogwarts students. It was fun to watch Ms. Brown navigate the tricky road from adolescent snob to accepting young adult. Can't say much about Ms. Cannon's performance as I don't want to give anything away here, but I will say she was wicked fun from start to finish. 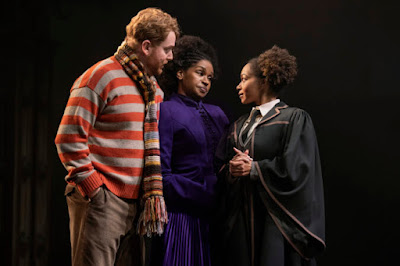 As the adult versions of the characters we all grew to love in books and movies, Steve Haggard (Harry), David Abeles (Ron), and Jenny Jules (Hermione), are an interesting trio. Haggard's Harry is crushed by the weight of expectation, and his anger over it is misdirected at his son; Jules' Hermione is at the top of her game, but as usual, struggles with the burdens of muggle-dom and always having to keep her friends on track; and Abeles' Ron is as lovably goofy and awkward as ever, but the strains of reputation, family and responsibility are heavy on him. All three play this very well, occasionally infusing some of the characters' beloved idiosyncrasies into their portrayal, much to our delight. However, it is when the they have the chance to be children again, that all three actors really soar - you can sense that they really enjoy this part of the story. And, in turn, seeing this side of them, makes their return to parenthood just that much more urgent and poignant. 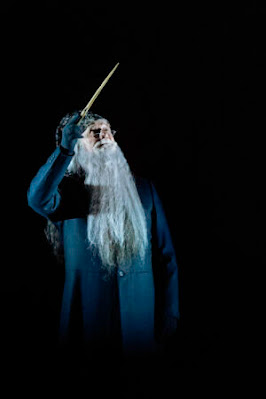 Although portrayed as adults now, both Draco Malfoy and Ginny Weasley-Potter are a keen presence in this play, and both Aaron Bartz and Judith Lightfoot Clarke wisely do not rely on only giving us what we expect from them, instead carefully revealing themselves to be excellent parents. In fact, both actors make plain that often they are the only real adults in the room, which adds a delicious layer to things when all must unite at the end. Other beloved (and not so) characters are given fine performances as well: Stephen Spinella as both Snape and He Who Shall Not Be Named is both menacing and fun, and thankfully never campy. Similarly, Karen Janes Woditsch does double duty as McGonagall and Delores Umbridge; the former the sassy tower of strength, the latter, so wicked she actually was hissed by the audience! And Edward James Hyland garnered sighs of relief as he appeared in a painting as Dumbledore, wise, yet troubled, and rather forthcoming about his love for Harry - perhaps a hint that he knows his namesake's truest inner feelings for Scorpius, and wants Harry to acknowledge that? 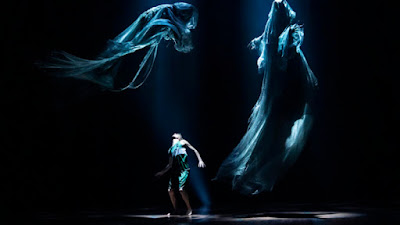 The entire company (and I mean that in every sense of the word) is sharp and focused, and look to be truly enjoying taking us along for the ride. Not only do they all take on multiple roles, they dance, create magic, move scenery and set the stage in a staggering amount of formations. John Tiffany's tight, truly magical direction transports us gratefully to another world. Steven Hoggett's thrilling choreography to Imogen Heap's equally thrilling music remains a highlight. "The Wand Dance" is still a favorite of mine. We sat closer this time, and I hoped maybe I'd be able to see how some of the more elaborate illusions (by Jamie Harrison) were done, but no. Actually I'm glad - for three and a half hours, magic was real, and I needed that. All of the gasp-inducing elements are still there on Christine Jones' magic box set, under Neil Austin's ethereal lights, and swirling around in Katrina Lindsay's cavalcade of costume delights.
Cursed Child remains an entertaining delight, and I for one hope to return soon.
📸: J. Kyler, M. Murphy
Posted by JK at 4:12 PM